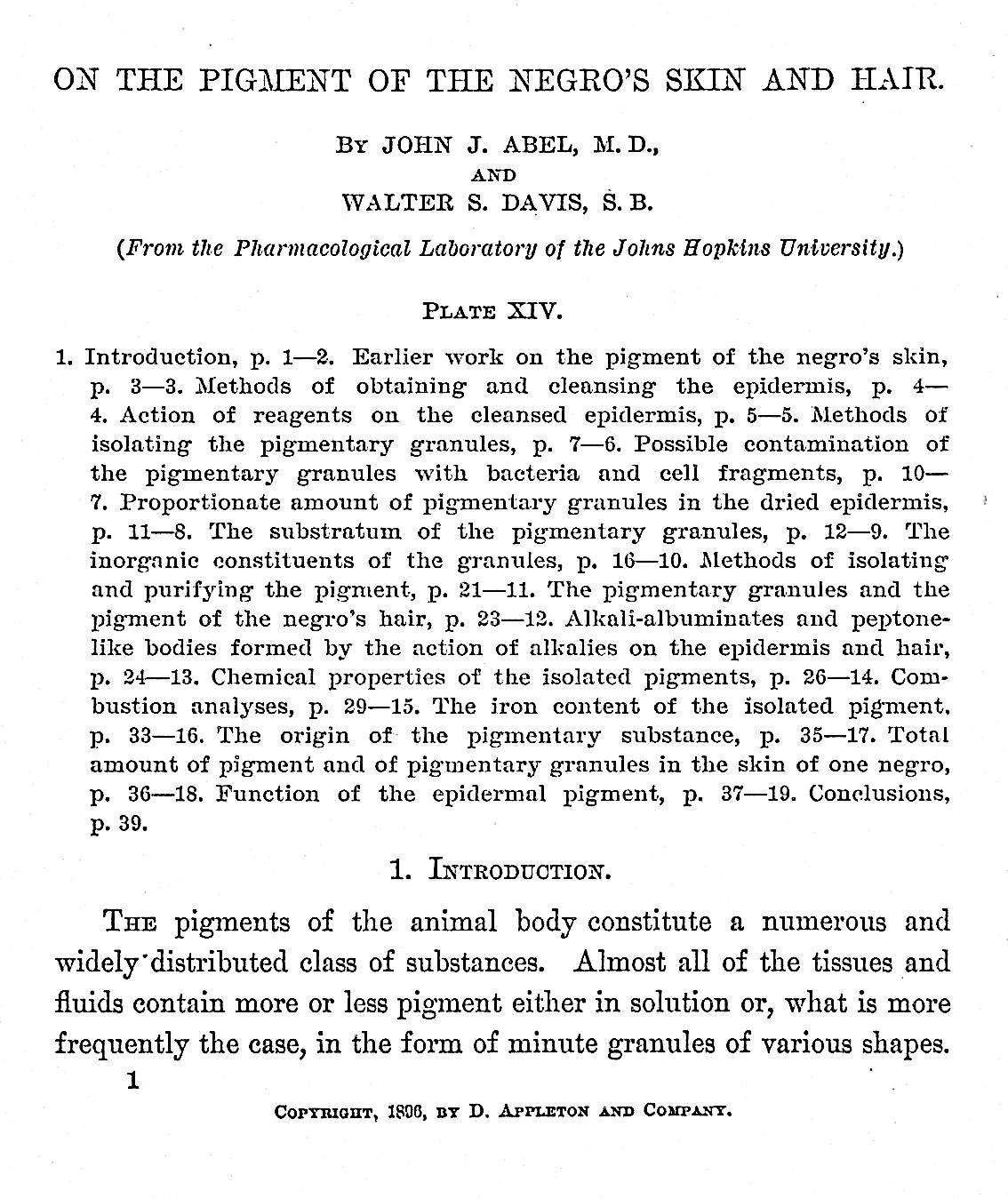 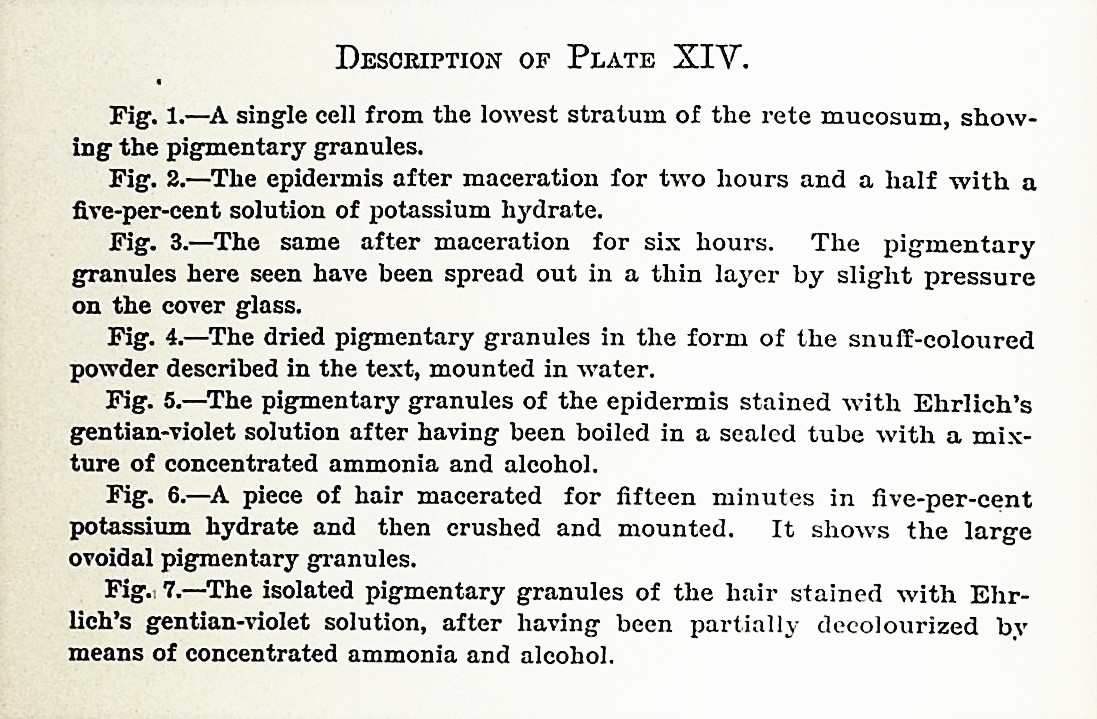 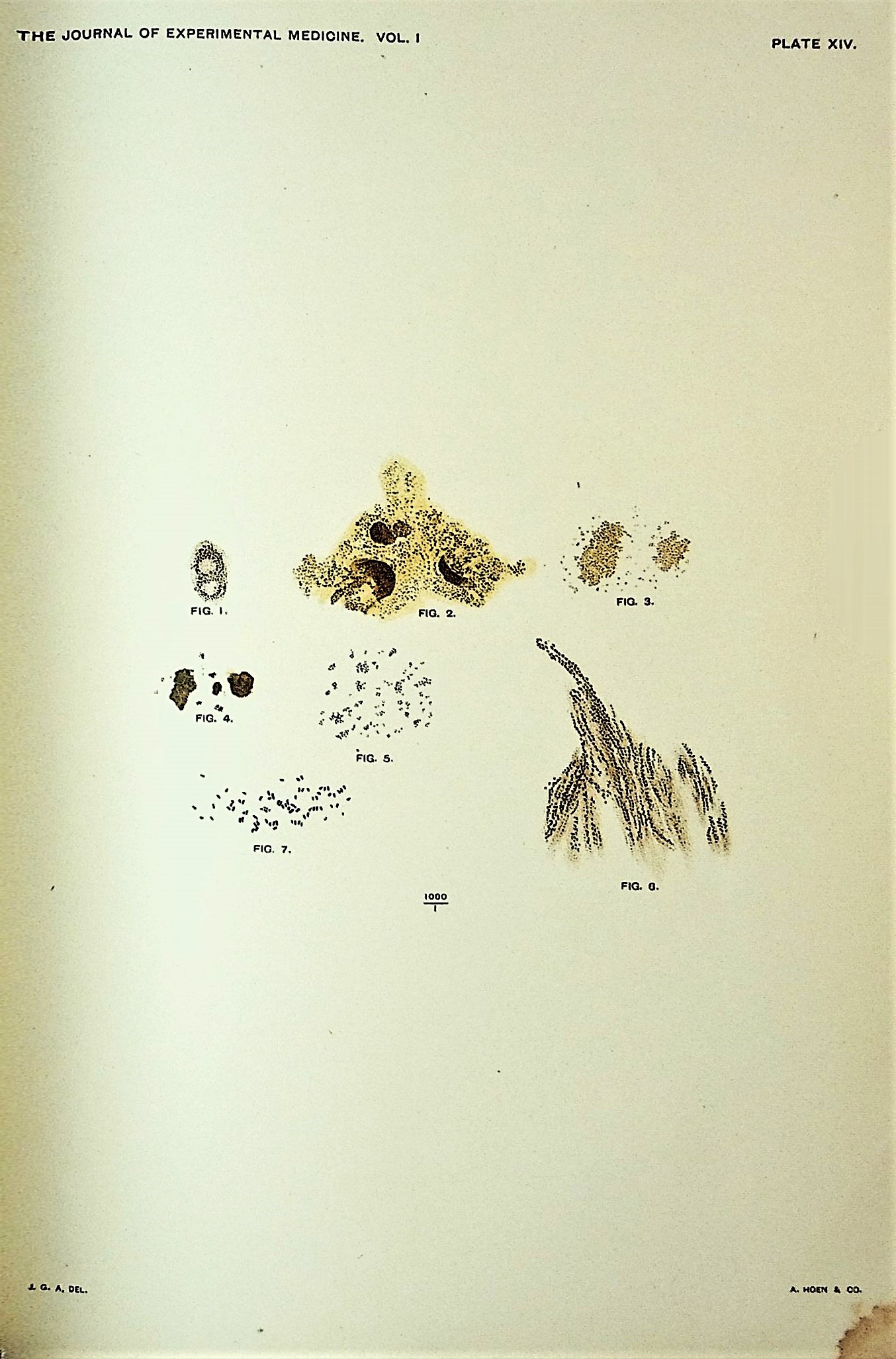 On the pigment of the Negro's skin and hair

1896 SCARCE STUDY OF THE BASIS FOR SKIN PIGMENT VARIATION AMONG RACES BY LEADING AMERICAN PHARMACOLOGIST JACOB ABEL--INSCRIBED AND SIGNED BY HIM. 9 1/2 inches tall offprint in gray printed paper covers, inscribed and signed by author on cover, 40 pages, color plate. Wear to top of spine, top back cover chipped, signature of previous owner and pale handstamp Histologie, College de France top of cover, text pages unmarked, small water stain to bottom corner of pages, not affecting text, very good minus. THE JOURNAL OF EXPERIMENTAL MEDICINE was established in 1896 at the Johns Hopkins School of Medicine by William H. Welch, the school's founder and also the first president of the Board of Scientific Directors of the Rockefeller Institute. JOHN JACOB ABEL (1857-1938) was an American biochemist and pharmacologist. He established the pharmacology department at Johns Hopkins University School of Medicine in 1893, and then became America's first full-time professor of pharmacology. After his doctorate, Abel worked mostly in clinical studies and took clinical courses, focusing on biochemistry and pharmacology. He traveled around Europe, mostly in Germany and central Europe, conducting research in biochemistry. During this time, Abel had a number of mentors that inspired his work and exposed him to a number of disciplines that eventually prompted him to work in biochemistry and pharmacology. Finishing his time in Europe, Abel returned to the University of Michigan as the chair of Materia Medica and Therapeutics. There, he played an important role in developing the first pharmacology department in North America. He only was at the University of Michigan until 1893, when William Osler of Johns Hopkins School of Medicine asked Abel to come to the school and accept a Professorship of Pharmacology. At Johns Hopkins, Abel was the chair of pharmacology and biological chemistry, until the departments split in 1908, when Abel became the chair solely of the Department of Pharmacology until he retired at the age of 75 in 1932. The first work that led to his international reputation as a pharmacologist and biochemist was the isolation of epinephrine from adrenal medulla. Together with L.G. Rowntree and B.B. Turner, Abel devised what they called a vividiffusion apparatus, consisting of a series of tubes surrounded by fluid. Not only did Abel use the apparatus for his research work, he also realized the great clinical potential such dialysis machine would have on managing the damaging effects of renal failure. The vividiffusion apparatus Abel devised is the precursor to the modern day dialysis machine. Abel also pioneered the study of insulin, succeeding in crystallizing the protein and contributing to its therapeutic development in the treatment of diabetes. COMMENT ON THE PAPER OFFERED HERE: This paper was published 31 years after the end of the Civil War, the year that Jim Crow laws were upheld in the case of Plessy vs. Ferguson, in which the U.S. Supreme Court laid out its separate but equal legal doctrine for facilities for African Americans. Importantly, The last paragraph of the paper reveals that Abel was not only a brilliant scientist, but concluded that racial differences in skin color reflect variations in the quantity of the same pigment (melanin): "The pigments of the epidermis and hair of the negro are very likely identical. In the present state of our knowledge we can only say that it seems highly probable that the pigment of the negro's hair is not different from the dark pigment found in the hair of the white races, and we may infer that the pigment of the black skin differs only in amount and not in kind from that deposited in the skin of the white man."

Title: On the pigment of the Negro's skin and hair

Publisher: The Journal of Experimental Medicine: 1896

Inscription: Inscribed and signed by author

On the pigment of the Negro's skin and hair