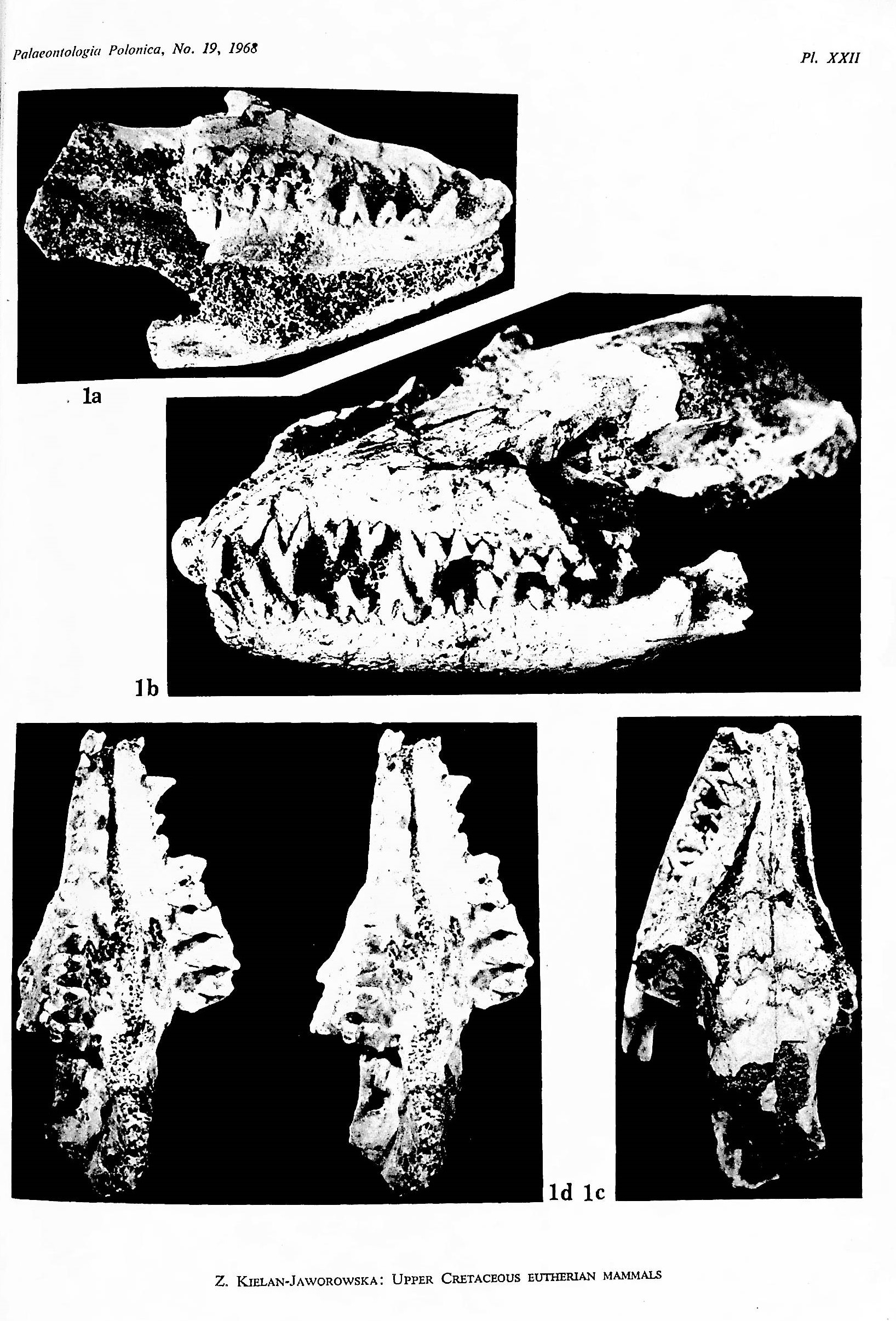 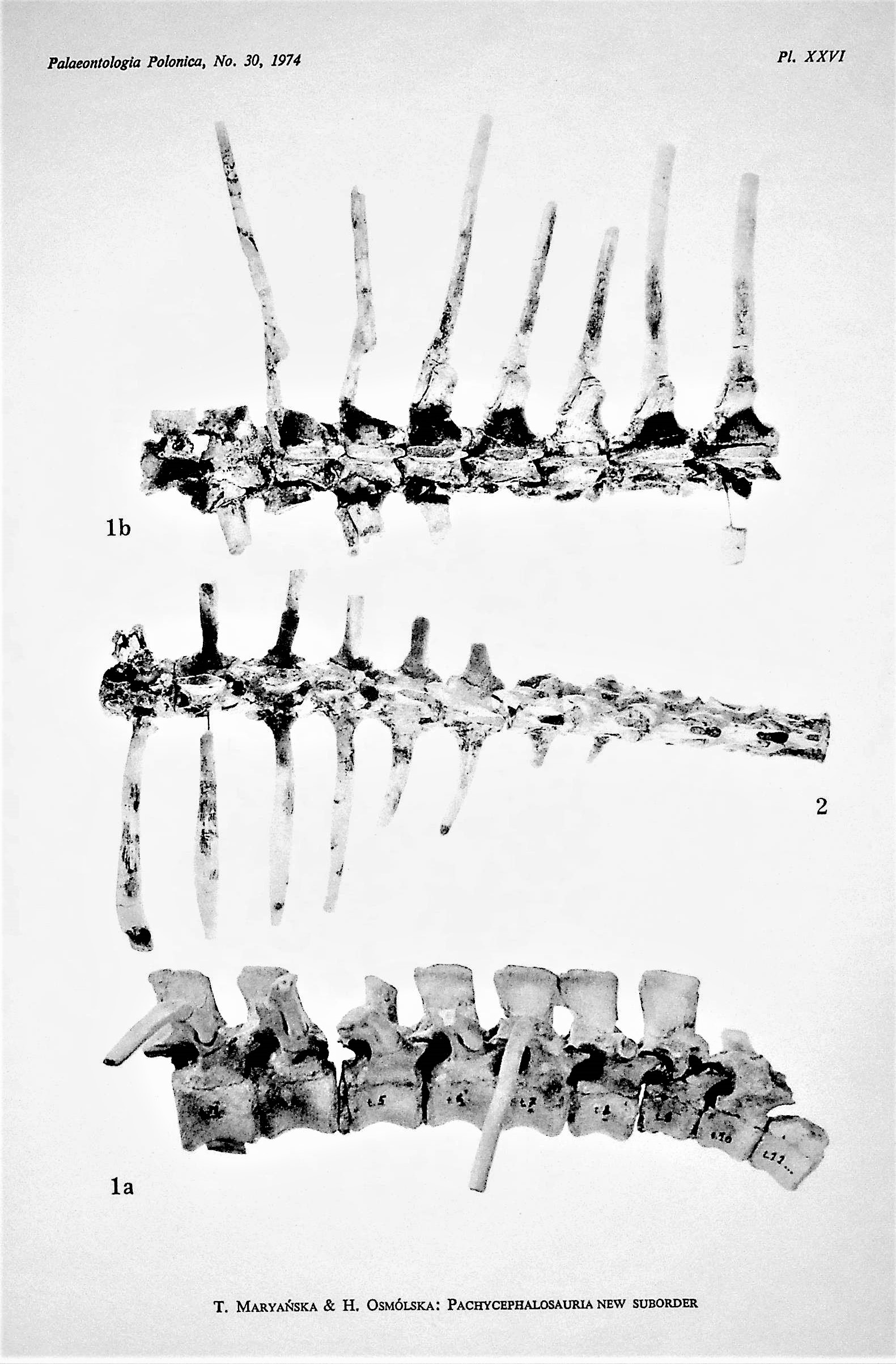 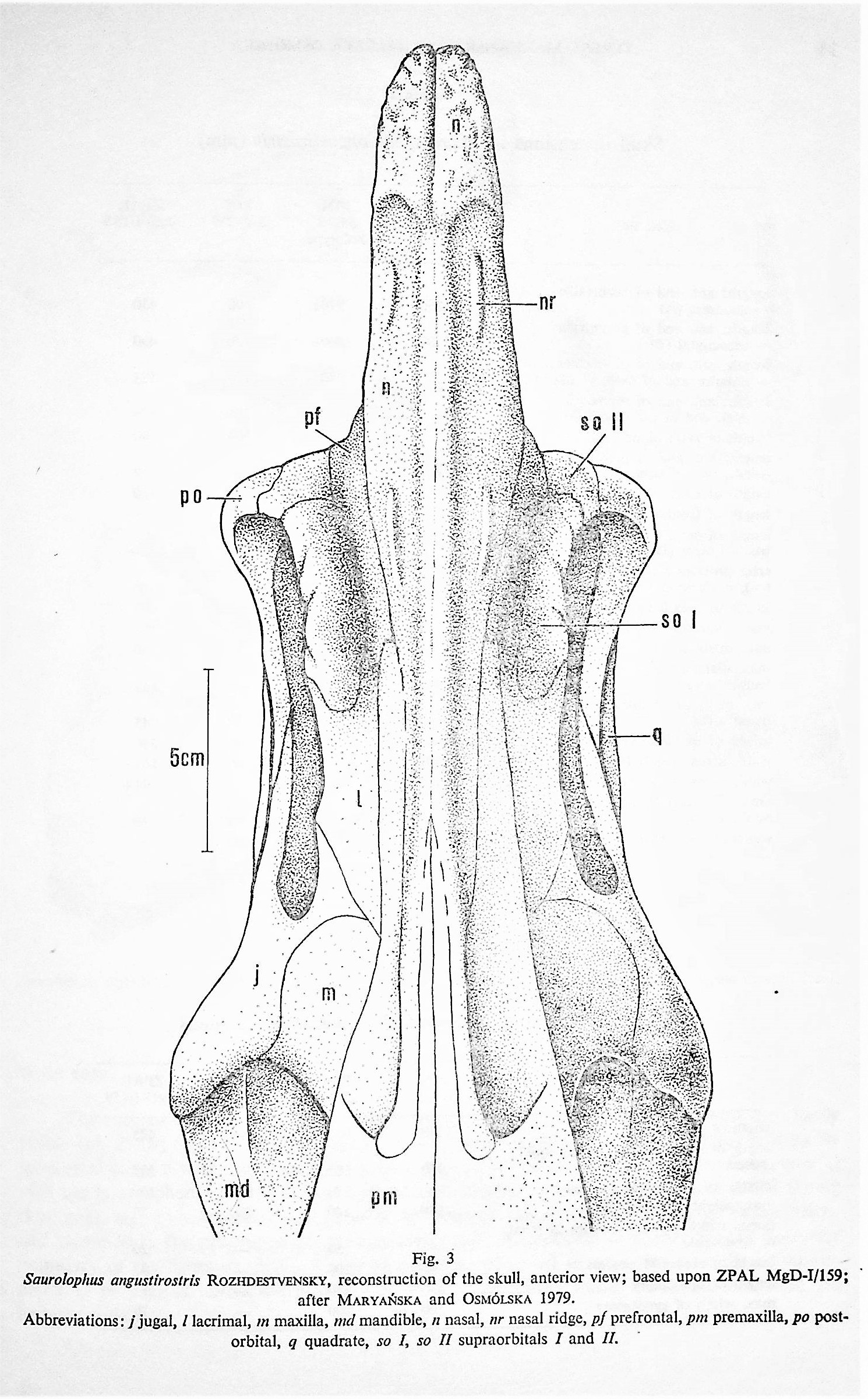 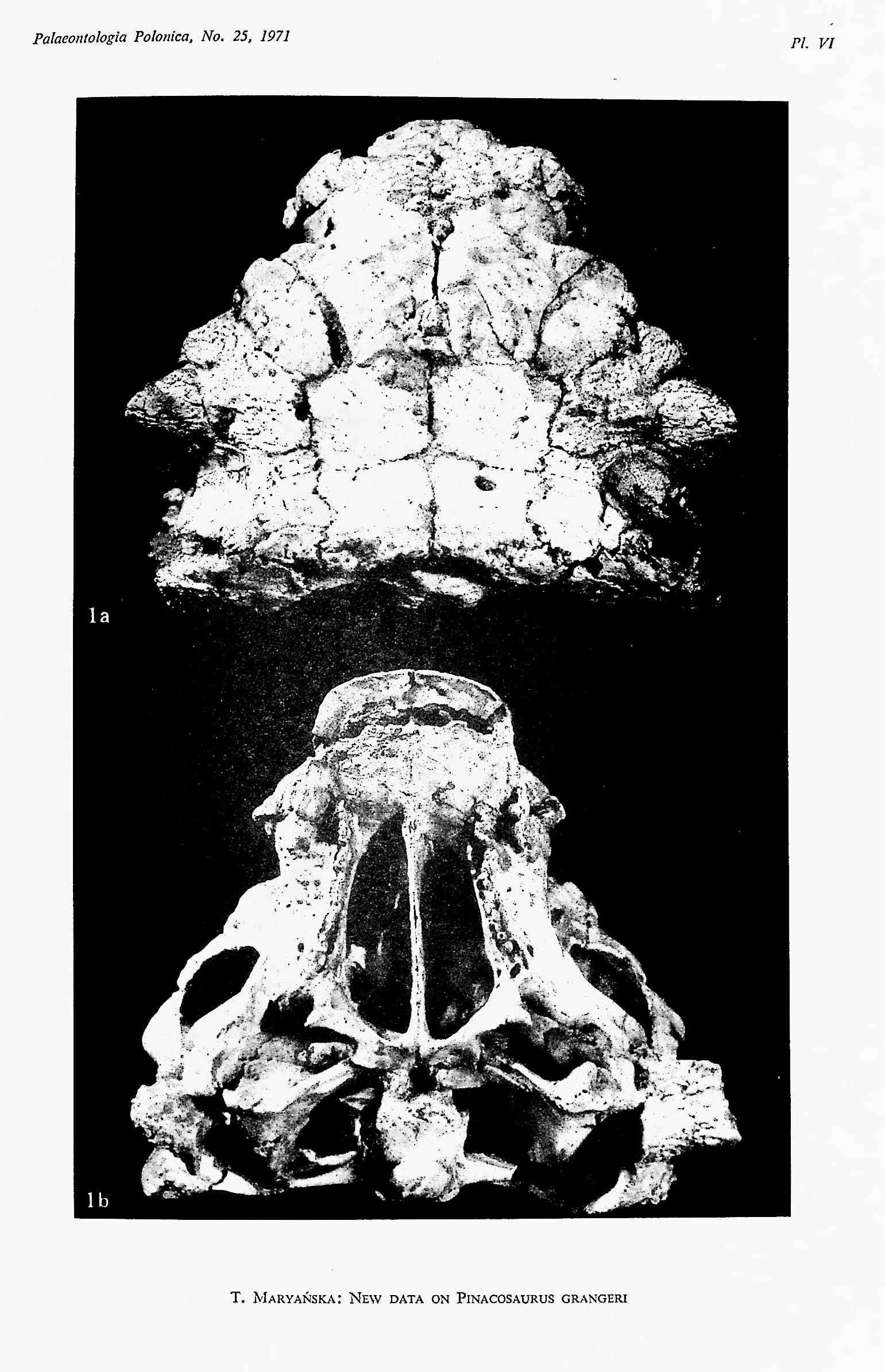 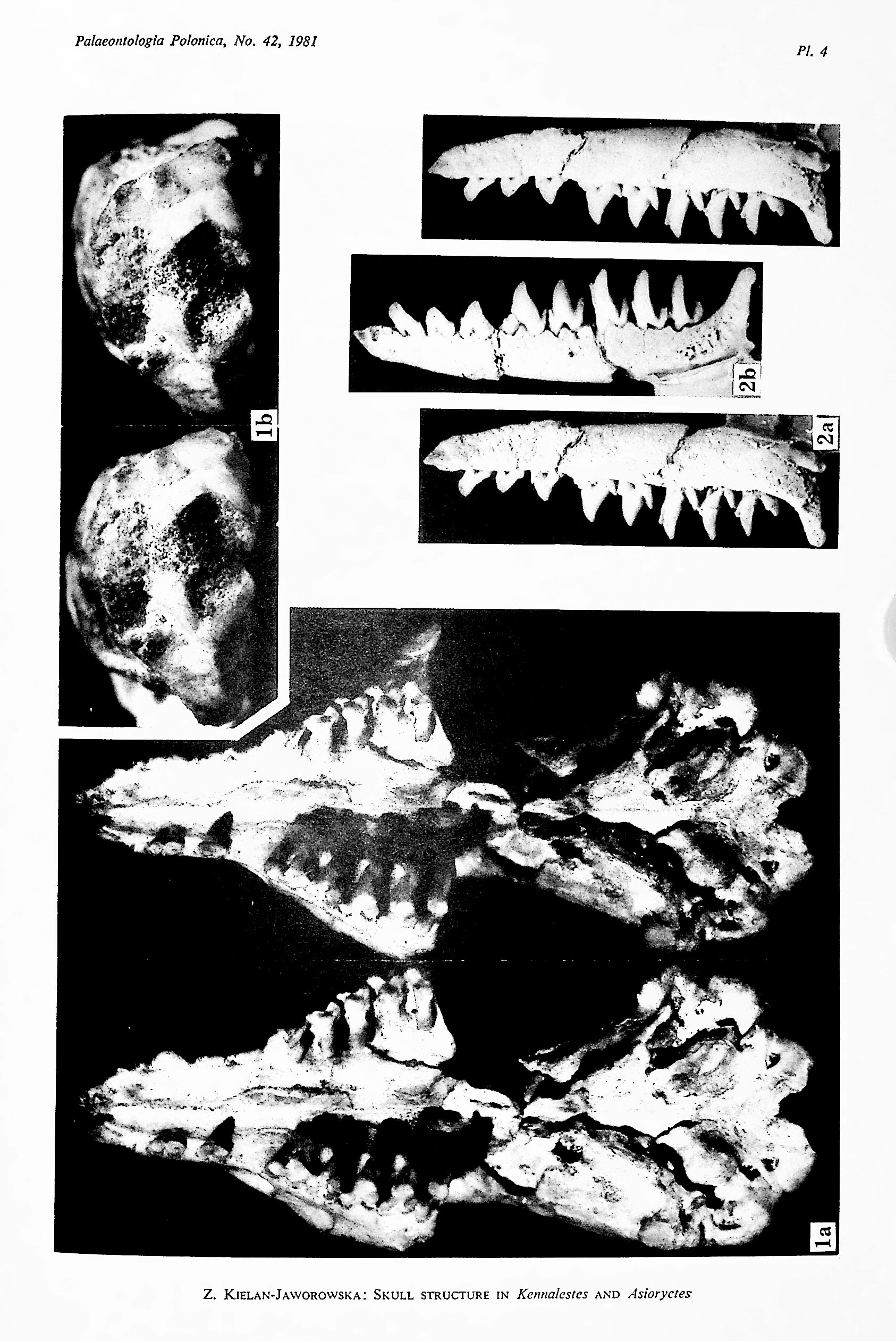 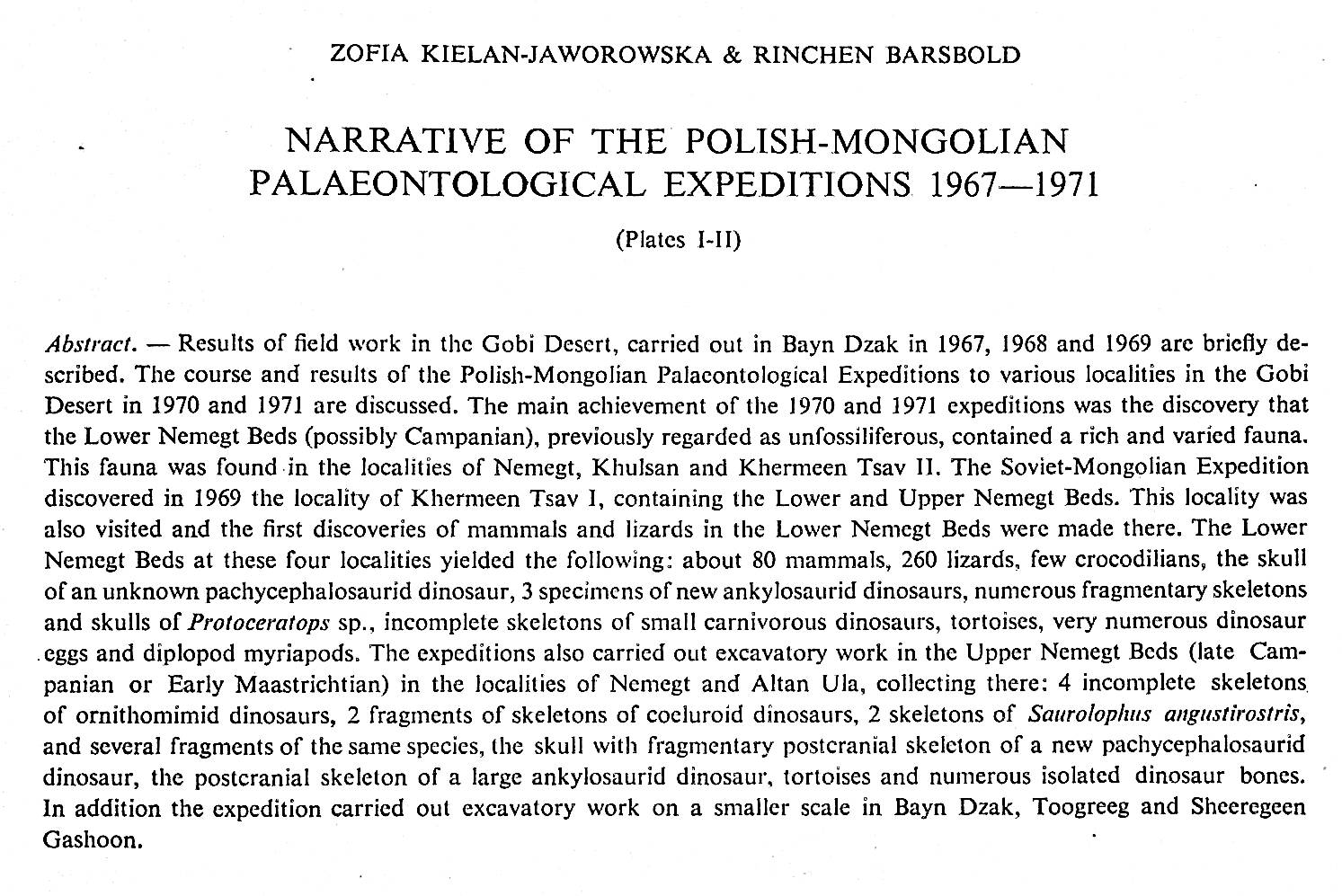 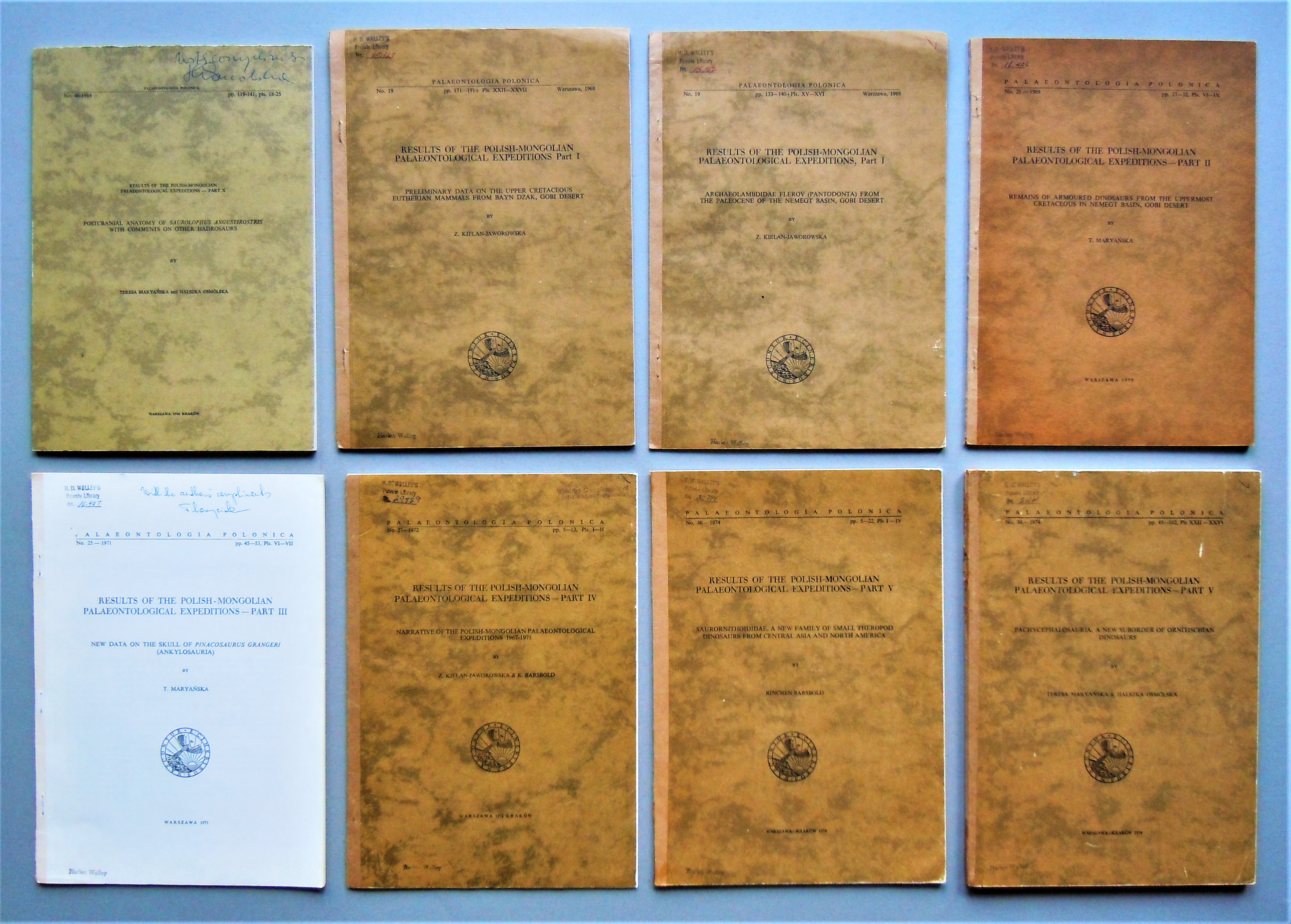 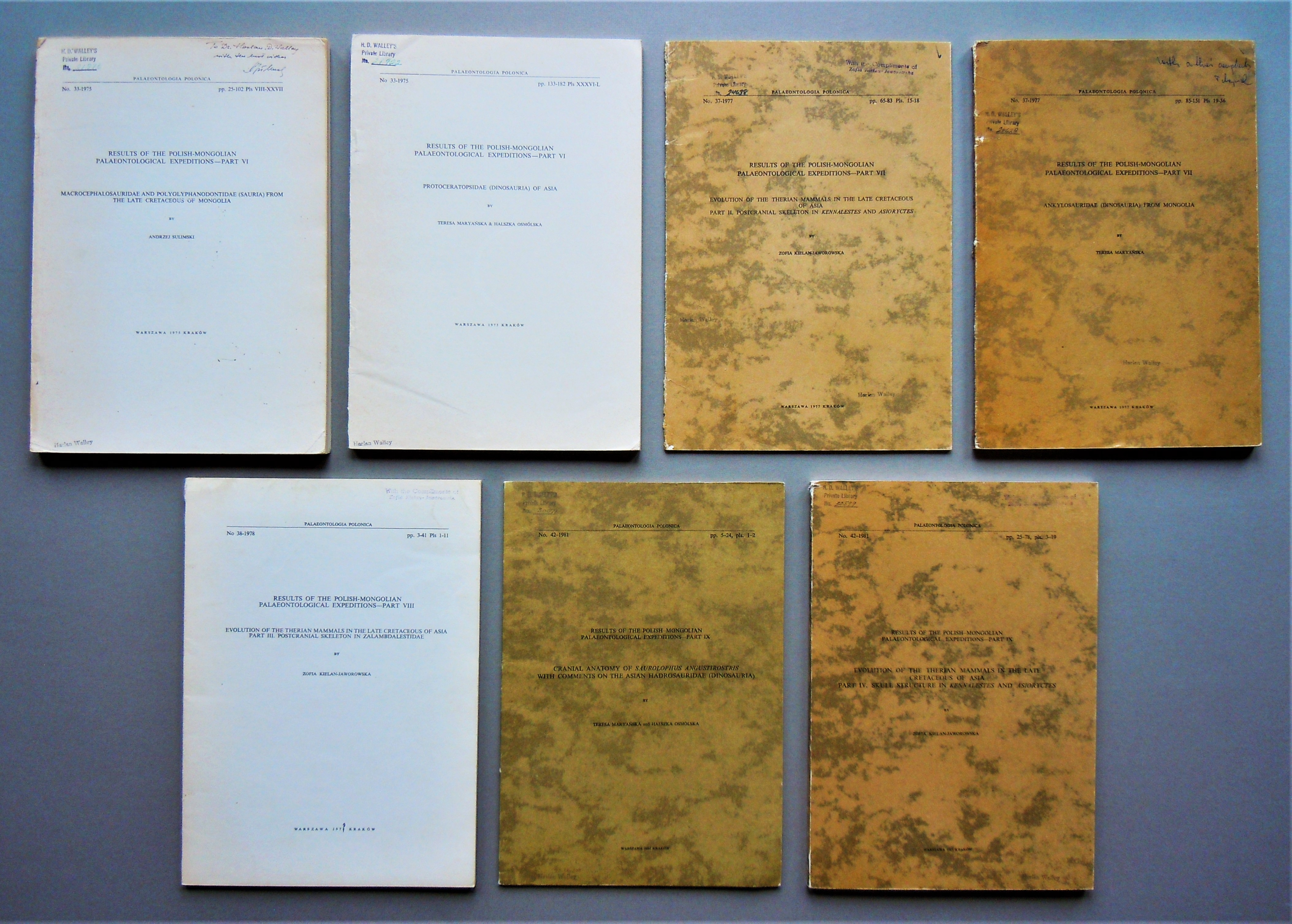 FIRST EDTION ILLUSTRATED OFFPRINTS OF LANDMARK POLISH-MONGOLIAN PALEONTOLOGICAL EXPEDITIONS LED BY ZOFIA KIELAN-JAWOROWSKA, DISCOVERER OF EARLY MAMMALS. Fifteen 11 ½ inches tall offprints in original printed mottled brown stiff wrappers or white printed wrappers (as issued from publisher, 550+ pages, 140+ black & white plates, numerous text figures. Handstamp of Harlan D. Walley to cover of each volume, 4 parts are stamped "with the compliments of Zofia Kielan-Jaworowska", 3 parts are inscribed by author Teresa Maryanska, 1 part is inscribed by author Andrzej Sulimski, and 1 part is inscribed by author Halzska Osmolska. The paper on a few of the spines show minor cracking, the text and plates are bright and clean with no signs of use; tight, very good cop1es. Palaeontologia Polonica 19 (2 parts), 21, 25, 27, 30 (2 parts), 33 (2 parts), 37 (2 parts), 38, 42 (2 parts) and 46. Part IV contains an overview of the expeditions: "Narrative of the Polish-Mongolian Paleontological Expeditions, 1967-1971" by Zofia Kielan-Jaworowska and R. Barsbold. Nine parts announce new discoveries of dinosaurs from the Polish-Mongolian Palaeontological expeditions - three titles include: "Pachycephalosauria, a new suborder of ornithischian dinosaurs" (part V), "Protoceratopsidae (Dinosauria) of Asia" (part VI), and "Ankylosauridae (Dinosauria) from Mongolia" (part VII). Five parts present new discoveries of late Cretaceous and Paleocene mammals, two titles include "Evolution of Therian mammals in the late Cretaceous of Asia" (part IX) and "Archaeolambdidae Flerov (Pantodonta) from the Paleocene of the Nemegt Basin, Gobi Desert" (part I). ZOFIA KIELAN-JAWOROWSKA (1925 - 2015) was a Polish paleobiologist who led a series of Polish-Mongolian paleontological expeditions to the Gobi Desert. In his obituary of Kielan-Jaworowska (Nature, 9 April 2015), Richard L Cifelli wrote: "Much of what we know about the origin and early evolution of mammals stems, directly or indirectly, from the work of Zofia Kielan-Jaworowska. Her greatest achievement was the collection of fossils amassed by several Polish “Mongolian expeditions to the Gobi Desert (1963 - 71), which she led. She also discovered species of crocodile, lizard, turtle, dinosaur and bird. The Gobi specimens, which include skulls and skeletons, are unprecedented in their variety, number and completeness. Kielan-Jaworowska spent half a century describing and interpreting them while forging scientific exchange from Poland through the Iron Curtain. The fossils altered views on mammalian history, and stimulated discoveries around the world. Polish-Mongolian parties made several spectacular discoveries of Late Cretaceous vertebrates (about 80 million to 75 million years old) in the Nemegt Basin, including the "fighting dinosaurs" (a kick-boxing Velociraptor locked in a death pose with a plant-eating Protoceratops), the awesome forelimbs of Deinocheirus (an ostrich dinosaur) and the mammal specimens she would go on to study. As fossils from the expeditions came pouring in, she navigated cold-war roadblocks to establish ties with leading Western scholars, notably those in Britain, France and the United States, anticipating political glasnost (openness) by a good two decades. She built a science network from her hub in Warsaw, with spokes running to research programmes worldwide. For a discipline built mainly on the study of fossil teeth and jaw fragments, Kielan-Jaworowska's discoveries were a game-changer. Because of their stunning completeness, the species she painstakingly collected and described have become points of reference in the study of early mammals. The Gobi specimens underscored the fact that new fossils can upend decades of entrenched wisdom. Deltatheridium, for example, found in the 1920s, was long thought to have been a peculiar sort of placental mammal (the group that dominates today). Her specimens showed that it is actually closely related to marsupials. Kielan-Jaworowska set into motion a remarkable new age of exploration and discovery. PROVENANCE: From the private library of herpetologist Harlan D. Walley (1932 - 2008), Biologist and Curator at Northern Illinois University in DeKalb, for 35 years.