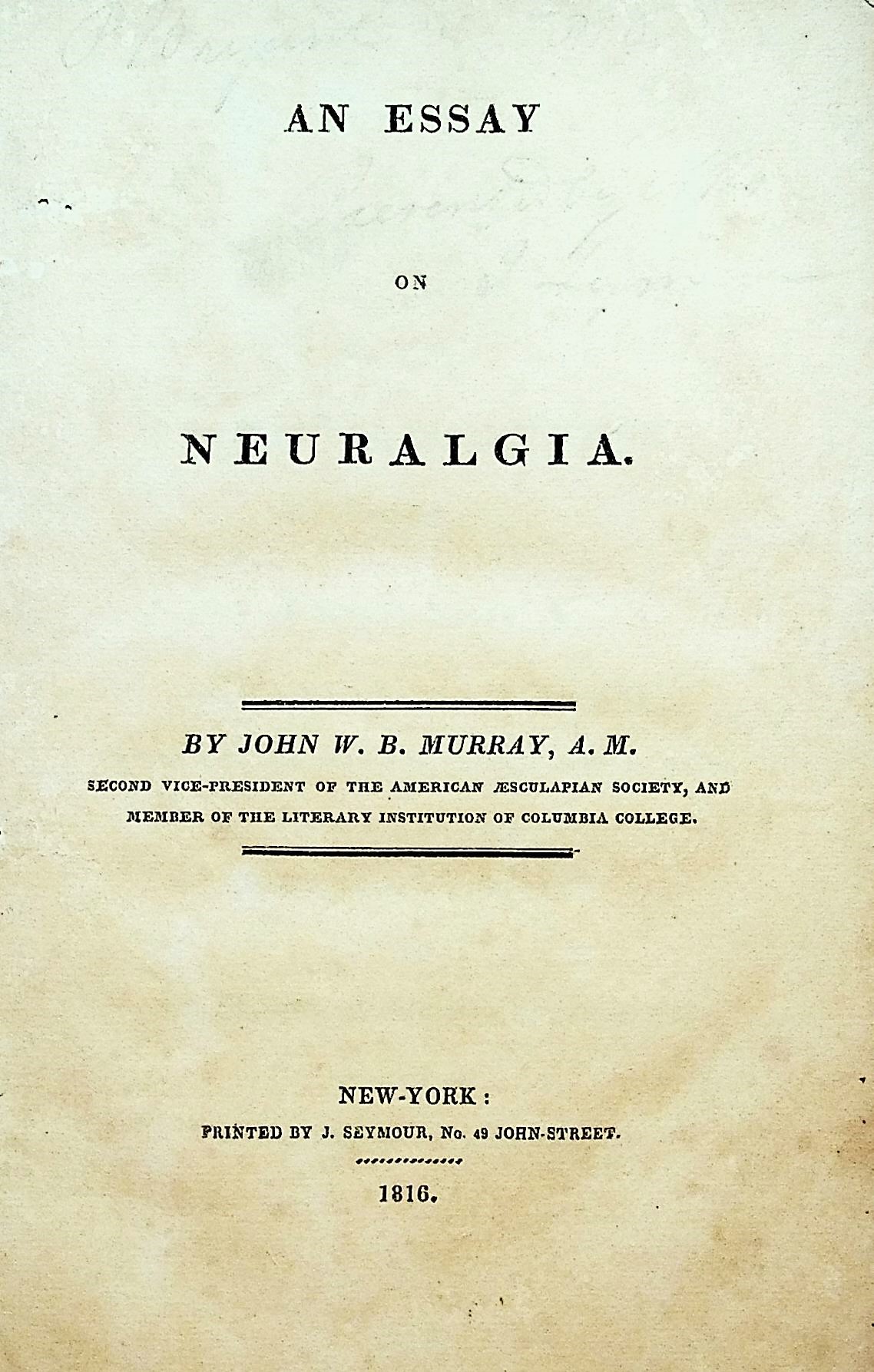 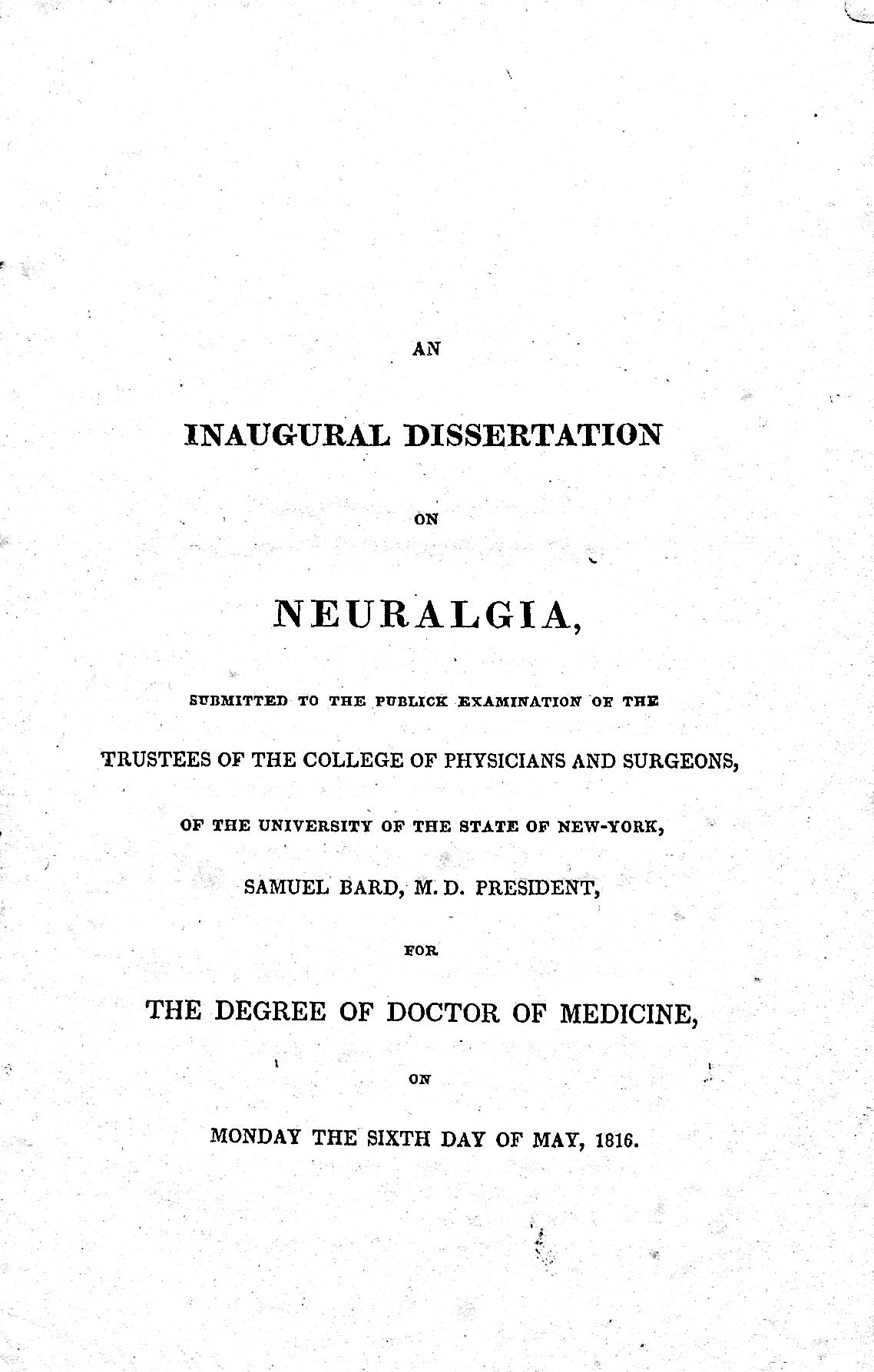 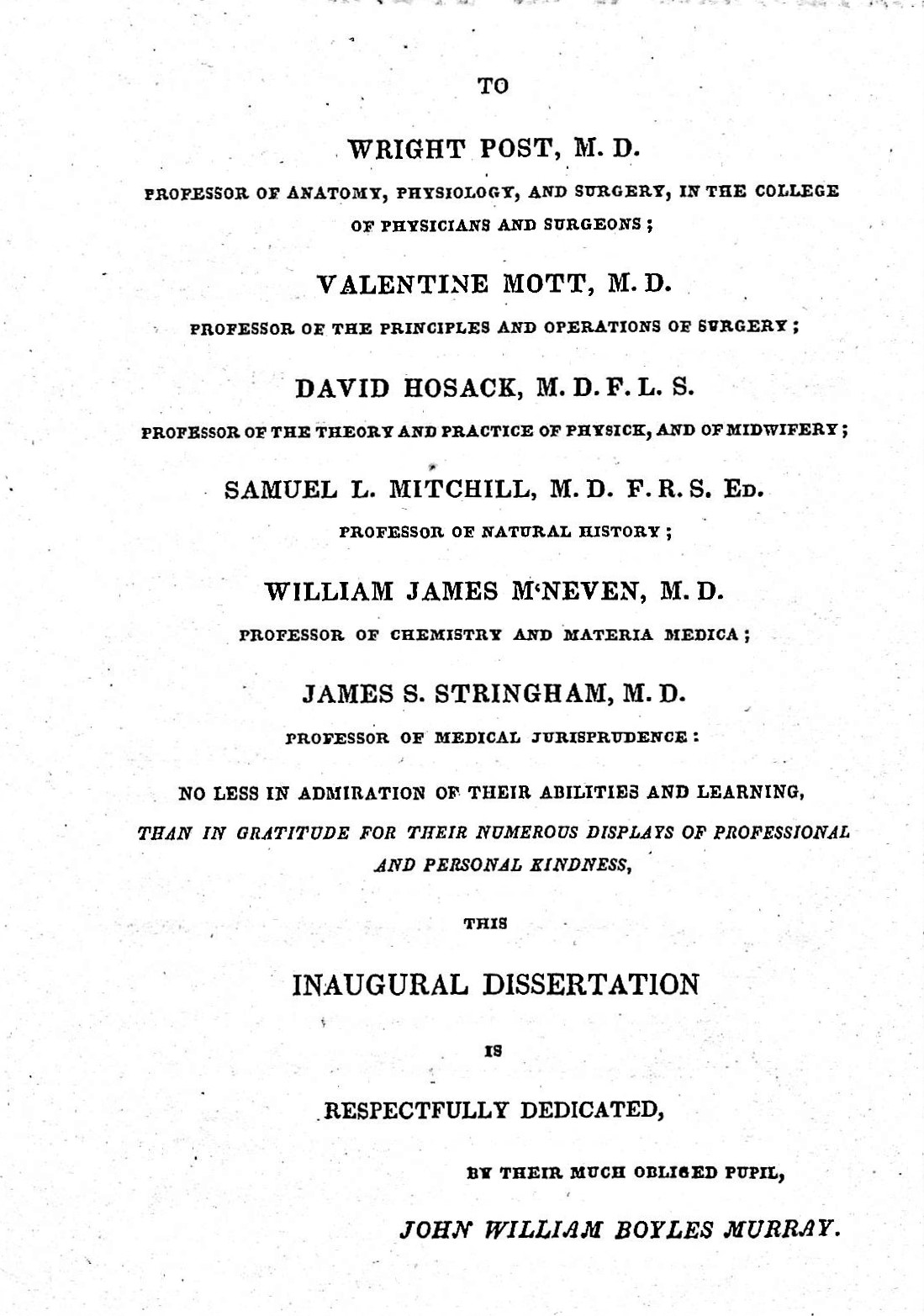 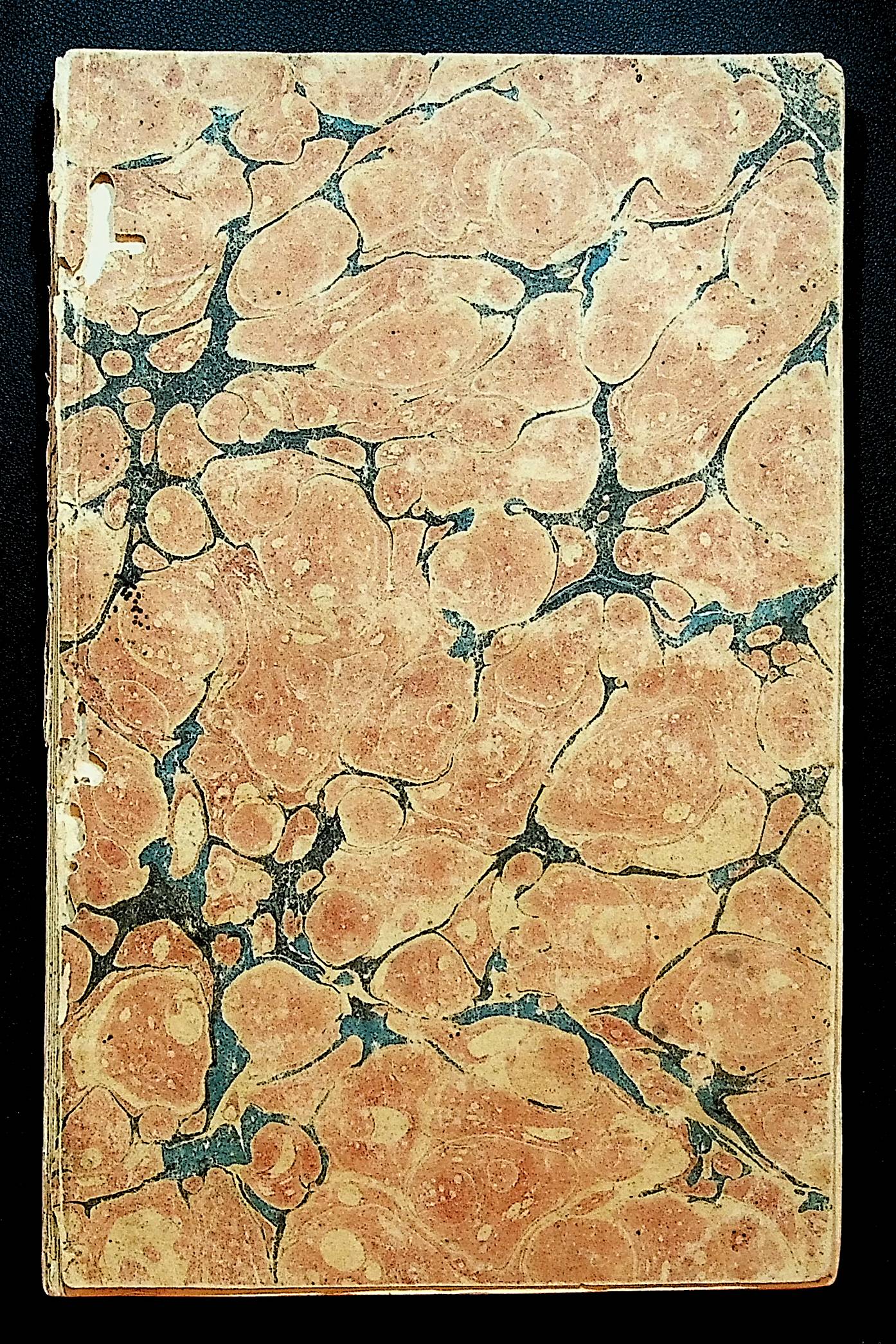 An Essay on Neuralgia

1816 DISSERTATION FOR THE M.D. DEGREE AT C. P. & S., NEW YORK, DEDICATED TO PROFESSORS WHO WERE LUMINARIES OF EARLY AMERICAN MEDICINE AND INSCRIBED TO HIS AUNT. 8 inches tall slim volume, marbled paper covers, spine perished, front cover separated from text, string binding secure, text block unmarked and very good. Ink inscription verso dedication page, "Sent by the author as an affectionate remembrance to his cousin Mrs. Lyman." The essay is "An inaugural dissertation on Neuralgia, submitted to the publick examination of the trustees of the College of Physicians and Surgeons, of the Univeristy of the State of New York, Samuel Bard, M. D. President, for the degree of Doctor of Medicine, on Monday the sixth day of May, 1816." and is dedicated to "Wright Post, M.D., Professor of Anatomy, Physiology, and Surgery, in the College of Physicians and Surgeons; Valentine Mott, M.D., Professor of the Principles and Operations of Surgery; David Hosack, M.D.F.L.S., Professor of the Theory and Practice of Physick, and of Midwifery; Sameul L. Mitchill, M.D.F.R.S.Ed., Professor of Natural History; William James McNeven, M.D., Professor of Chemistry and Materia Medica; James S. Stringham, M.D., Professor of Medical Jurisprudence: No less in admiration of their abilities and learning, than in gratitude for their numerous displays of professional and personal kindness, this inaugural dissertation is respectfully dedicated, by their much obliged pupil, John William Boyles Murray." The death of DR. JOHN WILLIAM BOYLES MURRAY (1792-1816) is listed in the obituaries of the January 4, 1817 issue of the Boston Columbian Centinel, "On his passage from London for Bordeaux, Oct 26, aged 24." His mentors in medical school all studied in Europe, and it would seem that Murray tragically died at sea on a voyage from England to France shortly after his graduation from medical school. Equally tragic, his mother, Oliva Lowrey, had died 2 months after his birth. His son, John Russell Murray, was born in 1815, the year before his father's drowning. Dedicatees of the dissertation include: WRIGHT POST (1766 – 1828), an American surgeon, born at North Hempstead, Long Island. He studied medicine for six years in New York and London, and began to practice in New York in 1786. In London he became one of favorite pupils of the revolutionary surgeon John Hunter. In 1792 he became a professor of surgery, and afterward of anatomy and physiology, in Columbia College. He visited the celebrated schools of Europe, and returned in 1793 with a splendid anatomical cabinet. In 1813 he became a professor of anatomy in the College of Physicians and Surgeons, and was its president from 1821 to 1826. Post was one of the pioneers among American surgeons, and was long remembered as a successful operator, especially in the ligation of vital arteries. VALENTINE MOTT (1785 – 1865) graduated from Columbia College, studied under Sir Astley Cooper in London, and also spent a winter in Edinburgh. After acting as demonstrator of anatomy he was appointed professor of surgery in Columbia College in 1809. From 1811 to 1834 he was in very extensive practice as a surgeon, and most successful as a teacher and operator. He is said to have performed one thousand amputations and one hundred and sixty-five lithotomies. DAVID HOSACK (1769 – 1835) was a noted American physician, botanist, and educator. During Hosack's first few years in medical practice, he concluded that the best practitioners had received at least some of their schooling in Europe, and convinced his father to pay his way to Britain in order to obtain such schooling. Upon arriving in the United Kingdom, Hosack matriculated at the University of Edinburgh, where he was trained by premier botanists. He ultimately became one of the leading American scholars of botany. Hosack returned to America by 1796, and established a practice in New York City. A good deal of Hosack's clinical work was as a family practitioner, including pediatric and obstetric care. He remains widely known as the doctor who tended to the fatal injuries of Alexander Hamilton after his duel with Aaron Burr in July 1804. SAMUEL LATHAM MITCHELL (1764 – 1831) was an American physician, naturalist, and politician who lived in Plandome, New York. He was sent to Scotland and graduated in 1786 from the University of Edinburgh Medical School with an M.D. In addition to his Columbia lectures on botany, zoology, and mineralogy, Mitchill collected, identified, and classified many plants and animals, and he was elected a Fellow of the American Academy of Arts and Sciences in 1797. From 1807 to 1826, he taught at the College of Physicians and Surgeons of New York. On January 29, 1817, Mitchill convened the first meeting of the New York Academy of Sciences, originally called the Lyceum of Natural History, of which he was later elected President. WILLIAM JAMES McNEVEN (1763 – 1841) was born in Ireland, completed his medical studies in Europe, and came to America in 1805. In 1807, he delivered a course of lectures on clinical medicine in the recently established College of Physicians and Surgeons. Here in 1808, he received the appointment of professor of midwifery. In 1810, at the reorganization of the school, he became the professor of chemistry, and in 1816 was appointed in addition to the chair of materia medica. MacNeven is affectionately known as "The Father of American Chemistry". MacNeven's best known contribution to science is his "Exposition of the Atomic Theory" (New York, 1820), which was reprinted in the French Annales de Chimie. In 1821 he published with emendations an edition of Brande's "Chemistry" (New York, 1829). JAMES S. STRINGHAM (1775-1817), the earliest professor of medical jurisprudence in America, was born in New York City, where his parents gave him the foremost educational facilities of the time. Some time after taking his degree from Columbia College in 1793, he went to Edinburgh, receiving his medical degree in 1799. Shortly after his return to New York (in 1804) he was appointed professor of chemistry in Columbia College, and delivered a course of lectures on medical jurisprudence, the first in America.

Title: An Essay on Neuralgia

An Essay on Neuralgia