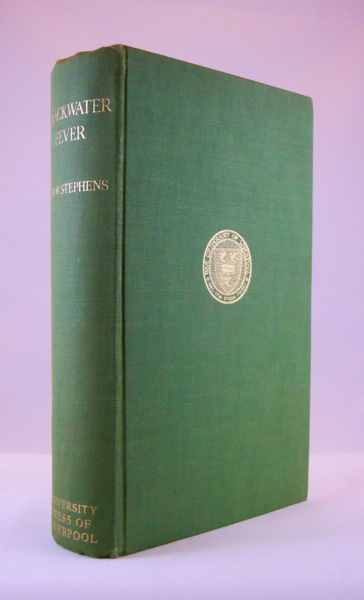 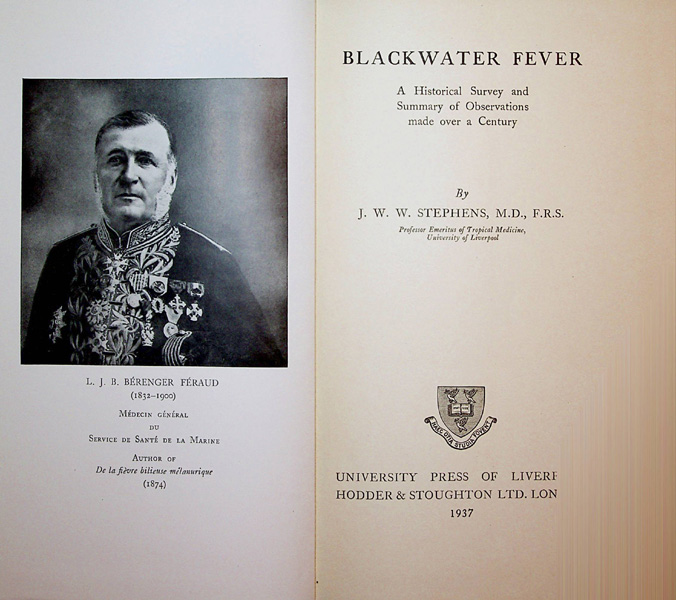 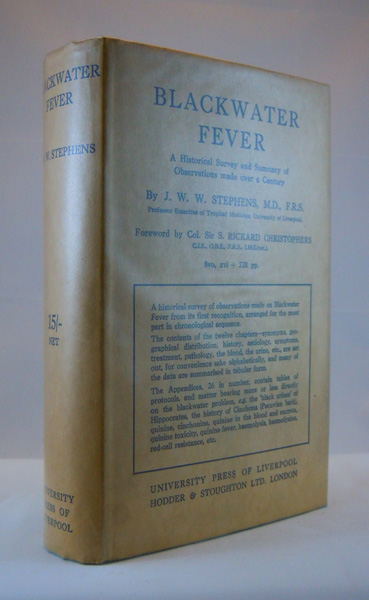 Blackwater Fever. A Historical Survey and Summary of Observations made over a Century

SUPERB HISTORY OF A PUZZLING INTERACTION OF GENES AND ENVIRONMENT: THE BLACKWATER FEVER STORY. 8 3/4 inches hardcover, xvi, 727 pages, green cloth boards, gilt seal of University of Liverpool to cover, gilt title to spine, dust jacket in protective plastic cover. Portrait frontis of L. J. B. Berenger Feraud, Medecin General du Service de Sante de la Marine, many tables throughout. Unmarked, very good. CONTENTS: Geographical distribution; Aetiology: general, malaria, quinine, chinchona; Symptoms; Treatment, prognosis, prophylaxis; The blood; The urine and faeces; Pathology; Hippocrates--case histories; Black urines; Malaria parasites in B.W.F.; Intervals between quinine and hemoglobinuria; Day of death; Cinchona discovery, introduction into Europe, use of the bark in England, controversy; use of the bark in France, controversy; use of the bark in India, China; Quinine discovery and use, hypodermic injections, toxicity, fever and haemolysis, in the organs and excreta; Cinchona fever, discovery; Haemolysis, anti-haemolysin and haemolysin; Resistance of red cells in B.W.F.; Note on haemoglobinurias. GARRISON-MORTON No. 5264.1 C. R. GEORGE: Blackwater fever: the rise and fall of an exotic disease. Journal of Nephrology 22 Supplement 14:120-128, 2009. After several descriptions by Hippocrates and a single possible medieval description by Gilles de Corbeil, a severe febrile illness accompanied by the passage of dark urine burst upon the medical scene in West Africa in 1819, described by an English surgeon named Tidlie. Most of his patients died within a few days. Further reports appeared from tropical regions until the turn of the century, J. Farrell Easmon having given the condition the name blackwater fever in 1884. Controversy raged about its relationship to malaria, as well as over its treatment with cinchona bark and quinine. Evidence evolved that it was a complication of falciparum malaria in which hemoglobinuria causing acute renal failure resulted from massive quinine-induced lysis of red blood cells. People with red cell abnormalities such as glucose-6-phosphate dehydrogenase deficiency proved particularly prone to developing it. Its incidence fell as more mildly acting antimalarial drugs replaced quinine. Several enigmatic issues bedeviled understanding of it, but a careful analysis of its historical development has enabled resolution of each of these.

Title: Blackwater Fever. A Historical Survey and Summary of Observations made over a Century

Blackwater Fever. A Historical Survey and Summary of Observations made over a Century