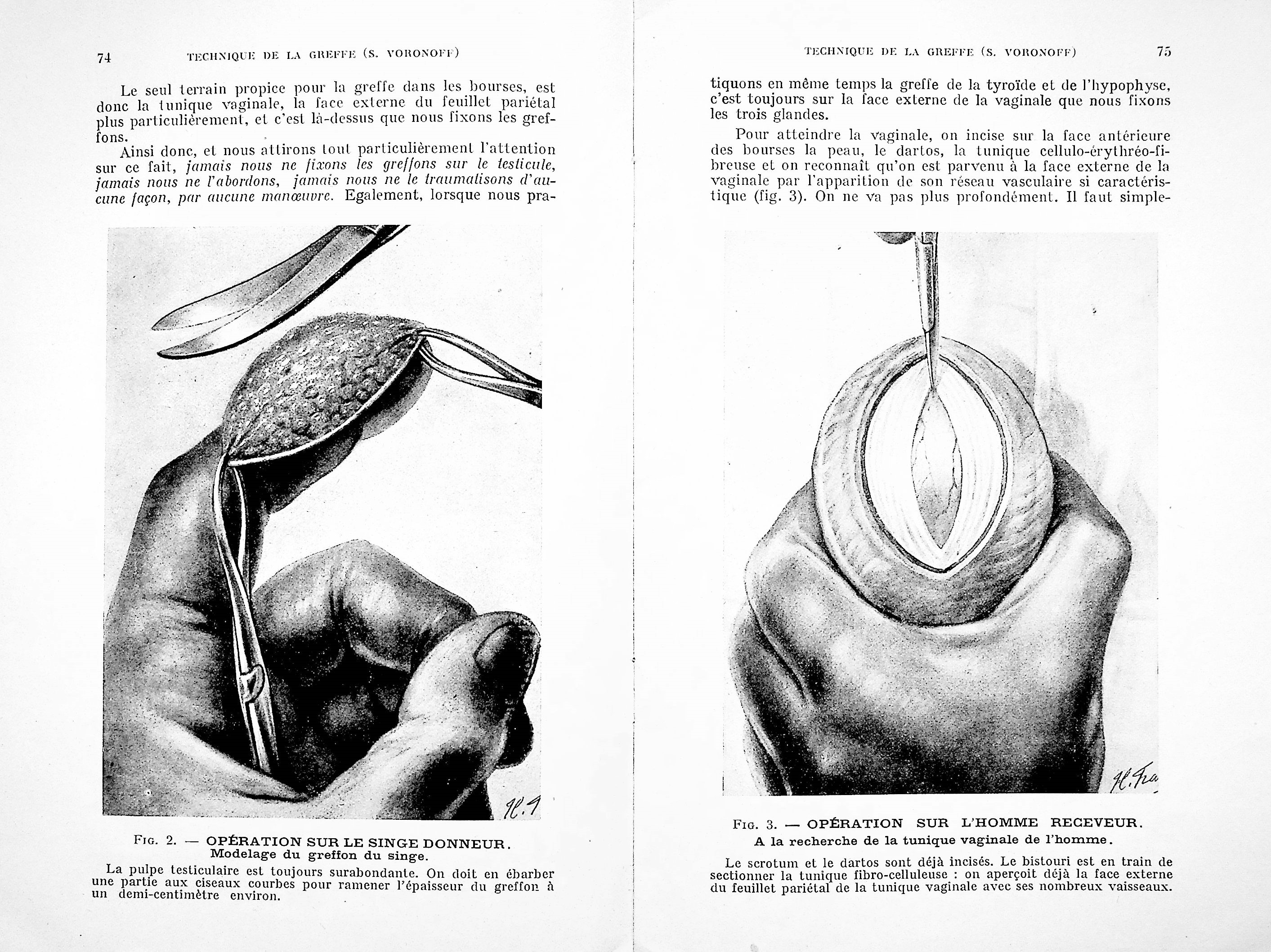 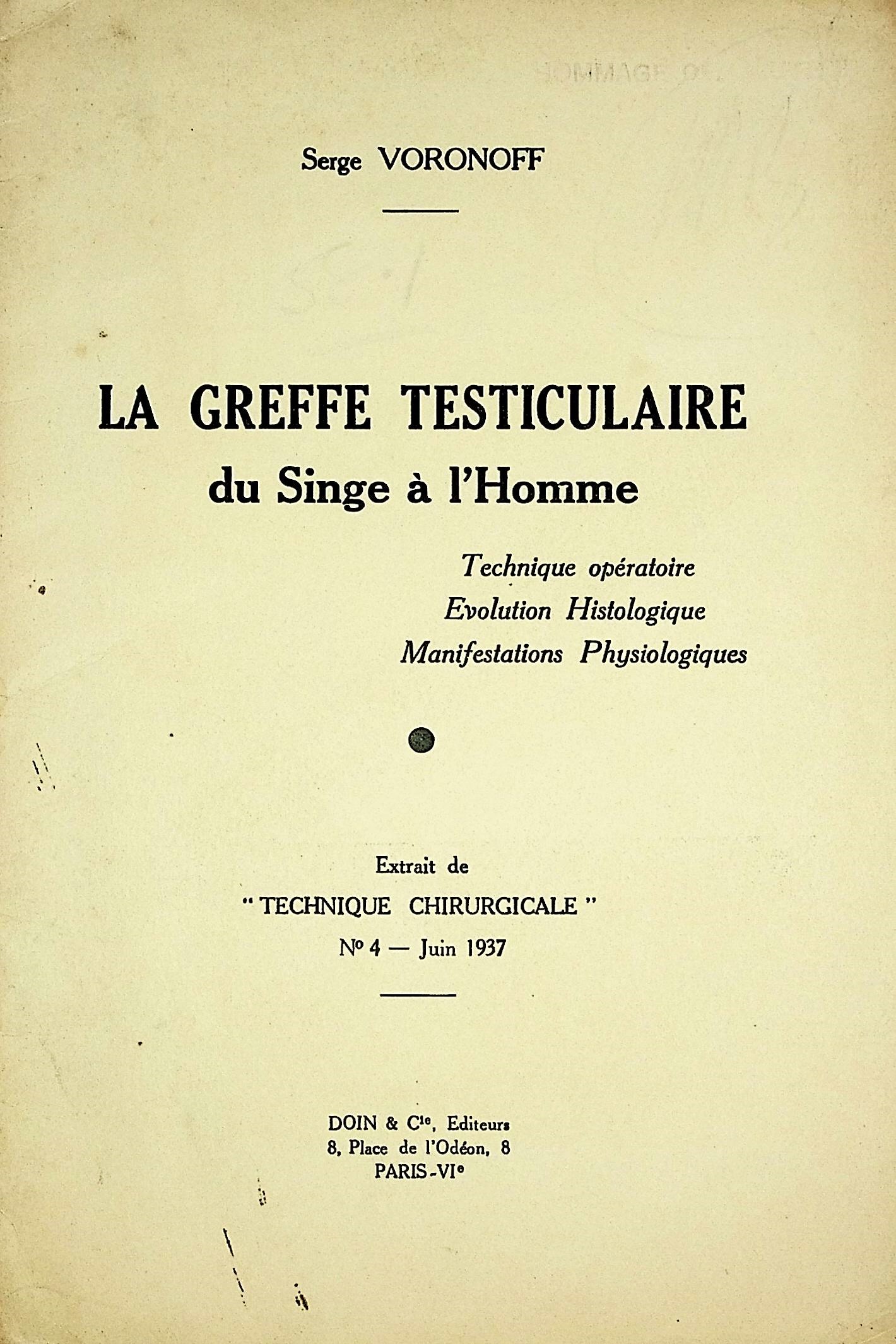 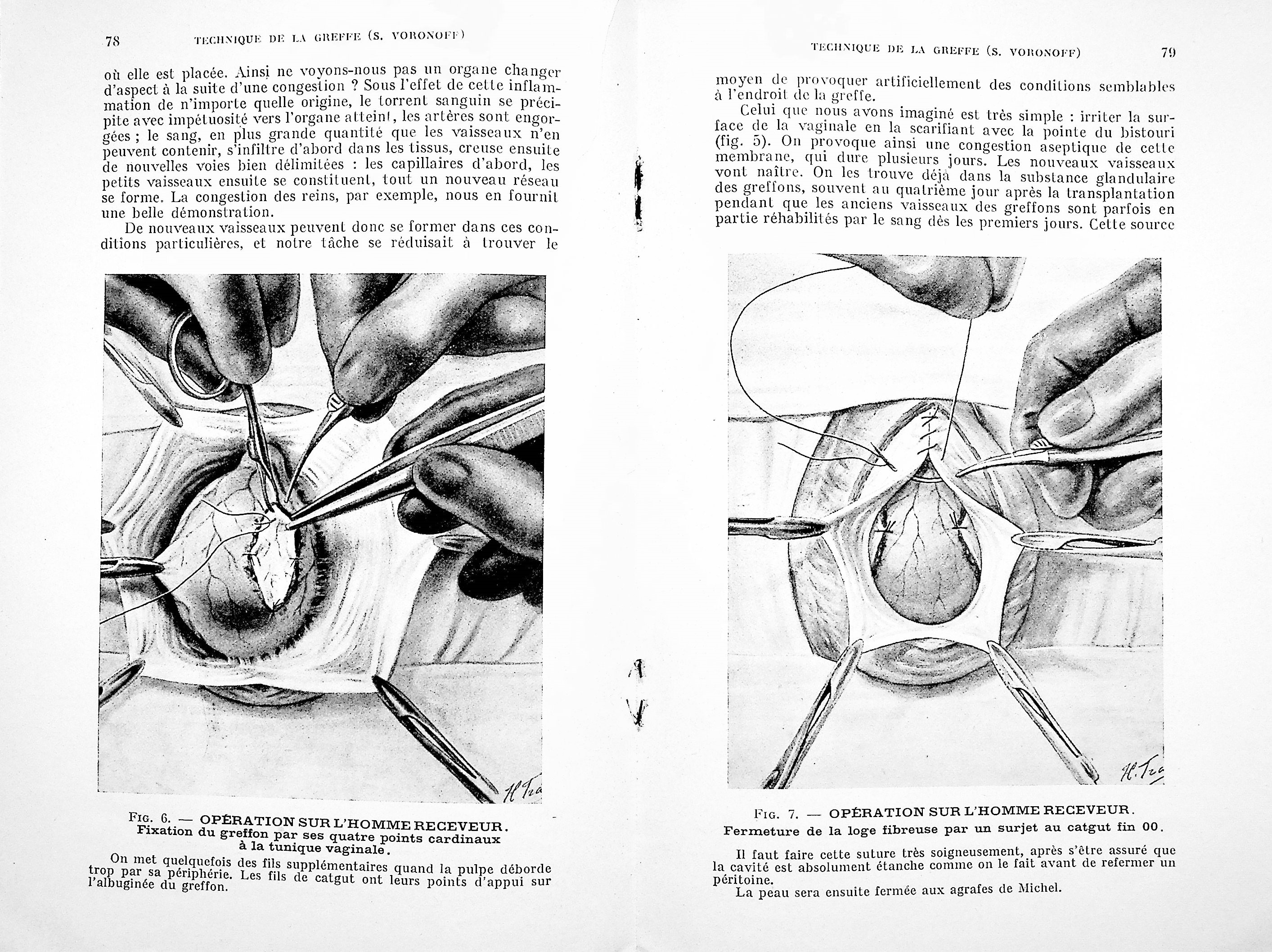 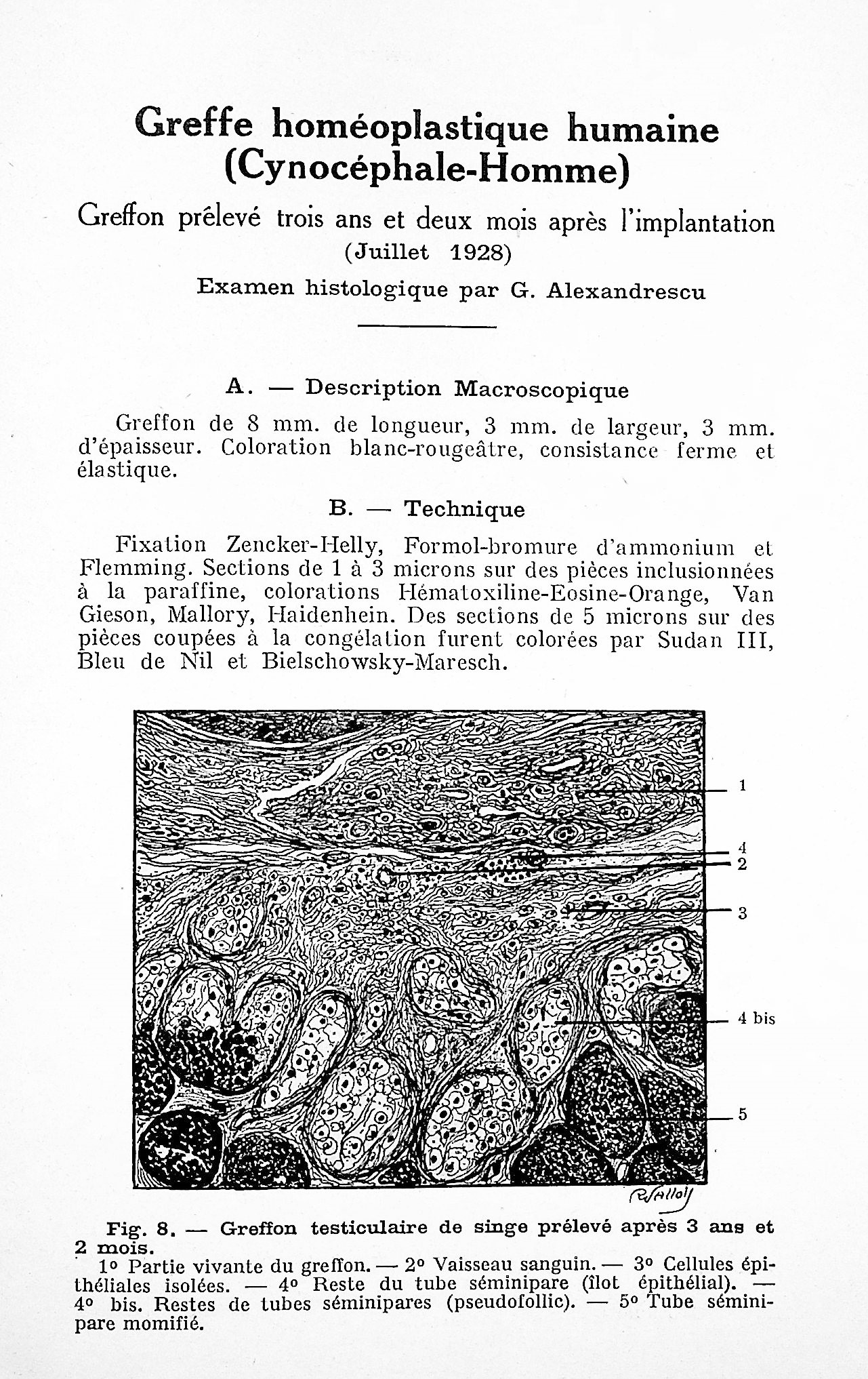 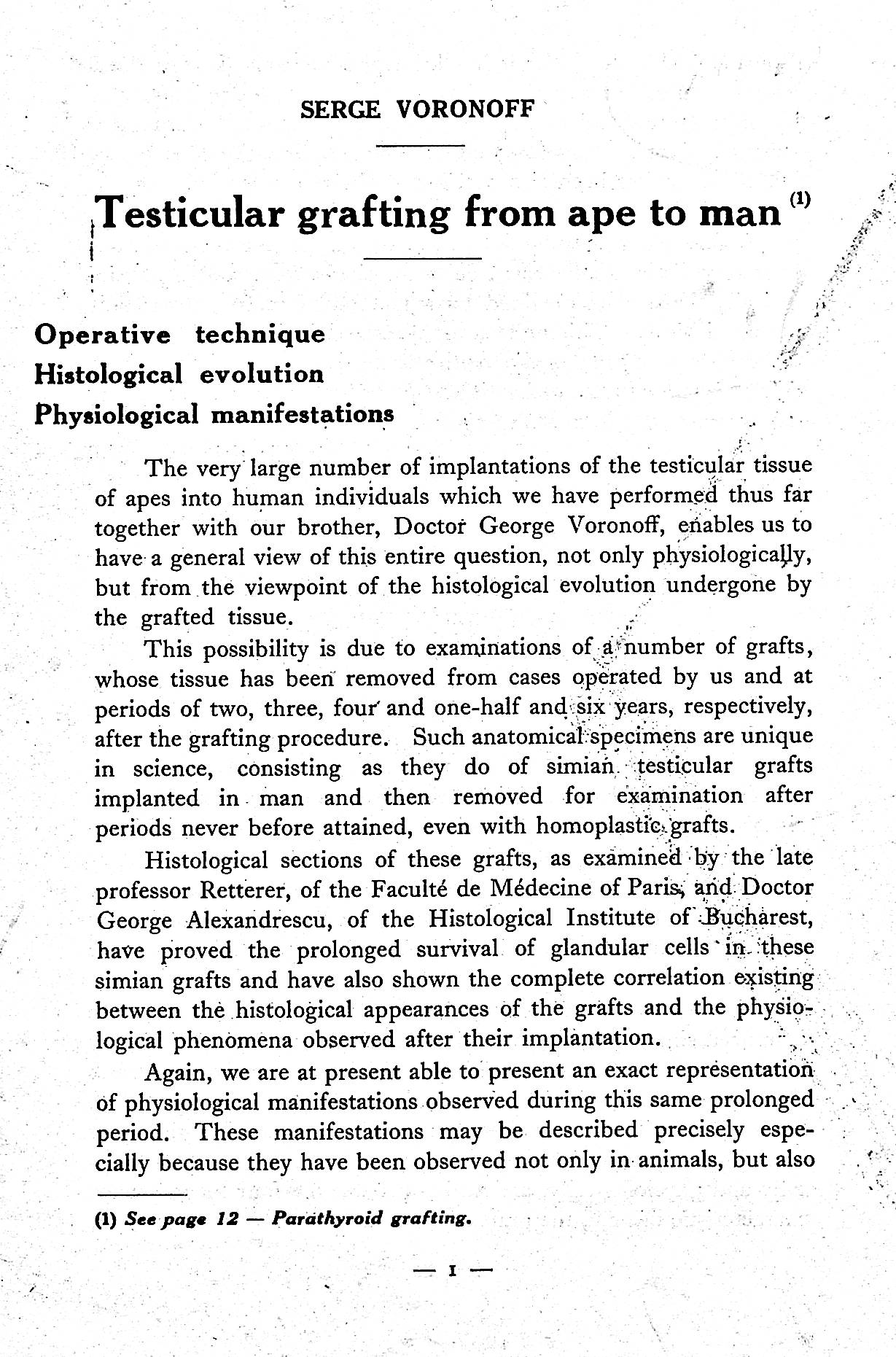 1930s TWO OFFPRINTS, FRENCH AND ENGLISH TRANSLATION, DESCRIBING SURGICAL TRANSPLANTATION OF MONKEY TESTICLES TO HUMANS BY SERGE VORONOFF. 1) 9 1/2 inches tall offprint in paper printed covers, staple binding, paginated 69-88, 12 figures in text [French language]; 2) 9 inches tall offprint, staple binding, 15 pp, no illustrations [English language] (figure legends match French version). Light soiling to covers, unmarked, very good minus. SERGE VORONOFF (1866 - 1951) was a French surgeon of Russian extraction who gained fame for his technique of grafting monkey testicle tissue on to the testicles of men for purportedly therapeutic purposes while working in France in the 1920s and 1930s. His work was ridiculed by the medical establishment. In November 1991, The Lancet, suggested that Voronoff's work be revisited. In particular, since modern medicine has established that the Sertoli cells of the testes constitute a barrier to the immune system, rendering the testes an immunologically privileged site for the transplantation of foreign tissue, the thin slices of monkey testicles Voronoff implanted into the patient's testicles may in theory have survived to produce some benefit. As recently as 2005, Voronoff's work in the 1920s and 1930s was noted for setting the basis for the modern anti-aging strategy of replacing hormones. Such practices are currently advocated by alternative medicine organizations such as the American Academy of Anti-Aging Medicine.