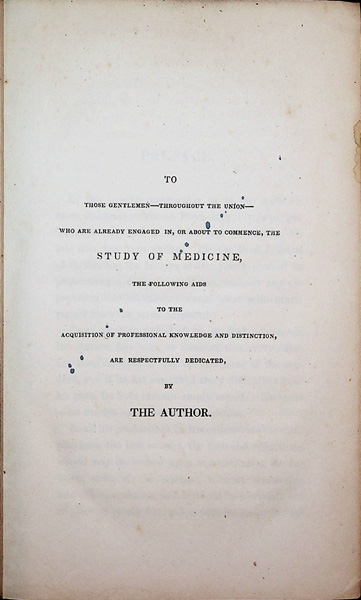 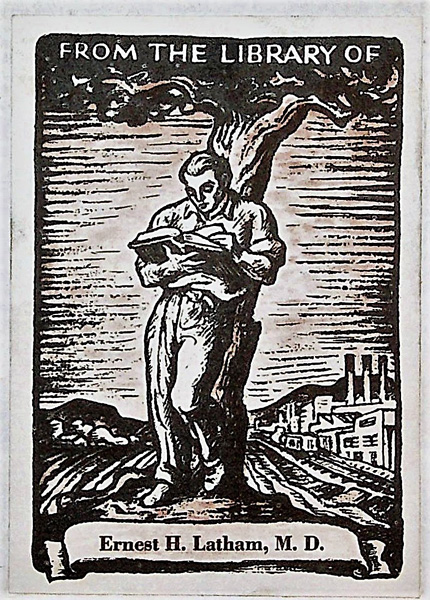 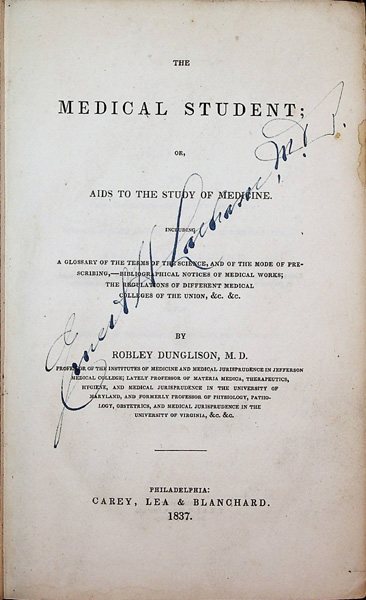 The Medical Student or, Aids to the Study of Medicine

RARE 1837 GUIDE TO MEDICAL STUDENTS BY ROBLEY DUNGLISON, HIRED BY THOMAS JEFFERSON TO UNIVERSITY OF VIRGINIA AS FIRST FULL-TIME MEDICAL FACULTY IN US. 9 inches tall hardcover, xii, 323 pages, original gray cloth binding, worn and discolored with remnants of paper label on spine, bookplate of Ernest H. Latham M.D. on second front endpaper, his signature across title page, text otherwise unmarked and very good (not ex-library). DEDICATION: 'To those gentlemen--throughout the Union--who are already engaged in, or about to commence, the study of medicine, the following aids to the acqusition of professional knowledge and distinction, are respectfully dedicated by the Author.' PREFACE: 'In this humble production, as in the Author's more elaborate works on Physiology, Hygiene, and Therapeutics, and in his Medical Dictionary, his sole aim has been utility. He has been desirous of facilitating the labours of the young student in prosecuting a difficult profession, without any ex- pectation that his labours would meet with much regard from the more advanced.' CONTENTS: Preliminary education; Medical education prior to attendance on lectures; Medical education during the period of attendance on lectures; Medical education after graduation. APPENDIX. BIBLIOGRAPHY, &C. &C. Notices of works on Anatomy, comparative, descriptive, general, pathological, and surgical. Anatomical preparations. Medical bibliography. [ANNOTATED BIBLIOGRAPHY OF 195 WORKS PUBLISHED EARY 1800s]. Chemistry. Clinical instruction. Dictionaries of terms. Medical ethics. History of medicine. Hygjene. Materia medica. Medical jurisprudence. Obstetrics. Pathology and therapeutics. Surgery. Therapeutics. Miscellaneous works, (monographic and polygraphic.) Medical colleges of the United States. [DETAILS OF 23 MEDICAL COLLEGES, WITH A TABLE OF DATES AT WHICH LECTURES COMMENCE AT EACH INSTITUTION. Dunglison had taught at the University of Virginia, University of Maryland, and Jefferson Medical College]. UNIVERSITY OF VIRGINIA. (CHARLOTTESVILLE.) 'When this school was first established, but one medical professor was appointed, to whom every branch of medicine was assigned, except chemistry. The author of this sketch was sole professor from 1825, the year in which the lectures were first delivered, until the session of 1827-8; when, on his proposition, the visitors assigned the departments of practical anatomy and surgery to a demonstrator, and that of materia medica (with his approbation) to the professor of chemistry. Unlike the mass of medical schools, the session of the medical department of the University of Virginia is of the same length as the academic session: ten months.' FROM SAMUEL X. RADBILL, The Autobiographical Ana of Robley Dunglison, M.D. (Trans. Am. Phil. Soc. New Series 53 [8]: 133-134, 1963): Besides the American Medical Library & Intelligencer, the first work I published after I resided in Philadelphia was The Medical Student. The work originated--as I remarked in the preface-in the applications made to me for my opinions as to the best method of study for one about to enter upon professional life, as well as for one engaged in its prosecution. Parts of the work also formed portions of an introductory, and of a valedictory, lecture, delivered to the class in November 1836, and February 1837, copies of which were formally solicited for publication; solicitations which were, however, respectfully declined, as I was desirous, that they might appear in a more useful shape. The whole of the observations applied to Medicine as taught in this country. No speculations were entered into, as to what medical education ought to be. The work was intended simply as some guide to the American medical student, 'who too frequently is totally uninformed as to the course he ought to pursue-not only when he commences to read upon his profession, but when he enters a medical college for the prosecution of his studies there.' A bibliography was appended, in which a short notice was taken of several of the books in the English language indigenous and imported, which are placed before the student in the ordinary bookstores or which he sees, from time to time, advertised in the catalogues. This department contained a notice of one hundred and ninety five different works; and the volume terminated with an account of the Medical Colleges of the United States; their history and existing conditions, which was reprinted with modifications, from an article furnished by me, at the request of Dr. Forbes, to the British & Foreign Medical Review, and of which I have before spoken (p. 77). In the year 1844, the first edition of 1000 copies was exhausted.' ROBLEY DUNGLISON (1798 - 1869) was an English physician who moved to America to join the first faculty of the University of Virginia. He was personal physician to Thomas Jefferson and considered the 'Father of American Physiology'. Robley Dunglison was born in Keswick, Cumbria, England. He studied medicine in London, Edinburgh, and Paris. He obtained his M. D. from the University of Erlangen, Germany, in 1823. In 1824, Thomas Jefferson and the Board of Visitors of the University of Virginia commissioned Francis Walker Gilmer to find professors in England for his new University. Gilmer offered the anatomy and medicine professorship to Dunglison. While at UVA, Dunglison published his landmark text Human Physiology (1832), which established his reputation as the 'Father of American Physiology.' In 1832, Dunglison moved to the University of Maryland. Three years later Dunglison became Chair of the Institutes of Medicine and Medical Jurisprudence at the Jefferson Medical College (JMC) in Philadelphia, where he spent the rest of his career. ERNEST H. LATHAM was a surgeon at Lowell General Hospital, Lowell, MA in the mid-20th century.

Title: The Medical Student or, Aids to the Study of Medicine

The Medical Student or, Aids to the Study of Medicine