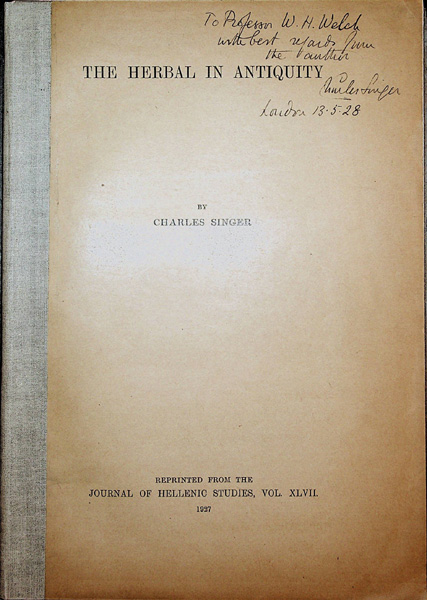 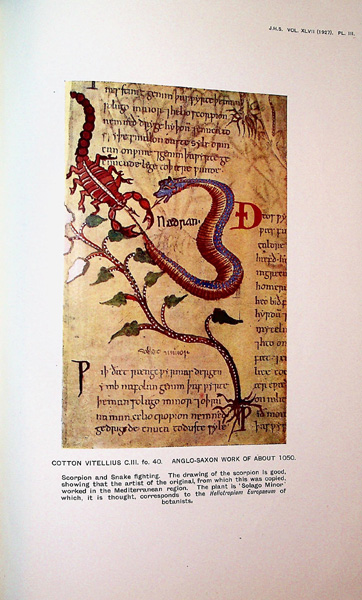 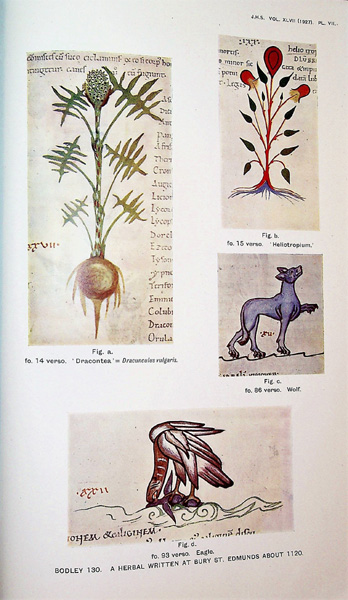 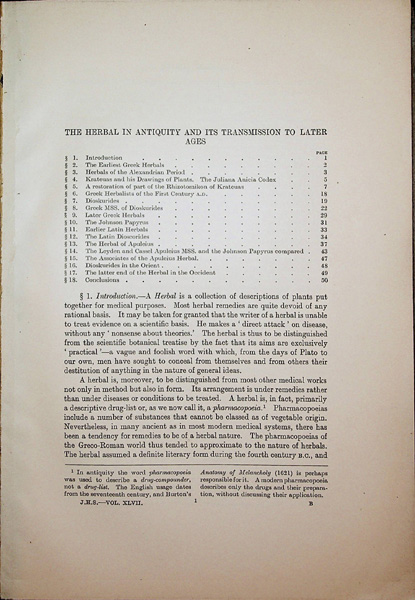 The Herbal in Antiquity and Its Transmission to Later Ages

1927 IMPORTANT ILLUSTRATED PAPER BY NOTED MEDICAL HISTORIAN CHARLES SINGER INSCRIBED TO WILLIAM H. WELCH, 'DEAN OF AMERICAN MEDICINE'. 11 inches tall offprint from the Journal of Hellenic Studies, bound with cloth in charcoal card covers with typed paper label on cover, and green cloth spine. INSCRIBED 'To Professor W. H. Welch, with best regards from the author, Charles Singer, London 13.5.28'. 52 pages, 46 black & white figures in text and full-page; 10 color plates. Covers age-toned, corners of card binding worn, offprint very good. THE JOURNAL OF HELLENIC STUDIES (JHS) is recognised internationally as one of the foremost periodicals in the field of classical scholarship. It contains articles on a wide variety of Hellenic topics including Greek language, literature, history and art and archaeology in the Ancient, Byzantine and Modern periods, as well as reviews of recent books of importance to Greek studies. GARRISON-MORTON No. 2053. CHARLES SINGER (1876-I960) After some early education at Notting Hill Singer entered the City of London School when he was almost twelve. When he was thirteen Singer was well embarked on Latin and Greek, and he also did some science, which was mainly chemistry. But he was not to win renown as an orthodox Greek scholar at a university; for when he was still under sixteen his form master discovered his interest in Darwin and in dissection, and his father was advised to take him away from school. Singer left in the summer of I892. It was decided that he should study medicine at University College, London, and he therefore spent a year at a tutorial college cramming for his 'Matric'. In September I893 h estarted First Medical at University College, did very well in zoology, and after a year decided to take his B.Sc. with special reference to zoology. Singer went up to Oxford in January I896, and he began to read animal morphology, which was professed by Ray Lankester. In October 1898 he became a medical student at St. Mary's Hospital, Paddington, In the autumn of I903 Singer passed the examination for the Conjoint qualification. Singer was an original member of the History of Medicine Section of the Royal Society of Medicine. He came much in contact with Osler, whom he had first met when he took his Oxford M.B. in 1905, and in 19I4 the latter asked Singer to accept a studentship in pathology at Oxford, the duties ofwhich were to be mainly historical. Singer was commisioned early in the war as a pathologist. On his demobilization after the end of the war he returned to Oxford, where he was then appointed lecturer in the history of biology, after which he accepted in I920 the offer of a lectureship in the history of medicine at University College, London. By this time Singer was already widely known as a notable historian of medicine. He had become a Fellow ofthe Royal College of Physicians in 1917; and in 1923 and I924 he delivered on that subject the FitzPatrick Lectures at the College. These lectures were published in an extended form in 1925 with the title The Evolution ofAnatomy. In I923 Singer had published a short account of early herbals, and in 1927 he published his very important paper on 'The Herbal in Antiquity'; this study has not yet been superseded. WILLIAM HENRY WELCH (1850 - 1934) was an American physician, pathologist, bacteriologist, and medical school administrator. He was one of the 'Big Four' founding professors at the Johns Hopkins Hospital. He was the first dean of the Johns Hopkins School of Medicine and was also the founder of the Johns Hopkins School of Hygiene and Public Health, the first school of public health in the country. The Johns Hopkins medical school library is also named after Welch. In his lifetime he was called 'the Dean of American Medicine' and received various awards and honors throughout his lifetime, and posthumously.

Title: The Herbal in Antiquity and Its Transmission to Later Ages

The Herbal in Antiquity and Its Transmission to Later Ages