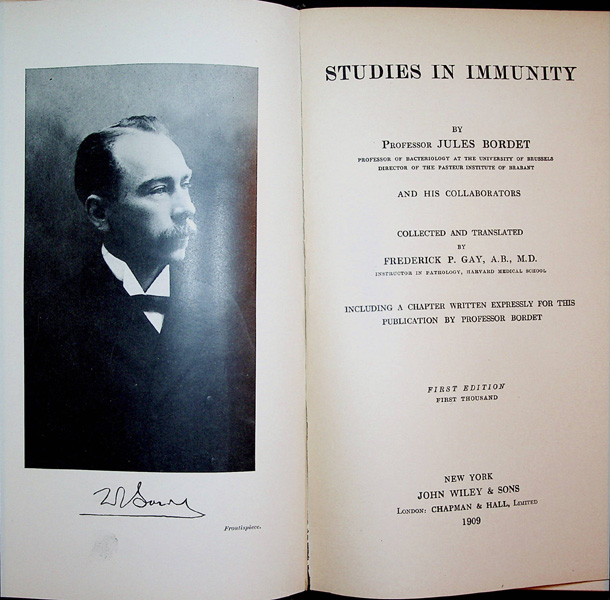 Studies in Immunity by Professor Jules Bordet and his Collaborators

1909 SCARCE ENGLISH TRANSLATIONS OF NOBEL-WINNING PAPERS BY JULES BORDET, DISCOVERER OF WHOOPING COUGH. 9 inches tall hardcover, vii, 545 pages, orginal black cloth binding, gilt title to spine, frontis portrait of Bordet. Bottom of spine frayed, otherwise very good. PREFACE by editor Frederick P. Gay: 'Although for more than fifteen years a protagonist in the modern development of Immunity, Bordet has continued an investigator instead of becoming a generalizer; he has been led by thoroughness of observation and brilliancy of inductive reason to the collection of successive significant facts rather than to the assimilation of scattered data in support of a preconceived theory. ... I am indebted to Professor Bordet, not only for consenting to the collection of these articles, but also for furnishing the concluding chapter and for certain suggestions and corrections. Doctor Gengou was so kind as to abstract one of his articles for this publication. Thanks are also due to the publishers of the various journals in which these articles appeared for permission to translate or to reprint them. Boston, August, 1909.' Two of the translations in this collection are cited in GARRISON-MORTON (Nos. 2551 and 2552). JULES JEAN BAPTISTE VINCENT BORDET (13 June 1870 - 6 April 1961) was a Belgian immunologist and microbiologist. He graduated as Doctor of Medicine from the Free University of Brussels in 1892 and began his work at the Pasteur Institute in Paris in 1894, in the laboratory of Elie Metchnikoff, who had just discovered phagocytosis of bacteria by white blood cells, expression of the cellular immunity. In 1900, he left Paris to found the Pasteur Institute in Brussels, and made his discovery that the bacteriolytic effect of acquired specific antibody is significantly enhanced in vivo by the presence of innate serum components now known as complement. This mechanism became the basis for complement-fixation testing methods that enabled the development of serological tests for syphilis. With Octave Gengou, he isolated Bordetella pertussis in pure culture in 1906 and posited it as the cause of whooping cough. The Nobel Prize in Physiology or Medicine was awarded to him in 1919 for his discoveries relating to immunity.

Title: Studies in Immunity by Professor Jules Bordet and his Collaborators

Studies in Immunity by Professor Jules Bordet and his Collaborators