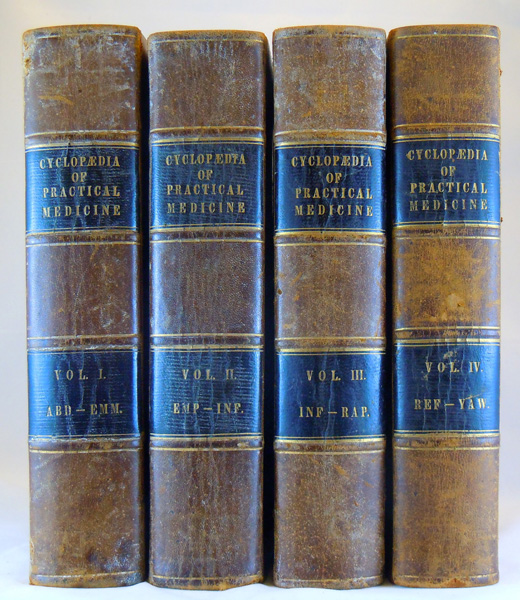 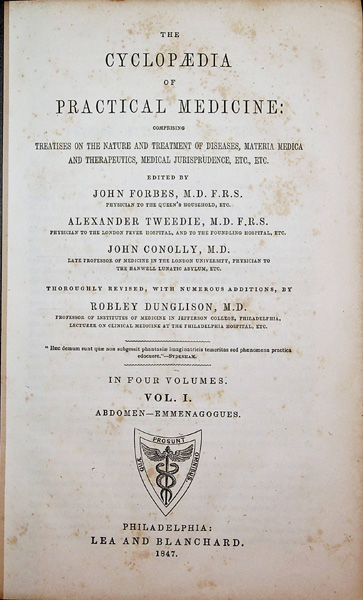 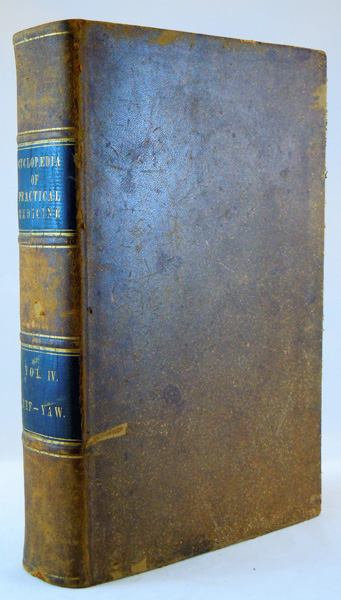 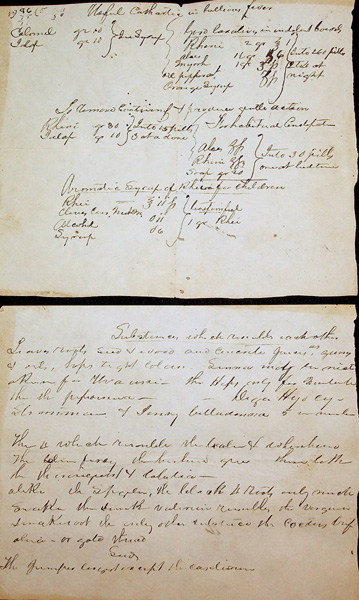 The Cyclopaedia of Practical Medicine; comprising treatises on the nature and treatment of diseases, materia medica and therapeutics, medical jurisprudence, etc., etc.

1847 FIRST EDITION MASSIVE MID-19TH CENTURY REFERENCE WORK EDITED BY THOMAS JEFFERSON'S PERSONAL PHYSICIAN. Four 10 inches tall hardcover volumes bound in original full sheepskin, spines with raised bands and gilt black leather labels. Several wood engravings in text, 788, 804, 782, 770 pages. Covers rubbed but bindings strong and tight, light scattered foxing throughout, text unmarked except pencil calculations on front endpapers of vol. 4. Two 6 x 7 1/2 inch contemporary folded ink handwritten prescriptions laid in vol. 1. PREFACE OF THE AMERICAN EDITOR. 'The general voice of the profession everywhere has, indeed, sufficiently shown, that the hope expressed by the British editors, in their Preface, has been amply realized. It is admitted, that they have prepared a work required by the present wants of medical readers, acceptable to the profession in general, and in all respects 'a standard work on the Practice op Medicine.' It was for this reason, and owing to the high opinion expressed of its merits by those on this side of the Atlantic, who had the good fortune to consult its pages, and to the anxiety of the best informed that it should be rendered more available to the profession in this country, that the publishers determined, at a great outlay of money and of labour, to reprint it. ... In all cases, however, the undersigned has endeavoured to add the facts and opinions, which form part of the medicine of the day, and to omit nothing calculated, in his view, to throw additional light on the subjects canvassed. The interstitial additions enclosed in brackets [ ]. Besides these, he has inserted different topics, which had been wholly omitted in the English edition, some of which essentially American in their character. To these additions his signature is appended. For one article, on the History of American Medicine before the Revolution, he is indebted to Dr. J. B. Beck, of New York. On every occasion he has been anxious to cite the views and observations of cotemporary, and particularly of American, writers, where such views and observations appeared to him to merit especial notice.' Dunglison catalogued his original entries to Cyclopaedia of Practical Medicine in Radbill. The Autobiographical Ana of Robley Dunglison, M.D., Trans. Am. Philo. Soc. 53 (8) December 1963: 'Besides the interstitial additions, the following articles (with Dr. Marshall Hall); Anthracein; Aphthae (with Dr. A. Robertson) ; Asphyxia of the Newborn; Blood, Dr. A. Robertson) ; Asphyxia of the Newborn; Blood, (diseases of the) ; Bronchitis, summer; Cachexia; (ªdiseases of the) ; Bronchitis, summer; Cachexia; Cholera infantum; Cirrhosis of the lung; Colon, torpor of the; Croup of the adult; Delirium tremens; Dengue; Diarrhoea, adipous; Disinfectant; Enteritis (with Dr. Stokes) ; Eutrophie; Fever, Malignant remittent; Gal- vanism (with Dr. Apjohn) ; Glanders; Heart, Polypus of the; Intussusception; Jaundice of the Infant, Laryngitis, chronic; Milk sickness; Mind, soundness and unsoundness (with Dr. Prichard) ; Molluscum; Nauseants; Ophthalmia (with Dr. J&cob) , Palpitation (with Dr. Hope) ; 3 Parturients; Ptyalism; Rheumatism (with Dr. Barlow) ; Sedatives (with Dr. A. T. Thomson) ; Sperma- Statistics, medical (with Dr. Bisset Hawkins) ; Stoma- Statistics, medical (with Dr. Bisset Hawkins) ; Stoma titis; Strophulus; Throat, diseases of the (with Dr. Tweedie) ; Toothache; Toxicology (with Dr. Apjohn).' ROBLEY DUNGLISON (1798 - 1869) was an English physician who moved to America to join the first faculty of the University of Virginia. He was personal physician to Thomas Jefferson and considered the 'Father of American Physiology'. Robley Dunglison was born in Keswick, Cumbria, England. He studied medicine in London, Edinburgh, and Paris. He obtained his M. D. from the University of Erlangen, Germany, in 1823. In 1824, Thomas Jefferson and the Board of Visitors of the University of Virginia commissioned Francis Walker Gilmer to find professors in England for his new University. Gilmer offered the anatomy and medicine professorship to Dunglison. While at UVA, Dunglison published his landmark text Human Physiology (1832), which established his reputation as the 'Father of American Physiology.' In 1832, Dunglison moved to the University of Maryland. Three years later Dunglison became Chair of the Institutes of Medicine and Medical Jurisprudence at the Jefferson Medical College (JMC) in Philadelphia, where he spent the rest of his career. HEAVY ITEM--INQUIRE FOR SHIPPING COSTS.

Title: The Cyclopaedia of Practical Medicine; comprising treatises on the nature and treatment of diseases, materia medica and therapeutics, medical jurisprudence, etc., etc.

The Cyclopaedia of Practical Medicine; comprising treatises on the nature and treatment of diseases, materia medica and therapeutics, medical jurisprudence, etc., etc.