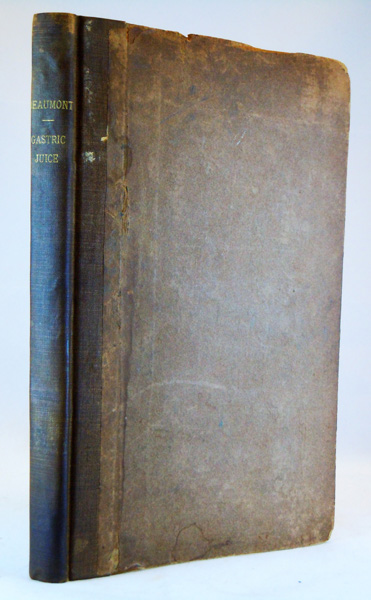 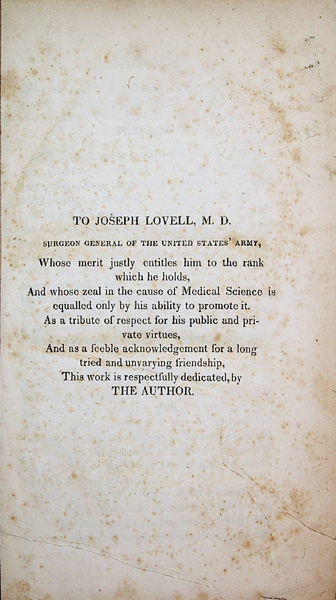 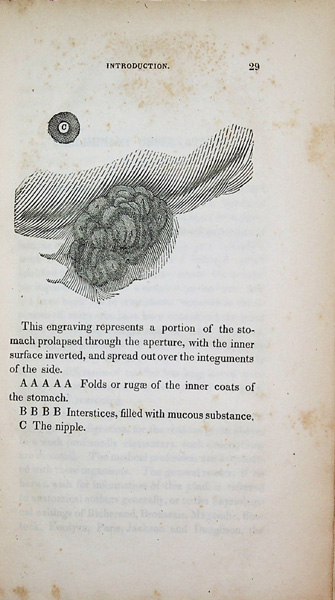 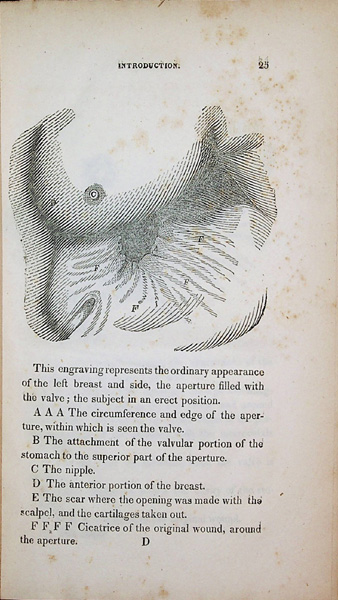 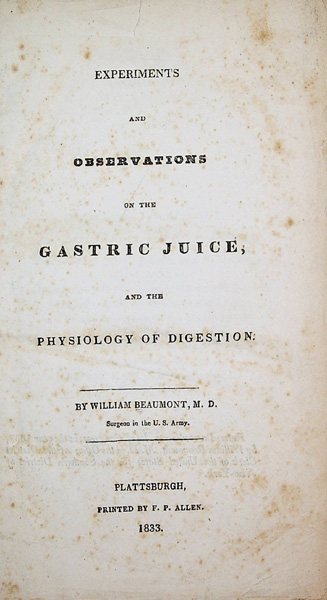 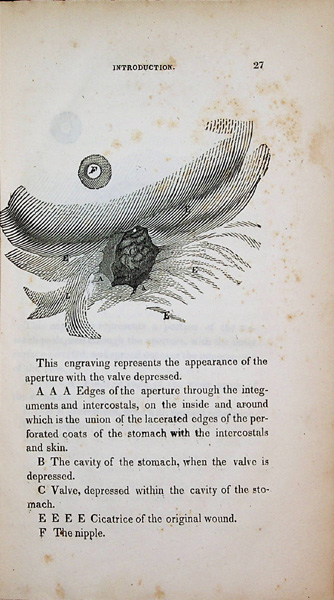 Experiments and Observations on the Gastric Juice, and the Physiology of Digestion

1833 BEAUMONT'S OBSERVATIONS ON THE GASTRIC JUICE--FIRST EDITION OF RARE EARLY AMERICAN MEDICAL CLASSIC. 9 inches tall hardcover, original brown paper covered boards, more recent brown linen spine with gilt title, new endpapers, pencilled notes on front and back endpapers. 280 pp, 3 wood engravings in text, scattered light foxing, text unmarked, very good. In custom archival mylar cover. WILLIAM BEAUMONT (1785-1853) was a surgeon in the U.S. Army, and was the first to study the digestive system of a living person. His patient, a Canadian half-breed who had received a near-mortal gunshot wound in the abdomen and chest, recuperated over a period of many months, sustaining a permanent fistula in the stomach wall through which Beaumont was able to study the process of digestion. Beaumont began his observations in 1825 and continued them for nearly eight years, over which time his patient fully recovered.Beaumont commissioned a printing of about 1,000 copies of this book, from a local Plattsburgh, NY, printer, and the quality of the printer's work was not very high, accounting for its rarity. GARRISON-MORTON No. 989: 'Alexis St. Martin, a Canadian half-breed who had sustained a gastric fistula, was treated and investigated by Beaumont. With his human medium, Beaumont as the first to study digestion and the movements of the stomach in vivo. His work on the subject was the most important before Pavlov.' GROLIER 100 INFLUENTIAL AMERICAN BOOKS PRINTED BEFORE 1900: No. 38: 'On June 6, 1822, Alexis St. Martin, a hardy, robust and healthy French Canadian of 19, received an accidental, extensive gunshot wound in the abdomen. Two ribs were smashed into the stomach making a horrid perforated gash so that Beaumont, a doctor of 37 in Plattsburg, N. Y., who was called to attend him, did not think he 570uld live 20 minutes. Not so that husky physical specimen. At first Beaumont held the stomach together with tapes, but eventually he constructed a flap of stomach tissue to cover the wound, which could be raised for observation, so that for the first time in medical history he processes of human digestion could be visually seen. St. Martin had no earning capacity, loved alcohol to toxicity, and hated restraint, so Beaumont had to take him home to continue his observations. St. Martin couldn't stand it, and ran away in 1825, but Beaumont found him in Canada in 1828, brought him back, and went on with his studies ot digestion, the work being done in Washington with the assistance of the Surgeon-general. St. Martin vanshed again in 1834, and was never found in Beaumont's lifetime; he outlived Beaumont 20 years, married and had children, and when he died his family refused an autopsy and buried him 8 feet deep so that he could not be dug up again. Beaumont's record of his observations of St. Martin's stomach in :his work, which was immediately published also in England and translated into German, is the greatest contribution ever made to the knowledge of gastric digestion. His study of the physical and chemical properties of the gastric juice was so complete and accurate that, except for the isolation of pepsin (which he suspected), modern research has added but little to his findings. 'Every physician who prescribes for digestive disorders and every patient who is benefitted by such a prescription owes gratitude to the memory of William Beaumont for the benefit of mankind.' There had been ten or a dozen other recorded cases of gastric fistula, but this time the opportunity met the right man, in this then obscure physician in backwoods New York.' GROLIER 100 BOOKS FAMOUS IN MEDICINE: No. 71: 'William Beaumont's immortality is assured by what Sir William Osler called a 'brown backed, poorly printed octavo volume of 280 pages with the imprint 'Plattsburgh, printed by F. P. Allen 1833'.' The first edition, which included three wood-engraved illustrations of St. Martins wound and stomach after drawings by a Mr. King, was originally offered for sale at three dollars a copy. Later, Senator Edward Everett, a cousin of Beaumont, observed that '... if the price were lower' the book would have had a larger sale. It was printed in Plattsburgh, where Beaumont had previously practiced medicine, because the work could be done more quickly and cheaply there than in New York or Philadelphia and because Beaumont did not find New York a congenial place to work.'

Title: Experiments and Observations on the Gastric Juice, and the Physiology of Digestion

Experiments and Observations on the Gastric Juice, and the Physiology of Digestion