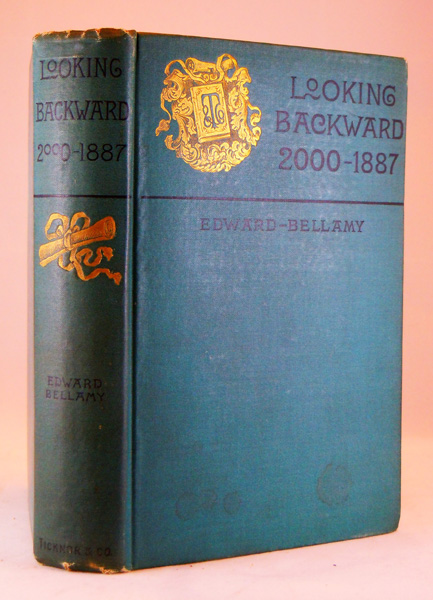 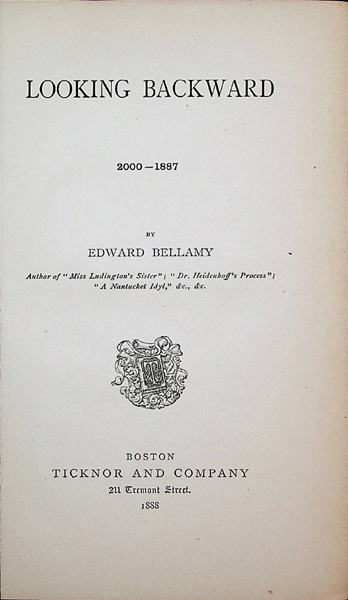 1888 VERY SCARCE FIRST PRINTING OF LANDMARK UTOPIAN AMERICAN NOVEL. 7 1/2 inches tall hardcover, vi, 470 pages, in original slate green binding with gilt publisher's emblem to cover. Copyright page with 'Press of J. J. Arakelyan', and misprint ('wore' rather than 'were', line 8, page 210). Wear to rear cover, corners and spine ends worn, hinges starting, overall very good. EDWARD BELLAMY (March 26, 1850 - May 22, 1898) was an American author and socialist, most famous for his utopian novel, Looking Backward, a tale set in the distant future of the year 2000. Although Bellamy retrospectively claimed he did not write Looking Backward as a blueprint for political action, but rather sought to write 'a literary fantasy, a fairy tale of social felicity', the book inspired legions of inspired readers to establish so-called Nationalist Clubs, beginning in Boston late in 1888. Bellamy's vision of a country relieved of its social ills through abandonment of the principle of competition and establishment of state ownership of industry proved an appealing panacea to a generation of intellectuals alienated from the dark side of Gilded Age America. By 1891 it was reported that no fewer than 162 Nationalist Clubs were in existence. Bellamy's use of the term 'Nationalism' rather than 'socialism' as a descriptor of his governmental vision was calculated, as he did not want to limit either sales of his novel or the potential influence of its political ideas. Bellamy himself came to actively participate in the political movement which emerged around his book, particularly after 1891 when he founded his own magazine, The New Nation, and began to promote united action between the various Nationalist Clubs and the emerging People's Party. For the next three and a half years, Bellamy gave his all to politics, publishing his magazine, working to influence the platform of the People's Party, and publicizing the Nationalist movement in the popular press. This phase of Bellamy's life came to an end in 1894, when The New Nation was forced to suspend publication owing to financial difficulties. LOOKING BACKWARD is No. 90 in Grolier One Hundred Influential American Books Printed Before 1900 (1947): 'First edition, original light green cloth; first state of the sheets, with printer's imprint on the copyright page. Copies in wrappers were issued later in 1888. This is the most famous American Utopian romance. Bellamy's arguments for a socialist state, devoid of production for private profit, concentrations of wealth, and social inequalities, were presented so convincingly as reforms already accomplished that they easily roused the imagination of people ready for a new deals. The book inspired the Nationalist movement, which sought government ownership of productive and distributive facilities, to be brought about by ballots, not revolution. The social philosophy of Edward Bellamy, which he set forth in Looking Backward, 1888, was not new and immediately had many imitators, yet it somehow seized the imagination, and sold some million copies in the brief span of a year. He set forth a philosophy of economic organization that would give the people, in his words, 'equality corresponding to and supplementing their political equality.' Such Utopian socialism had its roots among a people who had been frequently given to Utopian ventures, and its influence on various populist groups has continued, and has been most evident recently on proletarian movements.'