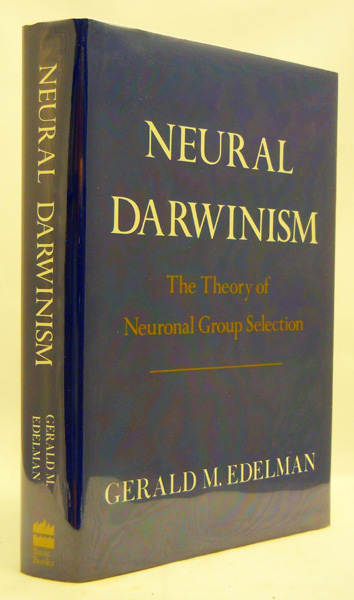 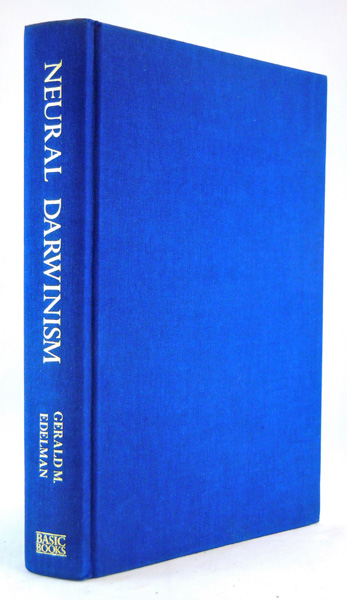 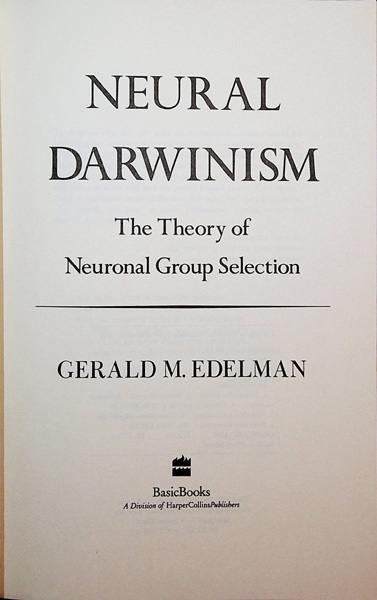 1984 FIRST EDITION OF NOBEL LAUREATE'S APPLICATION OF DARWININAN SELECTION TO BRAIN FUNCTION. 9 1/2 inches tall hardcover, xxii, 371 pages, blue cloth binding, gilt title to spine, many illustrations, folding color plate. Fine/vg (dj in protective mylar sleeve). Edelman's central idea is that the nervous system in each individual operates as a selective system resembling natural selection in evolution, but operating by different mechanisms. Memory is considered a dynamic process of recategorization rather than a replicative store of attributes. The book focuses on key problems in developmental and evolutionary biology, anatomy, physiology, ethology, and psychology. Cited by P Alberch in The Logic of Monsters 1989.OBITUARY published in Nature 510:474, June 2014: 'Edelman was fascinated throughout his career by the enormous explanatory potential of selective-recognition systems. These had already been used to attack and elucidate two of the most challenging problems in biology: the evolution of species and the adaptive immune response. Darwinian evolution of species depends on fitness-based selection from a repertoire of variable genetic studies, two fundamental properties of neurons and their synaptic connections were discovered by different teams: that cortical neurons are organized into discrete groups of cells, and that synapses strengthen through use. Edelman reasoned that the formidable recognition and processing capabilities of a complex nervous system depend on selection operating on cell groups that differ in their connectivity patterns. Incoming sensory information would elicit a response from distinct cell groups; it could be modified, he posited, by repetitive recognition (termed re-entry) that provided opportunities for strengthening, abstraction and association. Thus, he argued, the simplicity of repeated selection from an evolving repertoire could account for the astonishing information-processing power of sophisticated neural systems.