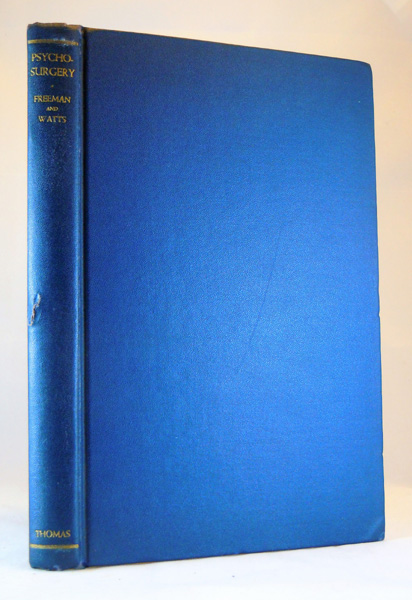 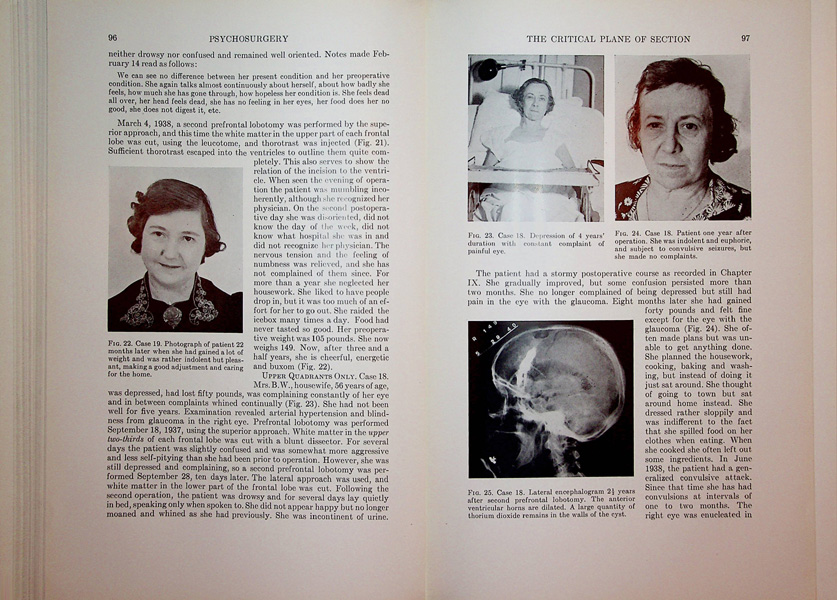 RARE FIRST EDITION OF 'PSYCHOSURGERY' BY PHYSICIAN WHO SUBJECTED THOUSANDS OF AMERICANS TO FRONTAL LOBOTOMY. 10 1/4 inches tall hardcover, blue cloth binding, dedication 'To Egas Moniz who first conceived and executed a valid operation for mental disorder.' 81 figures, many of which are photographs of patients. 1/2 inch closed tear to rear edge of spine, corners and edges slightly bumped, no external or internal markings, gilt title to spine bright, binding tight, pages clean and crisp, very good. cf GARRISON-MORTON No. 4906 Prefrontal lobotomy in agitated depression. Report of a case. Med. Ann. Distr. Columbia 5, 326-28 , 1936; Psychosurgery: Intelligence, emotion, and social behavior following prefrontal lobotomy for mental disorders. Springfield: Charles C Thomas, 1942. Cited in THE MEDICAL BOOK: 250 MILESTONES IN THE HISTORY OF MEDICINE (Pickover, 2012): 'Portuguese neurologist Egas Moniz received the Nobel Prize for some of the early work in leukotomies, and in 1936 American neurosurgeon James Watts and physician Walter Freeman performed the first prefrontal leucotomy in the United States. Medical historian Ole Enersen writes that Freeman performed lobotomies 'with a recklessness bordering on lunacy, touring the country like a travelling evangelist. Between 1948 and 1957, he alone lobotomized 2,400 pafients. In the 1940s and 1950s, about 40,000 people in the United States were lobotomized. The use of lobotomies diminished after the invention of antipsychotic drugs such as chlorpromazine. WALTER JACKSON FREEMAN II, M.D. (1895 - 1972) was an American physician who specialized in lobotomy. Freeman attended Yale University, which at the time was Yale College, beginning in 1912 and graduated with his undergraduate degree in 1916.[3] He then moved on to study neurology at the University of Pennsylvania Medical School. In 1924, Freeman relocated to Washington D.C. and started practicing as the first neurologist in the city. Freeman earned his PhD in neuropathology within the following few years and secured a position at George Washington University in Washington, D.C. as head of the neurology department. On November 12, 1935, a new psychosurgery procedure was performed in Portugal under the direction of the neurologist and physician Egas Moniz. His new 'leucotomy' procedure, intended to treat mental illness, took small corings of the patient's frontal lobes. Moniz became a mentor and idol for Freeman who modified the procedure renaming it the 'lobotomy'. Instead of taking corings from the frontal lobes, Freeman's procedure severed the connection between the frontal lobes and the thalamus. Because Freeman lost his license to perform surgery himself after his last patient died on the operating table, he enlisted neurosurgeon James Watts as a research partner. One year after the first leucotomy, on September 14, 1936, Freeman directed Watts through the very first prefrontal lobotomy in the United States on housewife Alice Hood Hammatt of Topeka, Kansas. By November, only two months after performing their first lobotomy surgery, Freeman and Watts had already worked on 20 cases including several follow-up operations. By 1942, the duo had performed over 200 lobotomy procedures and had published results claiming sixty three percent improved, 23 percent were reported to be unchanged and fourteen percent were worse after the surgery. Freeman formulated a new procedure called the transorbital lobotomy. This new procedure became known as the 'icepick' lobotomy and was performed by inserting a metal pick into the corner of each eye-socket, hammering it through the thin bone there with a mallet, and moving it back and forth, severing the connections to the prefrontal cortex in the frontal lobes of the brain. The modifications to his lobotomy allowed Freeman to broaden the use of the surgery, which could be performed in psychiatric hospitals throughout the United States that were overpopulated and understaffed. In 1950 Walter Freeman's longtime partner James Watts left their practice and split from Freeman due to his opposition to the cruelty and overuse of the transorbital lobotomy. Following his development of the icepick lobotomy, Freeman began traveling across the country visiting mental institutions in his personal van, which he called the 'lobotomobile.' He toured around the nation performing lobotomies and spreading their use by educating and training staff to perform the operation. Freeman's name gained popularity despite the widespread criticism of his methods following a lobotomy on President John F. Kennedy's sister Rosemary Kennedy, which left her with severe mental and physical disability.