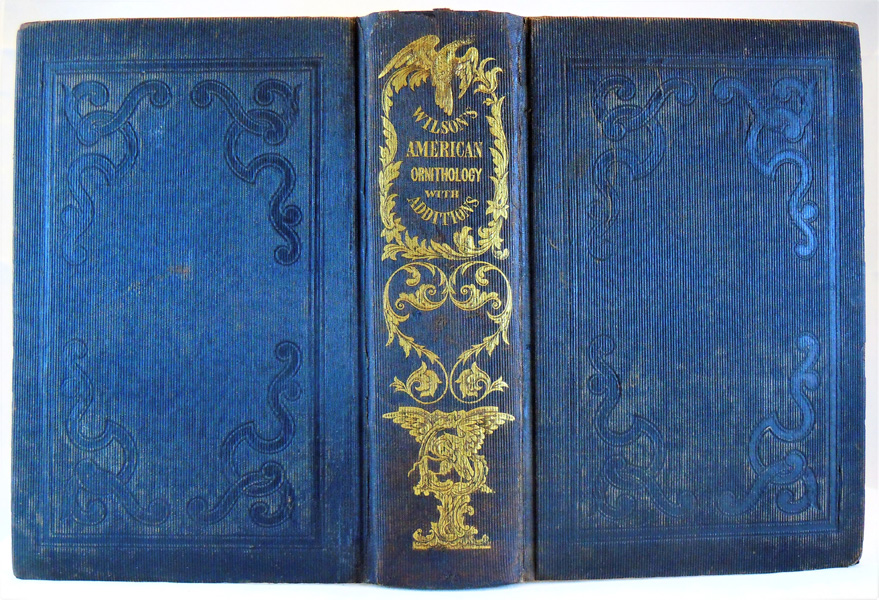 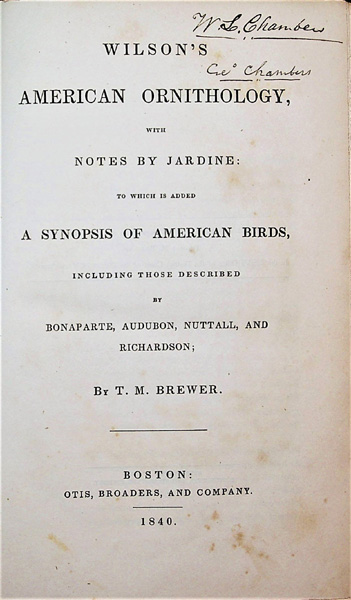 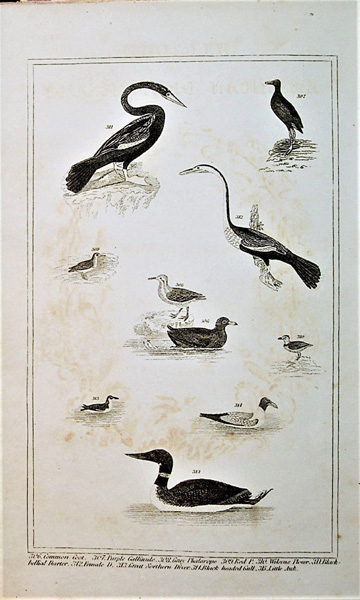 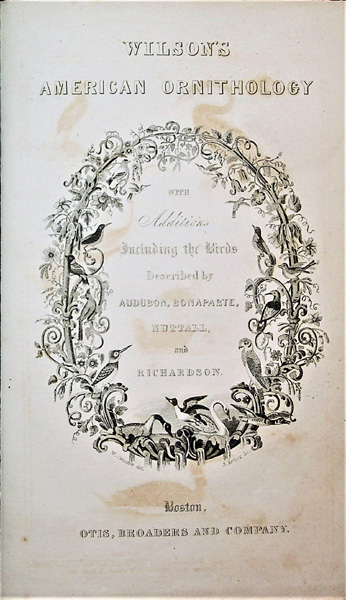 Wilson's American Ornithology with Additions Including the Birds Described by Audubon, Bonaparte, Nuttall, and Richardson

1840 SUPERB ILLUSTRATED SINGLE-VOLUME AMERICAN BIRD BOOK WITH CONTRIBUTIONS BY AUDUBON AND OTHERS. 5 x 8 x 2 inch hardcover, viii, 746 pages, original blindstamped brown cloth binding, expertly rebacked, conserving original decorative gilt spine title and design, new endpapers, charming engraved half title page with decorative wreath of birds. 25 steel engraved plates with tissue guards, Tightly bound, contemporary owners' signatures to top of title page, very light scattered foxing, overall very good. From the 'Advertisement' [Preface]: 'The want of an edition of Wilson's Ornithology, adapted to general circulation, has long been felt in the United States. While several popular editions have been published in Europe, there has been none here, except the original one, and another, with slight modifications; both of which, on account of their costliness, have been necessarily excluded from the hands of many who might desire to possess or peruse Wilson's work. The present work is designed to supply this want, and it is hoped it may serve at once to extend the fame of the author, to give a wider scope to the influence of his genius, and pro- mote an interest in the study of American ornithology. ... I should be guilty of great injustice, were I to omit to add how much I have been assisted by the labors and writings of the illustrious Audubon. With his free and generous consent, I have been permitted to draw from the materials which his industry and perseverance had prepared to my hands, and without which I could have done but little. --T.M.B.' The single volume offered here includes 25 very fine engravings with 5 - 20 individual birds per plate. Included are presently extinct species (Carolina parrot, ivory-billed woodpecker, passenger pigeon). The first octavo edition of Audubon's Birds of America (7 volumes containing 500 hand-colored plates) was published between 1840 and 1844. ALEXANDER WILSON (1766 - 1813) was a Scottish-American poet, ornithologist, naturalist, and illustrator. Identified by George Ord as the 'Father of American Ornithology', Wilson is now regarded as the greatest American ornithologist before Audubon. Wilson and his nephew left Scotland for America in May 1794. Opportunities were scarce for weavers, and Wilson turned to teaching in Pennsylvania and New Jersey, eventually settling into a position at Gray's Ferry, Pennsylvania, and taking up residence in nearby Kingsessing. Here Wilson met the famous naturalist William Bartram, who encouraged Wilson's interest in ornithology and painting. Resolving to publish a collection of illustrations of all the birds of North America, Wilson traveled widely, collecting, painting, and securing subscriptions for his work, the nine-volume American Ornithology (1808-1814). Of the 268 species of birds illustrated there, 26 had not previously been described. Wilson died during the preparation of the ninth volume, which was completed and published by George Ord. THOMAS MAYO BREWER (1814 - 1880) was an American naturalist, specializing in ornithology and oology. He graduated from Harvard College in 1835 and from Harvard Medical School three years later. His interest in ornithology was such that he was elected a member of the Boston Society of Natural History in 1835. He abandoned his career as a doctor after a few years to concentrate on ornithology, writing and politics, later becoming editor of the Boston Atlas in 1840. He was a friend of John James Audubon in that ornithologist's later life. In 1849, Brewer was placed in charge of the oological department for the Boston Society of Natural History. Brewer continued working as a publisher while working as an ornithologist. He joined the publishing firm of Hickling, Swan & Brown, which became Hickling, Swan & Brewer when he became a partner in 1857; this firm subsequently became Swan, Brewer & Tileston. As an editor, he published Alexander Wilson's 'Birds of America'.

Title: Wilson's American Ornithology with Additions Including the Birds Described by Audubon, Bonaparte, Nuttall, and Richardson

Wilson's American Ornithology with Additions Including the Birds Described by Audubon, Bonaparte, Nuttall, and Richardson