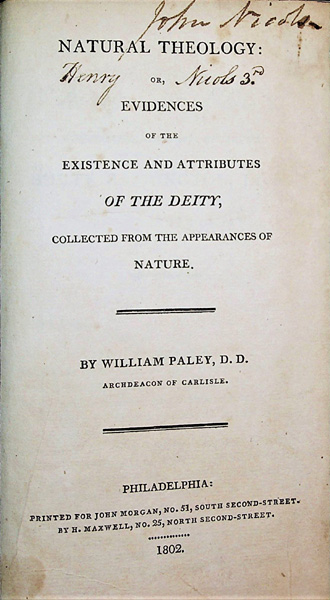 Natural Theology: or, Evidences of the Existence and Attributes of the Deity; Collected from the Appearances of Nature

1802 FIRST AMERICAN EDITION OF FAMOUS 19TH CENTURY BOOK ON NATURE'S 'INTELLIGENT DESIGN'. 8 inches tall hardcover, vi, 402 pages, original full leather binding, red leather label to spine. Covers, spine and rear hinge show residue from removal of tape, and entire cover and spine have been varnished. Front hinge has been strengthened with linen tape, binder's ticket (J.A.M. Heisington, Saint Paul, M.T. [Minnesota Territory]), bookplate of 'John Nicol's Library' to front paste-down, handstamp of Walter Kennedy to front endpaper, book ticket of 'Mrs. Wm. J. Dean, Saint Paul, Minnesota' verso of endpaper, ink signatures of John Nicols and Henry Nicols 3rd top of title page, signature of Henry Nicols 3rd top of dedication page, which has tape repair to corner, pencil calculations on rear paste-down. Despite wear to covers and traces of multiple owners, text is remarkably tight and unmarked, with only light age-toning. All pages are present and intact. Overall a good copy of this scarce first edition of an important book that played an important role in Darwin's initial attraction to the study of natural history. CONTENTS: State of the Argument; Of the succession of Plants and Animals; Of the Mechanical and Immechanical functions of Animals and Vegetables; Of Mechanical Arrangement in the Human Frame... Of the Bones, Of the Muscles, Of the Vessels of Animal Bodies; Of the Animal Structure regarded as a Mass; Comparative Anatomy, Peculiar Organizations, Prospective Contrivances, Relations, Compensation; The Relation of Animated Bodies to Inanimate Nature; Instincts; Of Insects, Of Plants, Of the Elements; Astronomy; Of the Natural Attributes of the Deity, Of the Unity of the Deity, The Goodness of the Deity; Conclusion. Paley's Natural Theology is an extended argument, constructed around a series of examples including finding a watch; comparing the eye to a telescope; and the existence of finely adapted mechanical structures in animals, such as joints which function like hinges or manmade ball and socket joints. Paley argues that these all lead to an intelligent Creator, and that a system is more than the sum of its parts. The last chapters are more theological in character, arguing that the attributes of God must be sufficient for the extent of his operations, and that God must be good because designs seen in nature are beneficial. The book was many times republished and remains in print. It continues to be consulted by creationists. Charles Darwin took its arguments seriously and responded to them; evolutionary biologists like Stephen Jay Gould and Richard Dawkins continue to discuss Paley's book to respond to modern proponents with similar ideas. WILLIAM PALEY (July 1743 - 25 May 1805) was an English clergyman, Christian apologist, philosopher, and utilitarian. He is best known for his natural theology exposition of the teleological argument for the existence of God in his work Natural Theology or Evidences of the Existence and Attributes of the Deity, which made use of the watchmaker analogy. Paley's Principles of Moral and Political Philosophy was one of the most influential philosophical texts in late Enlightenment Britain. It was cited in several parliamentary debates over the corn laws in Britain and in debates in the US Congress. The book remained a set textbook at Cambridge well into the Victorian era. Charles Darwin, as a student of theology, was required to read it when he did his undergraduate studies at Christ's College, but it was Paley's Natural Theology that most impressed Darwin even though it was not a set book for undergraduates. Portraits of Paley and Darwin face each other at Christ College still today. The first edition of Natural Theology: or, Evidences of the Existence and Attributes of the Deity was published in 1802 in London by J. Faulder, and the same year in Philadelphia (the present copy). The book was republished in many editions by publishers in cities including London, Oxford, Cambridge, Edinburgh and Philadelphia. The twentieth reprint was made in 1820. Versions appeared in years including 1802, 1807, 1809, 1813, 1818, 1819, 1821, 1823, 1825, 1826, 1829, 1830, 1840, 1854 and many later years. The book remains in print, with more recent editions for example in 2006, 2008, 2009, 2010 and 2014. CHARLES DARWIN'S studies at the University of Cambridge included two other texts by Paley, and in his final exams in January 1831 he did well in questions on these texts. He had to stay on until June, and read Paley's Natural Theology as well as John Herschel's Preliminary Discourse on the Study of Natural Philosophy and Alexander von Humboldt's Personal Narrative: these books inspired 'a burning zeal' to research natural history. After the Beagle voyage he began development of his theory of natural selection, and in 1838 opened a notebook listing 'books to be read', including 'Paley's Nat. Theology'. In 1859, on completing On the Origin of Species, he told a friend 'I do not think I hardly ever admired a book more than Paley's Natural Theology: I could almost formerly have said it by heart.' He later stated in his autobiography that he was initially convinced by the argument: 'Although I did not think much about the existence of a personal God until a considerably later period of my life, I will here give the vague conclusions to which I have been driven. The old argument of design in nature, as given by Paley, which formerly seemed to me so conclusive, fails, now that the law of natural selection has been discovered. We can no longer argue that, for instance, the beautiful hinge of a bivalve shell must have been made by an intelligent being, like the hinge of a door by man. There seems to be no more design in the variability of organic beings and in the action of natural selection, than in the course which the wind blows. Everything in nature is the result of fixed laws.'-Charles Darwin, The Autobiography of Charles Darwin 1809-1882.

Title: Natural Theology: or, Evidences of the Existence and Attributes of the Deity; Collected from the Appearances of Nature

Natural Theology: or, Evidences of the Existence and Attributes of the Deity; Collected from the Appearances of Nature