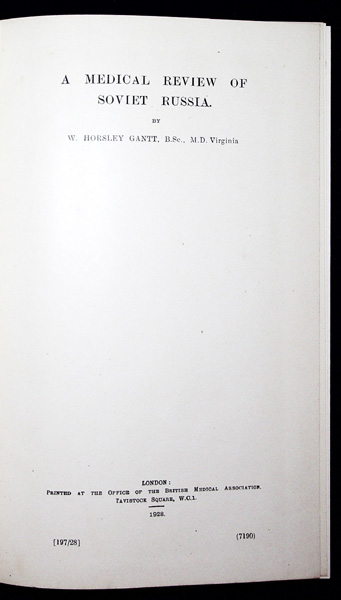 A Medical Review of Soviet Russia

AN AMERICAN PHYSICIAN REPORTS ON SOVIET MEDICINE AT THE START OF THE FIRST FIVE YEAR PLAN. 8 3/4 inches tall hardcover, black leatherette with gilt title to cover, 112 pages. Unmarked copy, very good. Reprinted from the British Medical Journal. TABLE OF CONTENTS: A Review of Medical Education in Soviet Russia; Hospitals and Health Conditions Scientific Work; Change in Type and Incidence of Disease; The Medical Profession, Soviet Science, and Soviet Sanitation ; Work of Pavlov, and Other Scientists. W. HORSLEY GANTT (1892-1980) was born in Wingina, Virginia. He received his B.S. in 1917 from the University of North Carolina and his M.D. in 1920 from the University of Virginia. Gantt went to Russia in the 1920s with the American Relief Administration, and while there became a student of Pavlov. He came to Johns Hopkins in 1929 and founded the Pavlovian Laboratory at the Johns Hopkins University School of Medicine. Gantt devoted his scientific career to furthering an understanding of the connections between physiological functions and behavior. He wrote over 400 scientific articles and several books, and he translated many of Pavlov's works into English. This book was published in 1928, 11 years after the Russian Revolution, and marked the beginning of Stalin's first Five Year Plan.

A Medical Review of Soviet Russia