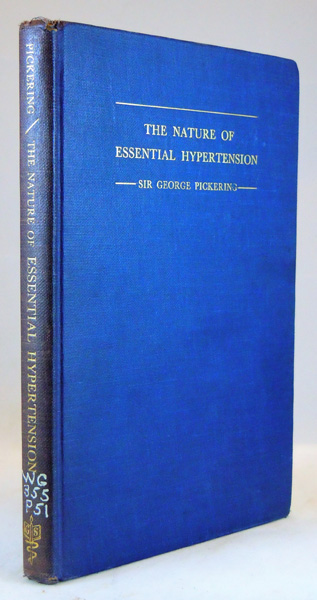 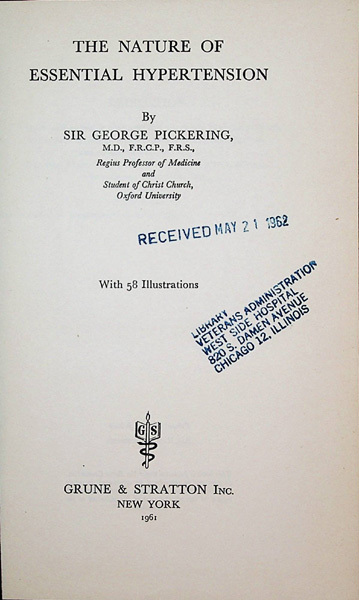 The Nature of Essential Hypertension

1961 SIR GEORGE PICKERING PROPOSES THAT HYPERTENSION IS A CONTINUUM WITH NORMOTENSION. 8 1/4 inches tall hardcover, original navy blue cloth binding, gilt title to cover and spine, spine ends frayed, library numbers bottom of spine, library handstamp front endpapers and title page, library ticket and pocket rear endpapers, overall good. PREFACE: This is a controversial book, and it is intended to be so. I have not tried to smooth the corners, because I believe that controversy is the life-blood of science. Disagreement stimulates the collection of further evidence. That, I hope, is an adequate justification. INTRODUCTION: The old idea concerning the nature of essential hypertension is that the disease represents a qualitative deviation from the norm. Somewhere, if we could only find it, there is, according: to this idea, a unique and specific fault which distinguishes those with the disease from those without it. The new idea is that essential hypertension represents a quantitative deviation from the norm. The disease represents high arterial pressure without specific cause, and the harmful effects of this raised pressure. The difference, between those with the disease and those without it, is one of degree and not of kind. The differences are quantitative, not qualitative. SIR GEORGE WHITE PICKERING (1904 - 1980) was a British medical doctor and academic. He was Regius Professor of Medicine at the University of Oxford from 1956 to 1968, and Master of Pembroke College, Oxford from 1968 to 1975. On 16 July 1957, he was knighted by Queen Elizabeth II at Buckingham Palace. Pickering defined Hypertension - not a well chosen word, a bastard of Greek and Latin parentage and signifying not high blood pressure but over-much stretching.

Title: The Nature of Essential Hypertension

The Nature of Essential Hypertension