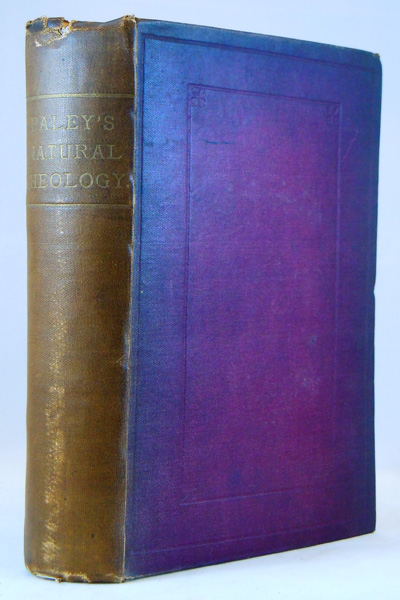 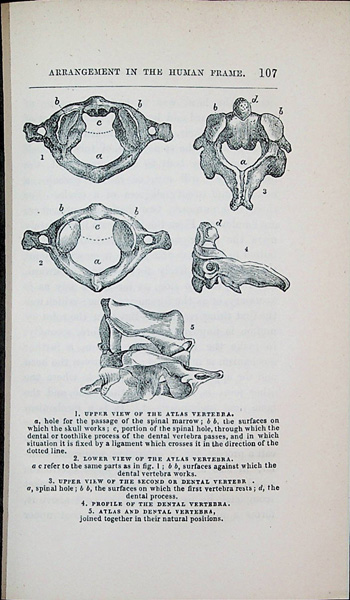 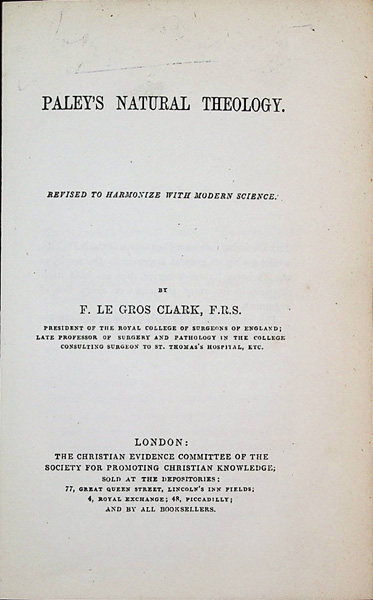 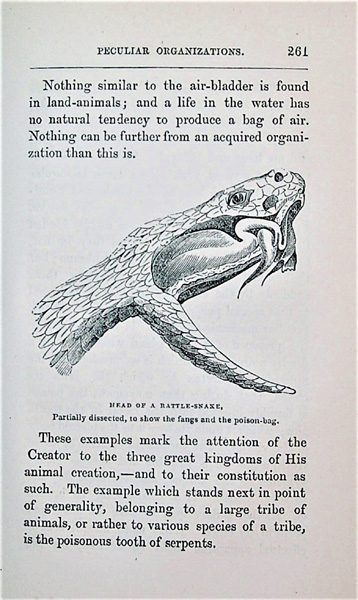 PALEY'S NATURAL THEOLOGY - FAMOUS CREATIONIST BIOLOGY TEXT REVISED WITH NEW ILLUSTRATIONS BY PROMINENT BRITISH SURGEON. 7 inches tall harcover, xv, 565 pages, original blindstamped red cloth binding, gilt title to spine, many fine wood engravings throughout the text. Covers darkened, spine faded, spine ends frayed, unmarked and overall very good. WILLIAM PALEY (1743 - 1805) was an English clergyman, Christian apologist, philosopher, and utilitarian. He is best known for his natural theology exposition of the teleological argument for the existence of God in his work Natural Theology or Evidences of the Existence and Attributes of the Deity, which made use of the watchmaker analogy. The first edition of Natural Theology: or, Evidences of the Existence and Attributes of the Deity was published in 1802 in London by J. Faulder, and the same year in Philadelphia. The book was republished in many editions by publishers in cities including London, Oxford, Cambridge, Edinburgh and Philadelphia. Paley's Natural Theology is an extended argument, constructed around a series of examples including finding a watch; comparing the eye to a telescope; and the existence of finely adapted mechanical structures in animals, such as joints which function like hinges or manmade ball and socket joints. Paley argues that these all lead to an intelligent Creator, and that a system is more than the sum of its parts. The last chapters are more theological in character, arguing that the attributes of God must be sufficient for the extent of his operations, and that God must be good because designs seen in nature are beneficial. The book was many times republished and remains in print. It continues to be consulted by creationists. Charles Darwin took its arguments seriously and responded to them; evolutionary biologists like Stephen Jay Gould and Richard Dawkins continue to discuss Paley's book to respond to modern proponents with similar ideas. FRANCIS LE GROS CLARK (1811 - 1892) was Lecturer on Anatomy and Physiology at the University of Dublin, and in 1843 he was appointed Assistant Surgeon at St Thomas's, where he became Chair of Surgery. He continued as Surgeon and as Lecturer till 1873, when Sir William MacCormac succeeded him. His relation to the College of Surgeons was distinguished. He became a Member in 1833 and President in 1874. He was well known for his course of lectures delivered at the College on the subject of 'The Principles of Surgical Diagnosis, especially in relation to Shock and Visceral Lesions'. For some years he was Surgeon to the Magdalen Hospital and to the London Female Penitentiary. As a Governor of St Thomas's and Consulting Surgeon he always took an active interest in the progress of the School. He was not only a distinguished surgeon, but a wise and safe one. Scientific surgery was his aim, and his thoughts and work were constantly in this direction. As an operator he was careful, deliberate, and not wanting in boldness. As a clinical teacher he was followed by an attentive class, who learnt something more than mere surgery: they learnt how to treat patients with kindness, thoroughness, and courtesy. Human nature was ever a study for him and patients were not looked on as mere cases. THE SOCIETY FOR PROMOTING CHRISTIAN KNOWLEDGE is the oldest Anglican mission organisation. It was founded in 1698 by Thomas Bray (an Anglican priest), and a small group of friends. The emphasis was on setting up schools, and the SPCK was a major factor in setting up church schools across Britain. Today, the SPCK is most widely known for its publishing of Christian books. A Scottish branch was founded in 1709. It sent missions to Scotland's Highlands, and a handful to Indians in the American colonies. SPCK's early publications were distributed through a network of supporters who received books and tracts to sell or give away in their own localities. Large quantities of Christian literature were provided for the Navy, and the Society actively encouraged the formation of parish libraries, to help both clergy and laity. By the nineteenth century, members had formed themselves into local district committees, many of which established small book depots-which at one time numbered over four hundred.

Edition: No date (same pagination as edition first published in 1875)

Publisher: London, The Christian Evidence Committee of the Society for Promoting Christian Knowledge: 1875