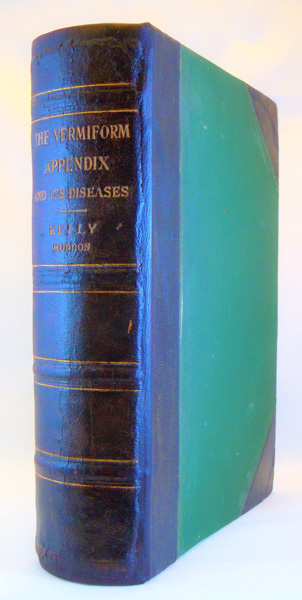 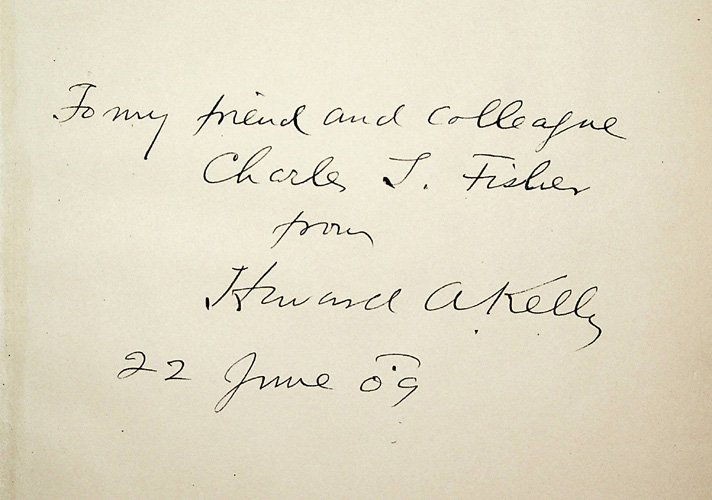 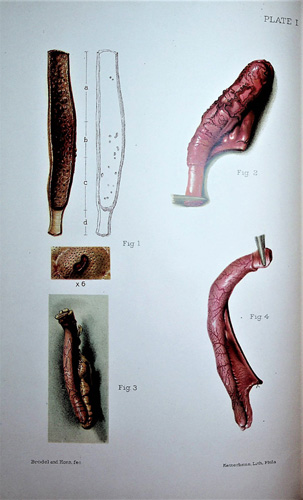 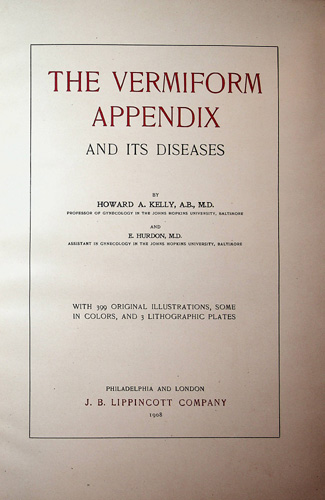 The Vermiform Appendix and Its Diseases

SIGNED COPY - MASSIVE ILLUSTRATED CLASSIC MONOGRAPH ON THE APPENDIX BY LEGENDARY SURGEON, MEMBER OF BIG FOUR PHYSICIAN FOUNDERS OF JOHNS HOPKINS SCHOOL OF MEDICINE. 10 1/2 inches tall hardcover, 3 inches thick, 3/4 black leather with green cloth binding, spine gilt with raised bands, original marbled endpapers, color frontis with tissue guard, with 399 original illustrations, some in color, some fold-out, and 3 lithographic plates. Inscribed and signed on front endpaper, "To my friend and colleague, Charles F. Fisher from Howard A. Kelly, 22 June 09." Age toning to edges, light wear to covers, expertly rebacked by master conservator, with original spine retained; bookplate of academic urologist to front paste-down, otherwise unmarked, overall very good. From the Preface: The present work is the outcome of an investigation undertaken some years ago when I first began to notice the condition of the appendix in every abdominal operation, an undertaking which soon grew to unexpected proportions. The literature of the subject is so extensive that I fear I may not have done full justice to the many faithful workers in the field; indeed, even as the pages are passing through the press, several valuable articles have appeared too late for recognition. Under the conviction that surgery and pathology are best taught by demonstration I have tried to parallel the text with graphic illustrations, and in a few instances the figure with its legend stands alone. I acknowledge here my indebtedness to Mr. Horn, Mr. Brodel, Miss Huntington, and Mr. Becker for their splendid artistic work; the enthusiasm with which they have entered into various researches and prosecuted every phase of their work has greatly en- hanced my own pleasure and satisfaction. The anatomical chapters were written by Mr. Brodel and illustrated, for the most part, by Miss Ruth Huntington, now Mrs. Brodel. Garrison-Morton No. 3571. HOWARD ATWOOD KELLY (1858 – 1943), M.D., an American gynecologist, obtained his B.A. and M.D. from the University of Pennsylvania. He, William Osler, William Halsted, and William Welch together are known as the Big Four, the founding professors at The Johns Hopkins Hospital in Baltimore, Maryland. He established gynecology as a specialty by developing new surgical approaches to gynecological diseases and pathological research. He also developed several medical innovations, including the improved cystoscope, Kelly's Clamp, Kelly's Speculum, and Kelly's forceps. MAX BRODEL (1870 – 1941) was a medical illustrator. Born in Leipzig, Germany, he began his artistic career after graduating from the Leipzig Academy of Fine Arts, working for Dr. Carl Ludwig. Under Dr. Carl Ludwig's instruction, he gained a basic knowledge of medicine and became recognized for his detailed medical illustrations. In the late 1890s, he was brought to the Johns Hopkins School of Medicine in Baltimore to illustrate for Harvey Cushing, William Halsted, Howard Kelly, and other notable clinicians. Kelly remarked that one of his greatest contributions to medicine was bringing Brodel to Baltimore. In addition to being an prolific medical illustrator, he developed new artistic techniques such as the carbon dust technique that helped the advancement of the quality and accuracy of medical illustrations for physicians. In 1911, he presided over the creation of the first Department of Art as Applied to Medicine; located at the Johns Hopkins School of Medicine, it continues to train medical illustrators to this day. HEAVY ITEM--INQUIRE FOR SHIPPING COSTS.

Title: The Vermiform Appendix and Its Diseases

The Vermiform Appendix and Its Diseases