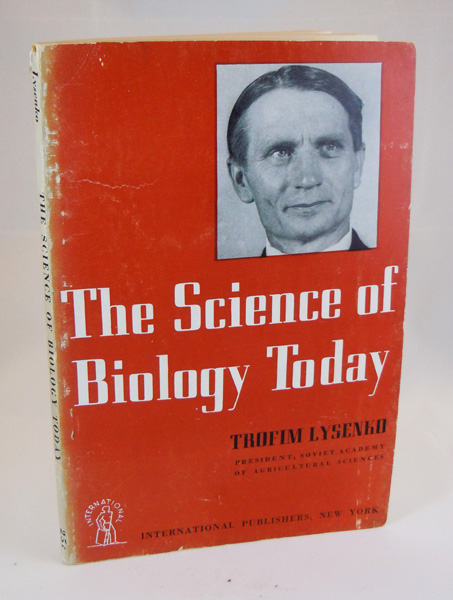 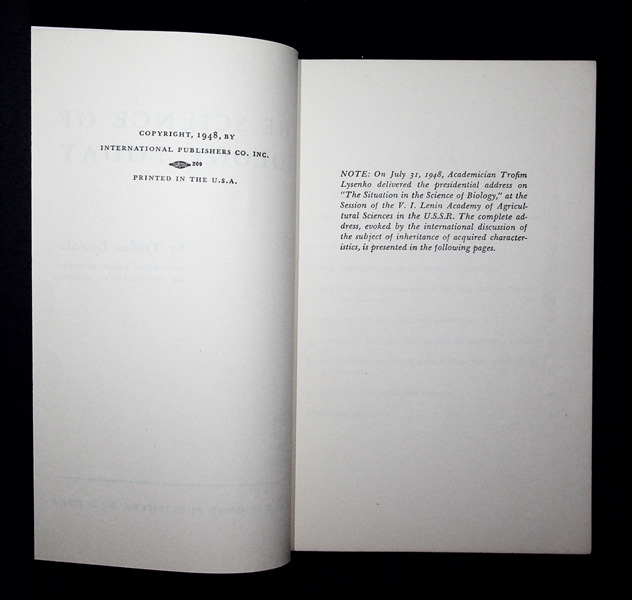 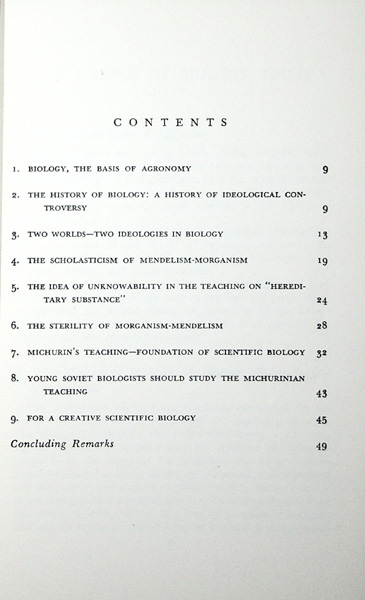 The Science of Biology Today

1948--FIRST EDITION--TEACHINGS OF NOTORIOUS DIRECTOR OF THE SOVIET ACADEMY OF AGRICULTURAL SCIENCES UNDER STALIN'S RULE. 8 inch tall thin paperbound book, color printed cover, text stapled 62 pages, unmarked, and very good. Back of book lists other titles available from International Publishers, including addresses by Joseph Stalin.The last sentence of the book: 'Glory to the great friend and protagonist of science, our leader and teacher, Comrade Stalin'! CONTENTS: Biology, the basis of agronomy; The history of biology: a history of ideological controvery; Two worlds--two ideologies in biology; The scholasticism of Mendelism-Morganism ; The idea of 'unkowability' in the teaching on 'hereditary substance'; The sterility of Morganism-Mendelism; Michurin's teaching-foundation of scientific biology; Young Soviet biologists should study the Michurinian teaching; For a creative scientific biology; Concluding remarks. TROFIM LYSENKO (1898-1976) was a Ukranian biologist who rejected Mendelian genetics and promoted a pseudoscientific approach to agriculture based on the inheritance of acquired characteristics. His experimental research in improved crop yields earned him the support of Joseph Stalin, In 1940 Lysenko became director of the Institute of Genetics within the USSR's Academy of Sciences, Scientific dissent from Lysenko's theories of environmentally acquired inheritance was formally outlawed in the Soviet Union in 1948. Following strong condemnation by international as well as Soviet scientists, Lysenko was finally removed from his post in 1965. Ironically, 50 years later, there are factions within the former Soviet Union that claim that Lysenko's work is vindicated by the new (legitimate) science of epigenetics (see Loren Graham, Lysenko's Ghost, 2016). International Publishers of New York was established by Alexander Trachtenberg in 1924 and specialized in marxist and socialist works. Trachtenberg was jailed for contempt of Congress when he would not turn over records to the McCarthyites.

Title: The Science of Biology Today

The Science of Biology Today