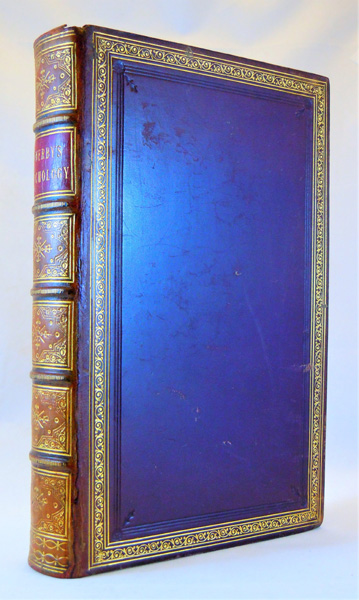 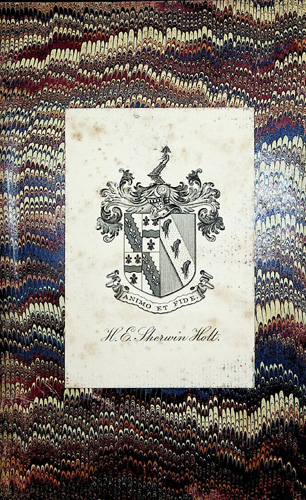 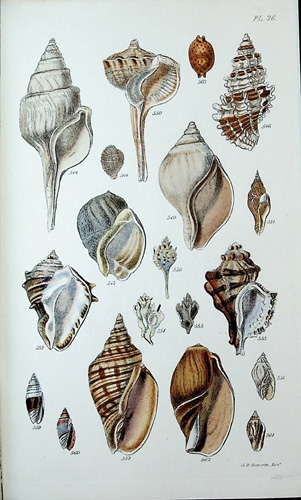 1852 FINE LEATHER BOUND MANUAL OF SEASHELLS BY SOWERBY, WITH 29 HAND-COLORED PLATES, COPY OF LT.-COL. H. E. SHERWIN HOLT, C.B.E. 8 1/2 inch tall hardcover, brown morocco leather binding with gilt borders to covers, spine with raised bands, compartments gilt, and gilt red leather title label, marble endpapers, all edges marbled, colored frontis, 2 folding tables, 28 fine handcolored plates with tissue guards, showing over 600 shells. Bookplate of H.E. Sherwin Holt to front paste-down. Light rubbing to covers, front hinge starting, binding tight, color plates are bright and unmarked. A beautiful book. GEORGE BRETTINGHAM SOWERBY I (1788 – 1854) was a British naturalist, illustrator and conchologist. George was educated at home under private tutors, and afterwards assisted his father in the production of illustrated works on natural history. On the latter's death in 1822, he and his brother James De Carle Sowerby continued their father's work on fossil shells, publishing the latter parts of the Mineral Conchology of Great Britain. He published about 50 papers on molluscs and started several comprehensive, illustrated books on the subject, the most important the Thesaurus Conchyliorum, a work that was continued by his son, George Brettingham Sowerby II and his grandson George Brettingham Sowerby III. One of his first works was the cataloguing of the collection of the Earl of Tankerville. He also dealt in shells and natural history objects, his place of business being first in King Street, Covent Garden, from which he removed to Regent Street, and finally to Great Russell Street. He was elected a fellow of the Linnean Society on 5 March 1811. HAROLD EDWARD SHERWIN HOLT (1862-1932}. A major in the Hants Carabineers Yeomanry, Mr. Holt's principal pursuits are shooting and automobilism. To the latter he has devoted considerable time. Amongst his principal achievements in this direction are the initiation of prominent leaders of society into the pleasures of motoring. Thus, the Prime Minister, the Lord Chancellor, Mr. Chaplin, who is responsible for the Locomotives on Highways Bill of 1896; Prince Louis Napoleon, and many others owe their first experiences to drives undertaken with Mr. Holt. To him fell the distinction of first entering the precincts of the House of Commons with a horseless vehicle, and what adds to the importance of the event is that the Right Hon. A. J. Balfour, M.P., and the Right Hon. H. Chaplin, M.P., accompanied him on his car on this memorable occasion. Until his resignation in 1900 Mr. Holt was a director of the Daimler Motor Company.