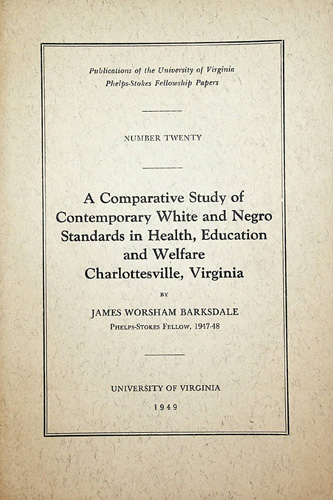 A Comparative Study of Contemporary White and Negro Standards in Health, Education and Welfare, Charlottesville, Virginia

1949 UNIVERSITY OF VIRGINIA MASTER'S DEGREE THESIS ANALYSIS OF RACIAL DISPARITIES IN VIRGINIA HEALTH CARE MID-TWENTIETH CENTURY. 9 inches tall paper bound thesis for Master of Arts at the University of Virginia, printed cover, many tables. Fine. Excerpts from the book: "In Charlottesville there is only one state tax supported general hospital for both whites and Negroes, the University of Virginia Hospital. The Martha Jefferson, a private hospital, admits only white patients. These two institutions constitute the total general hospital facilities for the City and County. The Martha Jefferson Hospital has no plans for admitting Negro patients in the future, but it does plan to continue receiving Negro out-patients for X-ray treatment and laboratory testing, thereby lending a hand to the University of Virginia Hospital in this service for Negroes. According to a spokesman at the Martha Jefferson, that hospital does not admit Negro patients as in-patients primarily because it does not have the facilities and space for them, and not because of any discriminatory attitude toward Negroes. Expert service is rendered by the University Hospital in all branches, but the accommodation it affords whites and Negroes is very unequal due chiefly to lack of space and bed facilities. The hospital has 94 private rooms for white patients such that from 4430 white patients in the year 1945 to 6705 in 1949 were accommodated, but not a single Negro private patient. One hospital authority stated that there is one private room for Negroes, although, according to statistics secured from the administrative office, that room was not used by Negroes as private room during the years 1945-1949. The hospital contains 48 semi-private rooms for white patients. The University Hospital does not provide for treatment of chronically ill Negro patients. Neither does it perform surgical operations upon Negroes for tuberculosis. As a matter of fact, surgical treatment for tuberculosis among Negroes is not available anywhere in the state of Virginia. This is no small disadvantage for the Negroes, especially in consideration of their far higher rate of tuberculosis as compared to that of whites. The Blue Ridge Sanatorium, located several miles outside the city limits, is open to whites only. White children have weekly movies, radio programs, and record playing over a loud speaker system. They also have Santa Claus and a Christmas tree at Christmas. Negro children have Santa Claus and Christmas tree at Christmas. Both white and Negro children, however, have instruction under the State Department of Education. Another deplorable condition exists in the fact that the Negro children's ward is Located in the basement of the hospital—a poor and unhealthy location. Separate ward facilities for Negro children over 12 years of age are insufficient, and two of the five-bed wards used for Negro children up to 12 years of age are dark and poorly ventilated. Because of the present facilities for Negro children at the University Hospital, it has been said that many Negro parents are reluctant to use this facility. There is also the lower educational status of the Negro population. As a result, the great mass of illiterate and semi-literate Negroes learn what they know about the nature of disease and cures for illnesses from folk beliefs and superstitions. Mental health and hygiene are recognized necessities for normal child development but these are relatively unknown phenomena where housing conditions are wretched. Lack of mental health and hygiene throughout youth and adolescence is a strong contributing factor to delinquency, crime, and other behavioral disorders. The Negro does not have an equal chance to avoid contracting tuberculosis, and he does not have equal access to preventive and curative treatment. In 1937 the tuberculosis rate for Negroes was approximately 17 times as high as that of whites. Therefore, it would seem desirable in the Negroes' chances for health and make them at least equal to those of whites. Negroes in Charlottesville have proportionately more deaths from all causes, and especially from the dread diseases like syphilis, cancer, heart disease, pneumonia, and nephritis than do whites. The reasons for the Negro's inferior health are reply rooted in his retarded education, lack of economic opportunity and social integration into the community, as manifested by racial segregation and discrimination.”

A Comparative Study of Contemporary White and Negro Standards in Health, Education and Welfare, Charlottesville, Virginia