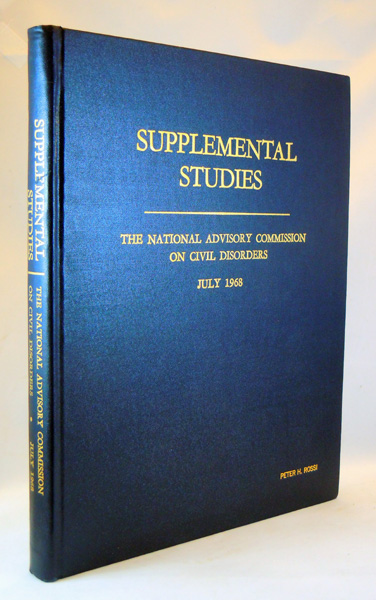 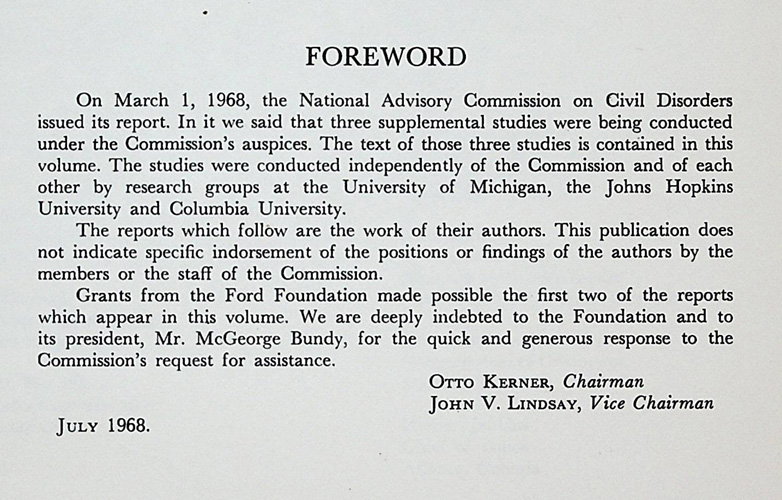 By: Campbell, Angus and Schuman, Howard

LANDMARK STUDY OF THE CIVIL RIGHTS RIOTS OF 1968--PERSONAL COPY OF NOTED SOCIOLOGIST PETER H. ROSSI. SUPPLEMENTAL STUDIES for the National Advisory Commission on Civil Disorders: Racial Attitudes in Fifteen American Cities, in original black cloth binding with gilt title on cover and spine, viii, 248 pages, COPY OF PETER H. ROSSI., his gilt name on cover, fine. FOREWORD TO SUPPLEMENTAL STUDIES: On March 1, 1968, the National Advisory Commission on Civil Disorders issued its report. In it we said that three supplemental studies were being conducted under the Commission's auspices. The text of those three studies is contained in this volume. The studies were conducted independently of the Commission and of each other by research groups at the University of Michigan, the Johns Hopkins University and Columbia University. The reports which follow are the work of their authors. This publication does not indicate specific indorsement of the positions or findings of the authors by the members or the staff of the Commission. Grants from the Ford Foundation made possible the first two of the reports which appear in this volume. We are deeply indebted to the Foundation and to president, Mr. McGeorge Bundy, for the quick and generous response to the Commission's request for assistance. Otto Kerner, Chairman John V. Lindsay, Vice Chairman July 1968. CONTENTS: Racial attitudes in 15 American cities: Black Views of Racial Issues; White Beliefs About Negroes; A Comparison of Black and White Attitudes and Experiences in the City; The Uses of Violence; Purpose of Study and Methods Employed; Views on Urban Problems; Images of the Urban Negro; Civil Disorders: Consequences and Causation; Reaction to the Commission's Report; Police in the Ghetto; Major Employers and Their Manpower Policies; Doing Business in the Ghetto: Retail Merchants; Teachers in Urban Public Schools; Public Welfare Workers; Grass Roots Politicians; APPENDIX A: How the Survey Was Conducted; APPENDIX B: Interview Schedules; WHO RIOTS?: A STUDY OF PARTICIPATION IN THE 1967 RIOTS. PROVENANCE: Peter H. Rossi (1921-2006) was Stuart A. Rice Professor of Sociology Emeritus at the University of Massachusetts-Amherst. He obtained his PhD in Sociology from Columbia University on the GI Bill in 1951. He held faculty positions at Harvard University, University of Chicago (Professor), and Johns Hopkins University (Professor and Department Chair) prior to his appointment at the University of Massachusetts. Author of more than 40 books and 200 scholarly journal articles, he was highly regarded for his work on evaluating social programs. He was elected fellow of the American Academy of Arts and Sciences and the American Association for the Advancement of Science. He was past president of the American Sociological Association and former director of the National Opinion Research Center, University of Chicago. His textbook, Evaluation: A Systematic Approach, now its 7th edition has become the classic text in the field of evaluation of social programs. His studies of how cities in America responded to the riots of the late 1960s (The Roots of Urban Discontent) grew out of work for the Kerner Commission. His efforts on evaluating public welfare and anti-crime programs was highly influential and was frequently cited by Senator Daniel Patrick Moynihan and other policy makers. Highlights of his academic career, spanning four institutions and six decades, include his stewardship of the National Opinion Research Center at the University of Chicago and the Social and Demographic Research Institute at University of Massachusetts. As director of the National Opinion Research center, he brought the center to national prominence and promoted the development of many top scholars in the field of sociology.