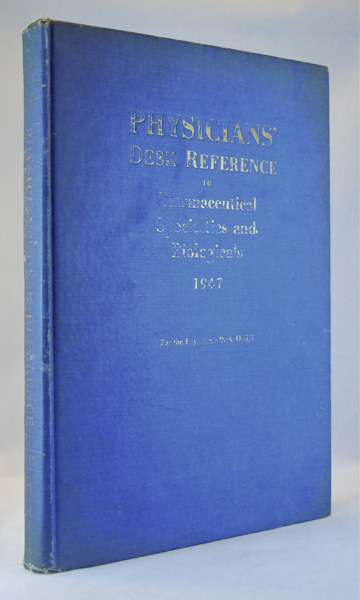 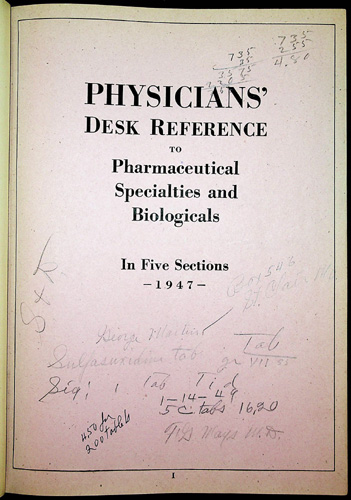 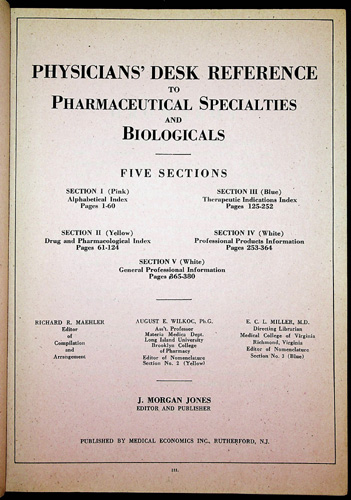 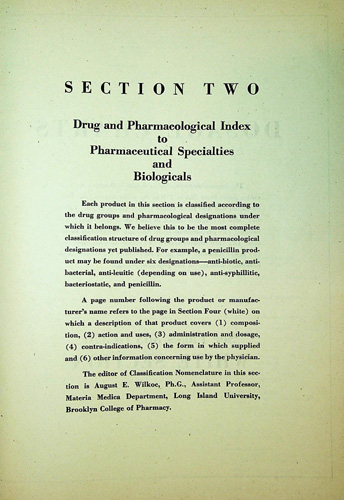 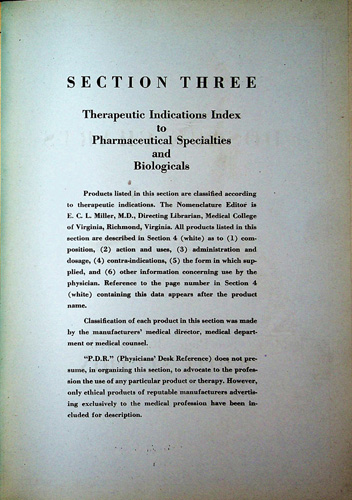 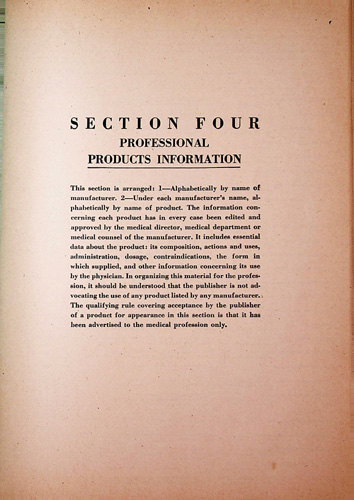 1947 RARE FIRST EDITION LANDMARK PHYSICIANS' DESK REFERENCE, HANDBOOK FOR PRESCRIPTION DRUGS NOW IN 71ST EDITION. 10 1/2 inches tall hardcover, blue cloth binding, gilt title to cover and spine (rubbed but clearly legible), light wear to edges of cover and spine ends, pink, yellow and blue paper sections, light soiling to edges of text, pencil notations to front paste-down and title page, corner missing from bottom of last page of text and endpaper (loss of part of 2 words only). Remarkably good condition for the rare first edition of a book that has become indispensable for the practicing American physician, and is now in its 71st edition (2017 most recent edition), and is usually discarded with the appearance of each new edition. In custom archival mylar cover. FOREWORD: This inaugural issue of P.D.R. (Physicians' Desk Refer- ence) has required two years to compile and produce. It is being distributed free to over one hundred thousand practicing physi- cians in the United States through the courtesy of the 132 manu- facturers whose major products are fully described in Section 4 (white). It will be produced and distributed annually to keep pace with the changes in formulae and the appearance of new drugs and new specialty products. In a matter of seconds P.D.R. will enable you to find the name and manufacturer of over 5,000 pharmaceutical special- ties and biological products. You will find complete descriptions for the use of over 1500 of the more important of the products that you use in practice every day. The first edition was reprinted in 2011 (65th anniversary), with the following comments: PDR has been the premier reference on prescription drugs for more than 65 years. A slim, but comprehensive volume entitled Physicians’ Desk Reference to Pharmaceutical Specialties and Biologicals made its first appearance in doctors’ offices in 1947. The concept behind the PDR First Edition was simple: provide doctors with a single, convenient reference to turn to for all their prescription needs. The idea met with immediate favor among physicians, and year after year the slim 380-page PDR First Edition has grown to more than 3,500 pages (and over 10GBs of data!) today. This reproduction provides a fun and interesting look back at what the standard of care for doctors was in 1947. The book includes interesting facts on how meat juice was used to fight nausea to the then radical new drug category, antihistamines. An invaluable gift or collectable especially for members of the healthcare community. Since the late 20th century, a consumer edition has been offered at a much reduced price. Electronic editions are available on CD-ROM and the World Wide Web to subscribers. In 1984, Paul C. Kranz and Michael Grondin travelled to Oradell, New Jersey, and presented to Medical Economics (then-publisher of the PDR) a prototype developed by Grondin on a TI 99/4A computer of how a digital copy of the PDR would work and benefit clinicians. The idea originally conceived by Kranz was well received by the president and vice-president of IT and an agreement was struck to investigate. The result was the PDR on CD-ROM. The main edition is usable by determined laypeople in conjunction with a medical dictionary. Today, the PDR is available in many forms, including the annual publication, online (PDR.net), and integrated directly into electronic health record (EHR) systems.