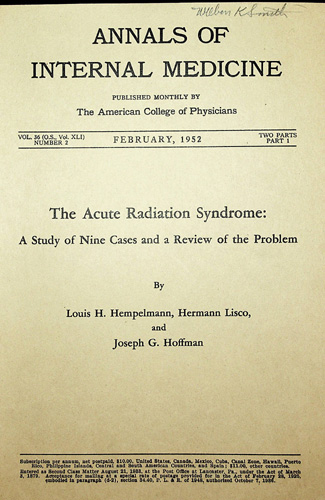 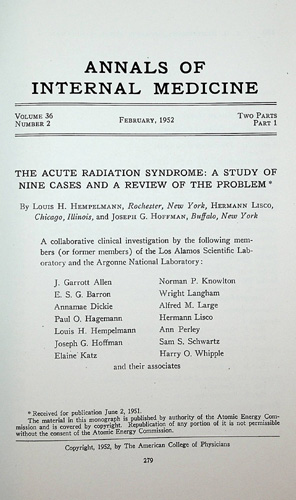 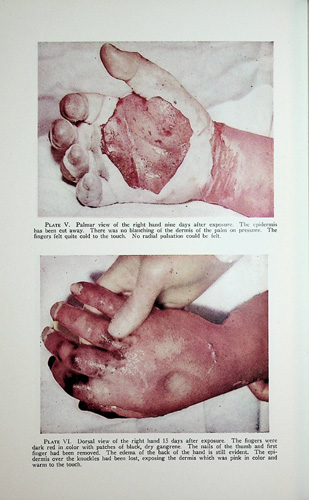 The Acute Radiation Syndrome: A Study of Nine Cases and a Review of the Problem

SCARCE EARLY MONOGRAPH ON ACUTE RADIATION SYNDROME, INCLUDING 24 COLOR PHOTOGRAPHS OF LESIONS, BY DIRECTOR OF HEALTH GROUP AT LOS ALAMOS. Original brown printed paper covers, signature of Wilbur K Smith to cover, fine; many B&W photographs, photomicrographs, and 24 color photographs at rear. FOREWORD: The cases of acute radiation syndrome reported in this monograph are among the few instances of such injuries that have occurred on the Atomic Energy Program since its inception. The study of the illness of these individuals and the efforts made to aid them add much to our knowledge of acute radiation injury in man. This is particularly true in those cases who were fatally injured. The story of the survivors shows that an individual :an be exposed to a large dose of radiation and still return to a productive vigorous life. The data presented in this article supplement the information gained at Hiroshima and Nagasaki, particularly for the period shortly after exposure when the Japanese observations were meager. Although these injuries are of the same general type as those caused by a full scale atomic explosion, it should be emphasized that they are peculiar to a nuclear reaction on a limited scale and unaccompanied by biologically significant amounts of heat and blast. Shields Warren. LOUIS HENRY HEMPELMANN (1914-1993) was Director of the Health Group at the Los Alamos site of the Manhattan Project. He remained at the forefront of radiobiology research even after the war, and was a close personal friend of J. Robert Oppenheimer. PROVENANCE: Copy of Wilbur K. Smith, M.D. (1902-1986). pediatric neurologist at the University of Rochester.

Title: The Acute Radiation Syndrome: A Study of Nine Cases and a Review of the Problem

The Acute Radiation Syndrome: A Study of Nine Cases and a Review of the Problem