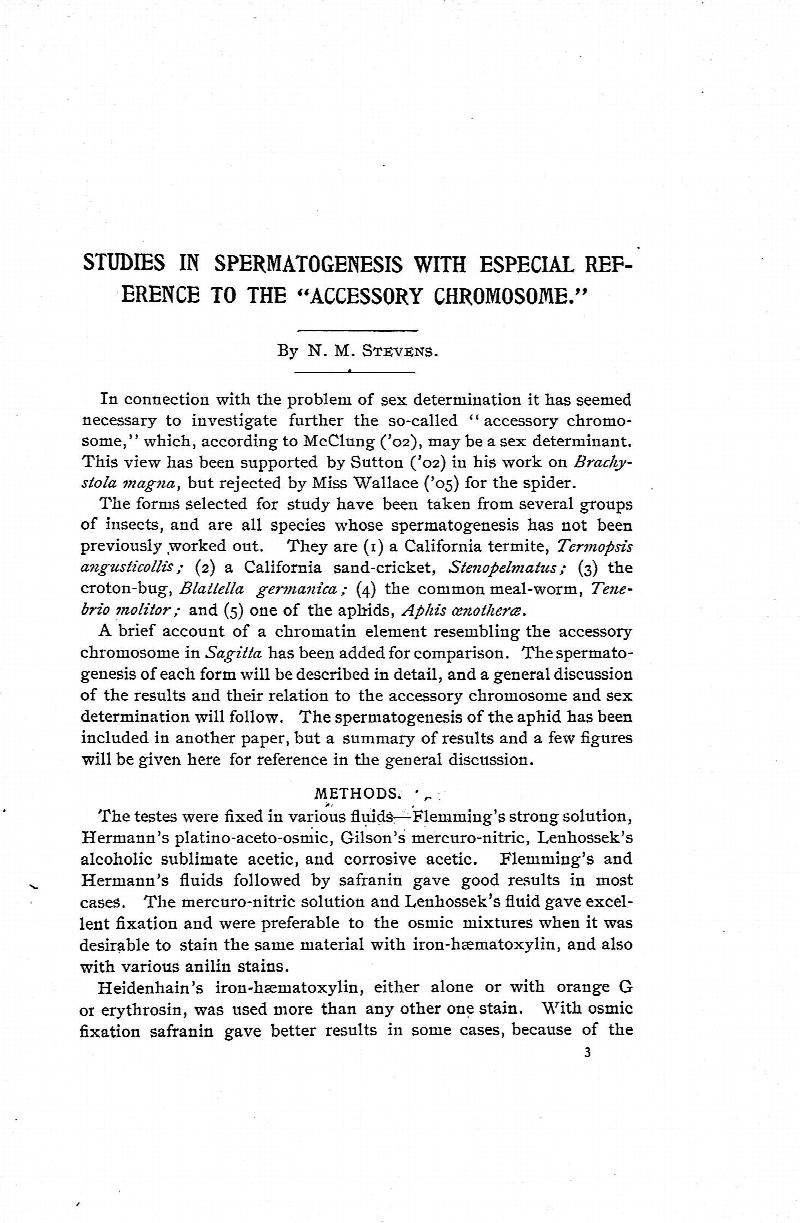 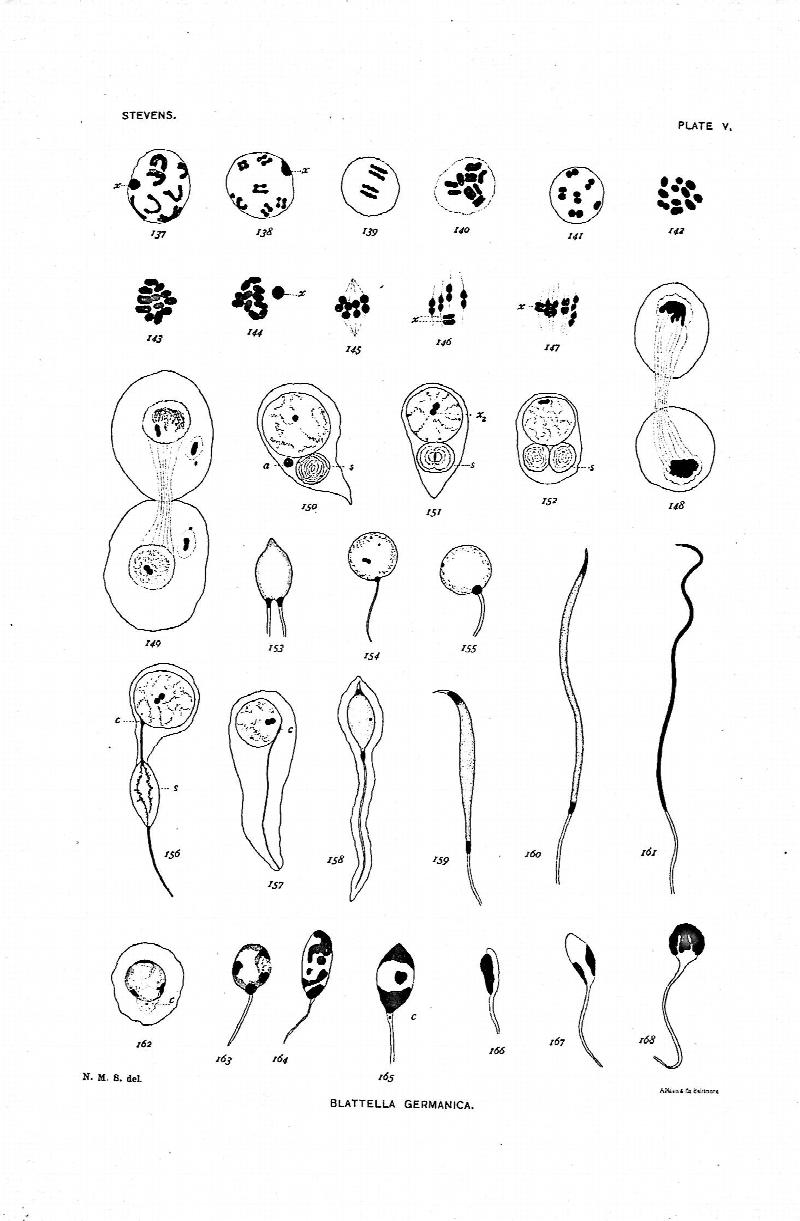 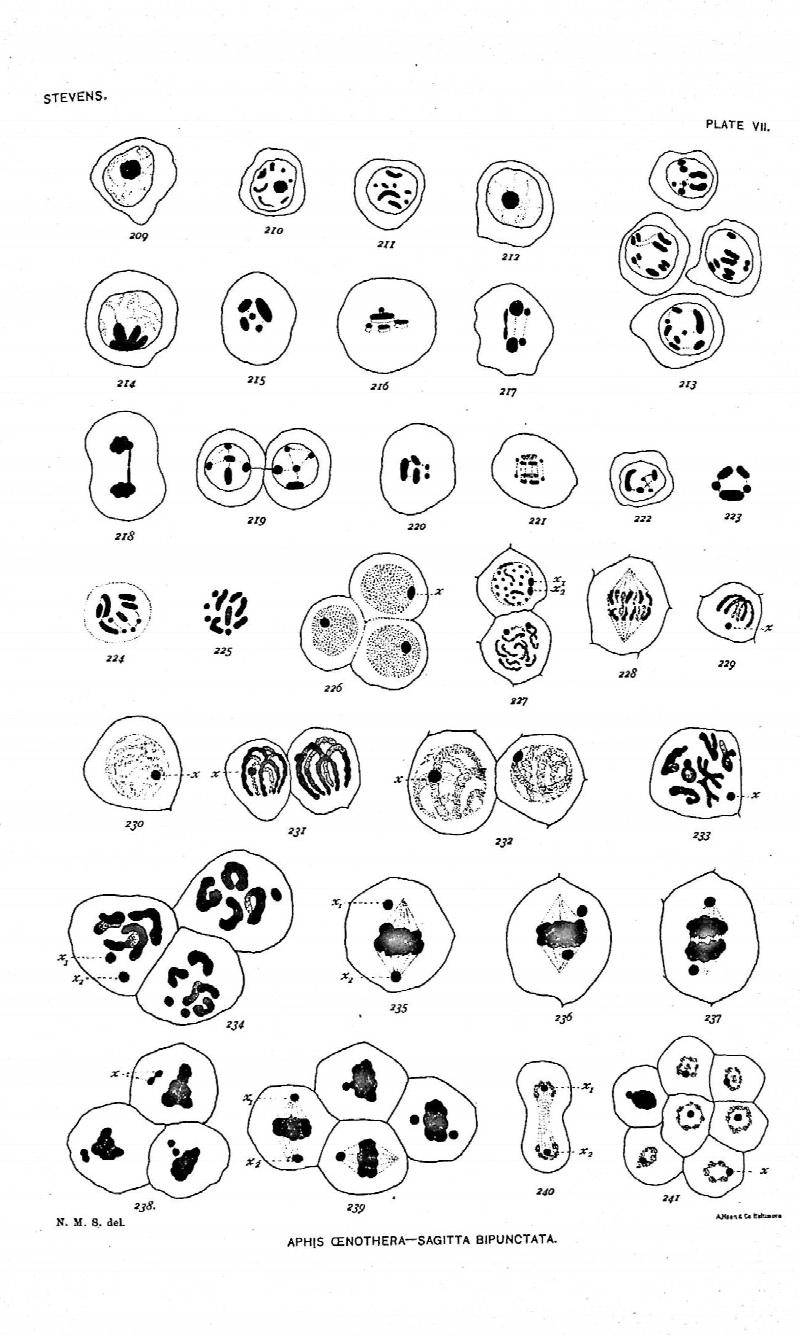 Studies in Spermatogenesis, Part II: a comparative study of the heterochromosomes in cerain species of coleoptera, hemiptera and lepidoptera, with especial reference to Sex Determination

RARE FIRST EDITION OF LANDMARK STUDY OF SEX DETERMINATION BY PIONEER FEMALE AMERICAN GENETICIST. Part II only: 10 inches tall hardcover, original green cloth boards, gilt title to cover, corners bumped, vg, ex-library, stamp of Scripps Institution for Biological Research title page. Pages 33-72, plates 8-15 containing 293 figures of chromosomes. Also included: 9 inches tall facsimile of Parts I and II in color printed paper covers, fine. NETTIE MARIA STEVENS (1861 - 1912) was an early American geneticist. She and Edmund Beecher Wilson were the first researchers to describe the chromosomal basis of sex. An outstanding student, Nettie Stevens completed in two years the four-year course at Westfield Normal School (now Westfield State University) in Massachusetts. She graduated at the top of her class. At Stanford, she received her B.A. in 1899 and her M.A. in 1900, having returned to college after an initial career as a school teacher. Stevens continued her studies in cytology at Bryn Mawr, where she was influenced by the work of the previous head of the Biology Department, Edmund Beecher Wilson, and by that of his successor, T. H. Morgan. She also studied marine organisms in Europe, at Helgoland and Naples Zoological Station. Stevens was one of the first American women to be recognized for her contribution to science. She discovered that in some species chromosomes are different among the sexes, by observations of insect chromosomes. The discovery was the first time that observable differences of chromosomes could be linked to an observable difference in physical attributes i.e. if an individual is a male or a female. The experiments done to determine this used a range of insects, she identified the Y chromosome in the mealworm Tenebrio. She deduced the chromosomal basis of sex depended on the presence or absence of the Y chromosome. Stevens is a somewhat controversial character. Following her death, Thomas Hunt Morgan wrote an extensive yet dismissive obituary for the journal Science, implying that she was more of a technician than a scientist. This later assessment belies his earlier statement in a letter of recommendation: Of the graduate students that I have had during the last twelve years I have had no one that was as capable and independent in research as Miss Stevens....

Title: Studies in Spermatogenesis, Part II: a comparative study of the heterochromosomes in cerain species of coleoptera, hemiptera and lepidoptera, with especial reference to Sex Determination

Studies in Spermatogenesis, Part II: a comparative study of the heterochromosomes in cerain species of coleoptera, hemiptera and lepidoptera, with especial reference to Sex Determination