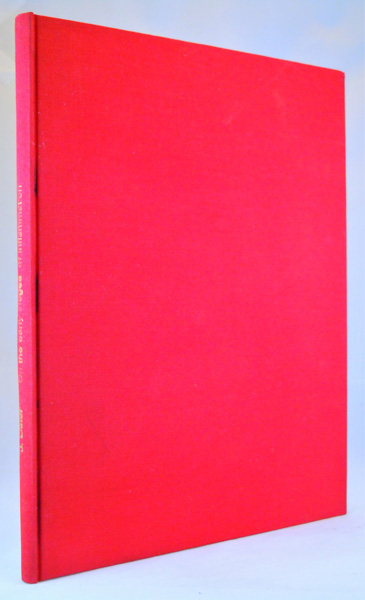 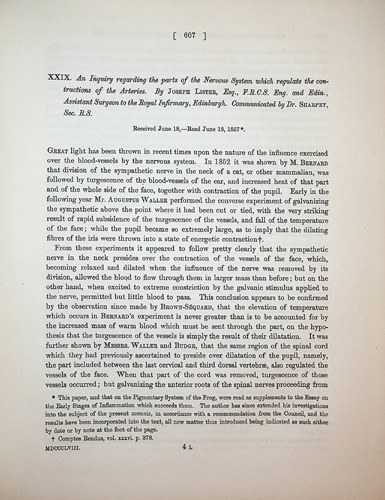 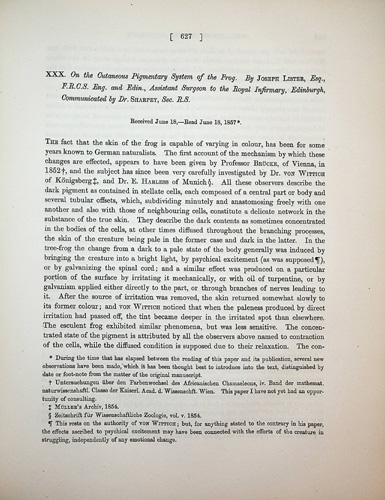 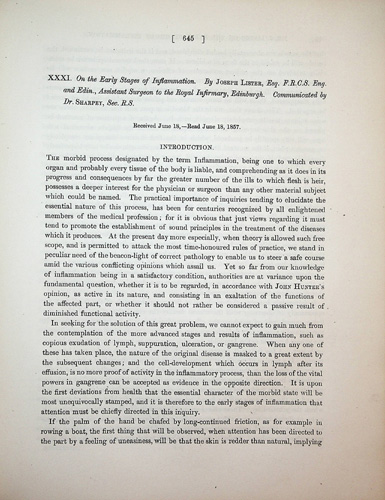 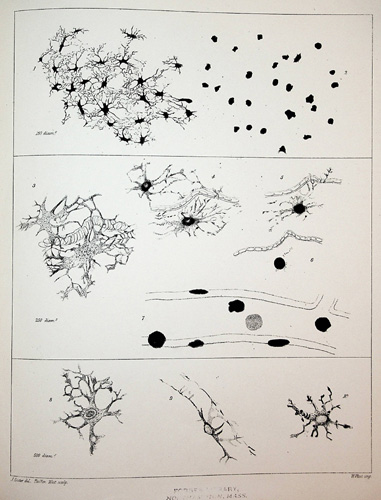 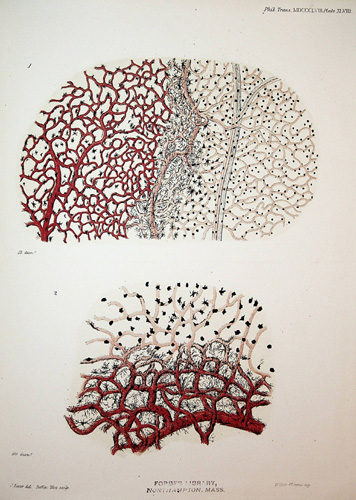 1859 FIRST EDITION OF LANDMARK RESEARCH PAPERS ON INFLAMMATION BY SIR GEORGE LISTER, FATHER OF ANTISEPSIS AND MODERN SURGERY. 11 1/4 inches tall hardcover, recent red cloth binding, spine gilt, pp 607-702 and two lithographed plates (one colored) extracted rom Philosophical Transactions of the Royal Society, vol. 148, Part II, for the year 1858. Clean and unmarked, fine. JOSEPH LISTER, 1st Baron Lister, OM PC PRS (1827 – 1912), known between 1883 and 1897 as Sir Joseph Lister, Bt., was a British surgeon and a pioneer of antiseptic surgery. He promoted the idea of sterile surgery while working at the Glasgow Royal Infirmary. Lister successfully introduced carbolic acid (now known as phenol) to sterilise surgical instruments and to clean wounds. Applying Louis Pasteur's advances in microbiology, Lister championed the use of carbolic acid as an antiseptic, so that it became the first widely used antiseptic in surgery. He first suspected it would prove an adequate disinfectant because it was used to ease the stench from fields irrigated with sewage waste. He presumed it was safe because fields treated with carbolic acid produced no apparent ill-effects on the livestock that later grazed upon them. Lister's work led to a reduction in post-operative infections and made surgery safer for patients, distinguishing him as the father of modern surgery. Lister was president of the Royal Society between 1895 and 1900. Following his death, a memorial fund led to the founding of the Lister Medal, seen as the most prestigious prize that could be awarded to a surgeon. Garrison-Morton No. 2298: This paper [On the early stages..,] reports the results of one of Lister's most valuable researches; his conclusions still hold today. It was Lister's first attempt to make any scientific analysis of the septic state (Singer and Underwood, p. 353) which was necessary to his understanding the nature of sepsis and its prevention by antiseptics. My inflammation work was, as I have said, an indispensable preliminary to that on antiseptic surgery.... (Lister in a letter, Feb. 17, 1907). Lister studied the phenomenon of inflammation through the effects of irritation on tissue, specifically on the tissue of the frog. These experiments and the results are described in the two accompanying articles and depicted in the fine plates.