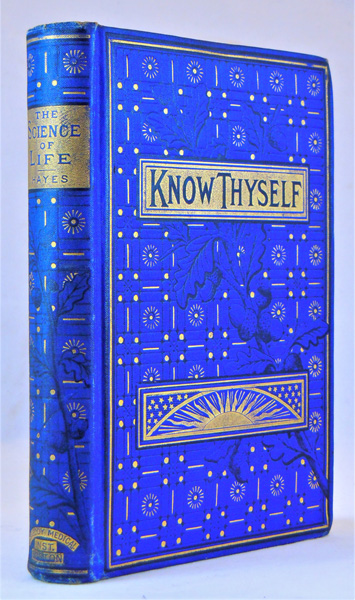 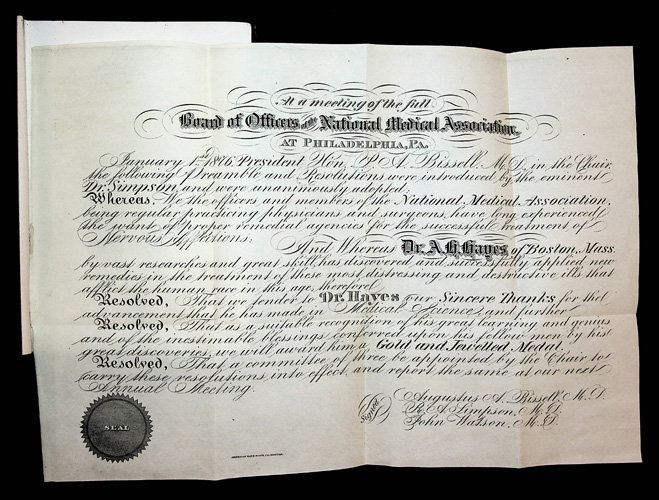 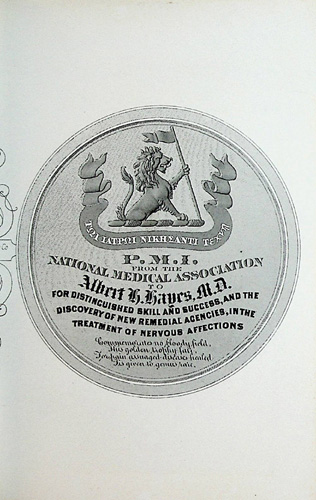 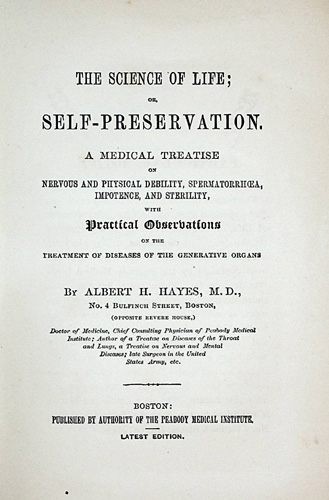 The Science of Life; or, Self-Preservation. A Medical Treatise on Nervous and Physical Debility, Spermatorrhoea, Impotence, and Sterility, with Practical Observations on the Treatment of Diseases of the Generative Organs

1881 BEAUTIFULLY BOUND SEXUAL PHYSIOLOGY BOOK FOR MEN, WARNING OF THE DANGERS OF MASTURBATION. 6 3/4 inches tall hardcover, highly decorative gilt cover and spine, all edges gilt, laid in folding facsimile of author's qualification certificates and tipped in copy of a fancy medallion honoring the author for his discovery of new remedial agencies, in the treatment of nervous affections. Facing title page: Particular Notice: The readers of this book are hereby cautioned that a spurious wort bearing the title Science of Life, or Self-Preservation, is advertised in the Dominion by irresponsible parties, who have not only stolen the title of the work which has been published by the Peabody Medical Insti- lute for the last fifteen years, but have also stolen the heading and wording of my advertise' ment, as well as many of the chapters of the book, which they have interlined with irrelevant and dangerous matter. This scheme has been undertaken at various times by others in the Dominion and States, but their efforts to ride into fame under false colors have ever proved a miserable failure. The only authorized edition is published by the Peabody Medical Institute, No. 4 Bulfinch Street, Boston, Mass. From the Preface: The motive which has led to the preparation and publication of this volume has been singly and solely a desire to present to the public, and especially to young men, a treatise which shall furnish the most valuable truths in reference to the physical organization of man, and convey to the minds of inquirers information that will en- able them to avoid the terrible dangers to which the unwary are constantly exposed. 12 editions were published between 1868 and 1881 in English. Authors often added “Dr.” or “M.D.” to their names and affiliated themselves with bogus medical schools, or otherwise inflated their credentials. ALBERT HAYES was no exception. Evidence suggests that although he was a doctor in the army, he was not Surgeon of the United States Army, as the title page suggests. He also attended lectures at Columbia College in Washington, D.C., but had not been, as he claimed in advertisements, the Vice President of Columbia College of Physicians and Surgeons in New York. He was successful at publishing books on male and female sexuality and running an office in Boston for treating venereal disease, promising “inviolable secrecy and certain relief” to his patients.

Title: The Science of Life; or, Self-Preservation. A Medical Treatise on Nervous and Physical Debility, Spermatorrhoea, Impotence, and Sterility, with Practical Observations on the Treatment of Diseases of the Generative Organs

The Science of Life; or, Self-Preservation. A Medical Treatise on Nervous and Physical Debility, Spermatorrhoea, Impotence, and Sterility, with Practical Observations on the Treatment of Diseases of the Generative Organs