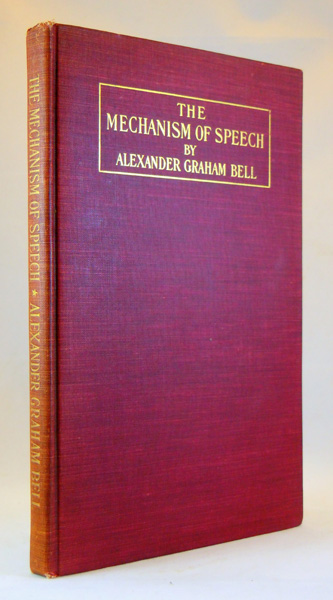 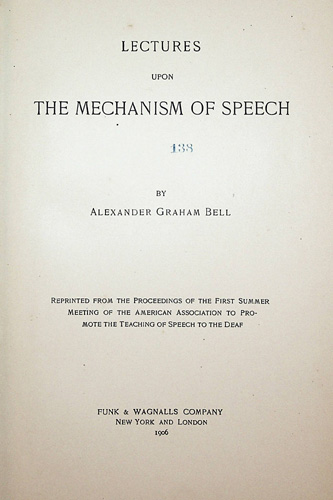 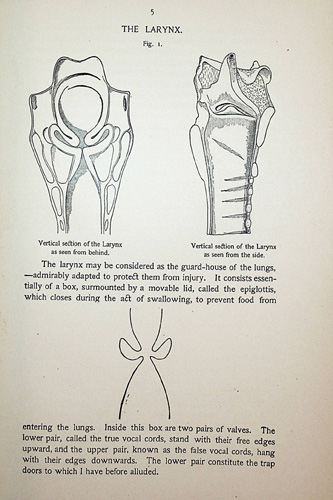 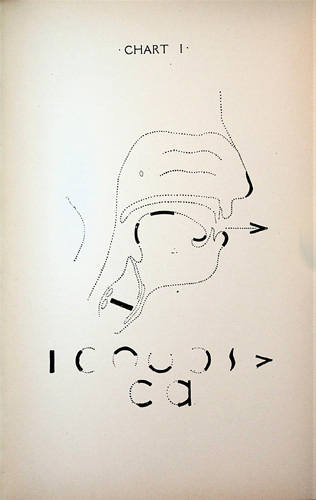 Lectures upon the Mechanism of Speech

IMPORTANT MONOGRAPH BY ALEXANDER GRAHAM BELL ON THE TEACHING OF SPEECH TO THE DEAF. 9 1/4 inches tall hardcover, original red cloth binding, gilt title to cover and spine, many illustrations throughout the text and 7 full page charts of phonetic profiles. Spine sunned, otherwise very good. Reviewed in Nature 75, 196 (27 December 1906): THIS interesting book consists of a series of lectures by Mr. Alexander Graham Bell, whose name in the future may be as honourably associated with his labours in the education of deaf mutes as with the invention of the telephone. His father, A. Melville Bell, many years ago, devised a method of representing, or rather symbolising, positions of the vocal organs. To this symbolic method he gave the name of “visible speech,” because anyone acquainted with the symbols could place his vocal organs in the desired positions, and then, on emitting the breath and bringing the vocal cords into action, could produce the desired sound. ALEXANDER GRAHAM BELL (1847 – 1922) was a Scottish-born scientist, inventor, engineer, and innovator who is credited with patenting the first practical telephone and founding the American Telephone and Telegraph Company (AT&T) in 1885. In 1884, Bell published a paper Upon the Formation of a Deaf Variety of the Human Race, in which he warned of a great calamity facing the nation: deaf people were forming clubs, socializing with one another and, consequently, marrying other deaf people. The creation of a deaf race that yearly would grow larger and more insular was underway. Bell noted that a special language adapted for the use of such a race already was in existence, a language as different from English as French or German or Russian. Some eugenicists called for legislation outlawing intermarriage by deaf people, but Bell rejected such a ban as impractical. Instead he proposed the following steps: (1) Determine the causes that promote intermarriages among the deaf and dumb; and (2) remove them. The causes he sought to remove were sign language, deaf teachers, and residential schools. His solution was the creation of special day schools taught by hearing teachers who would enforce a ban on sign language.--PBS.org From Alexander Graham Bell and His Role in Oral Education by Brian H. Greenwald, Ph.D., Gallaudet University, Alexander Graham Bell was born on March 3, 1847, the second of 3 children, in Edinburgh, Scotland to Melville and Eliza Bell. Bell's mother was deaf, and Bell's father and grandfather, also named Alexander Bell, were elocutionists specializing in voice presentation, delivery, and other aspects of speech teaching. Bell's two siblings succumbed to tuberculosis causing Melville Bell in 1870 to relocate the family to Brantford, Ontario, a supposedly more healthful climate to protect his sole surviving child. Bell's 1883 speech to the National Academy of Sciences, published as Memoir Upon the Formation of a Deaf Variety of the Human Race, was another call to promote oralism. Bell noted that deaf people tended to marry each other, and he argued that if they continued this pattern, a deaf variety of the human race would form at a critical period in American history. Bell identified signing residential schools, deaf newspapers, clubs, and associations as factors that encouraged the use of sign language and deaf intermarriage. He suggested preventive measures to dissuade the transmission of hereditary deafness. These included removing sign language from the residential schools, replacing deaf faculty with hearing teachers and staff, and establishing non-residential day schools or schools that would partially integrate deaf and hearing students. Many school boards and state legislatures heeded Bell and other oralists in their campaign to remove sign language from schools. This attempt at assimilation found a receptive audience in Progressive Era America, which was already anxious about the integration of immigrants.

Title: Lectures upon the Mechanism of Speech

Edition: First edition thus (reprinted from the proceedings of the first summer meeting of the American Association to Promote the Teaching of Speech to the D

Lectures upon the Mechanism of Speech