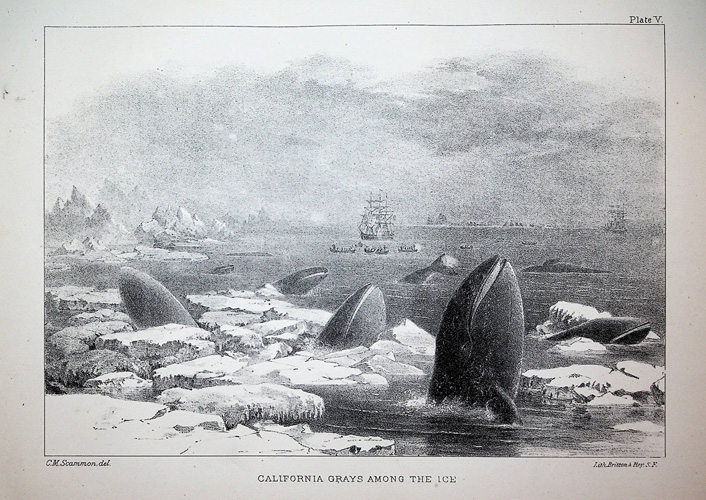 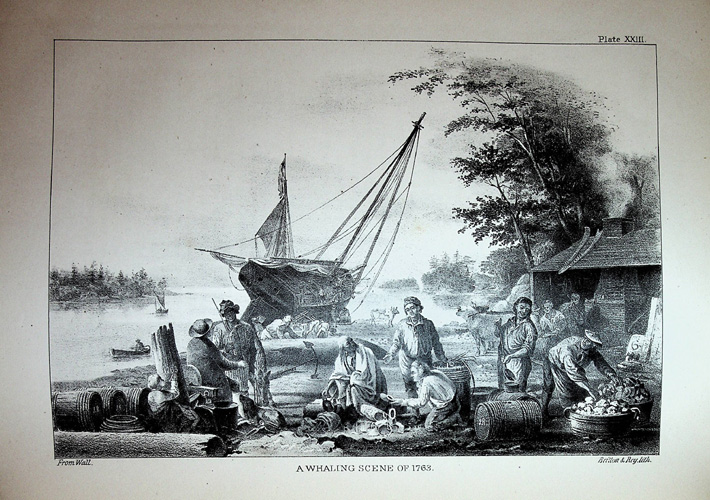 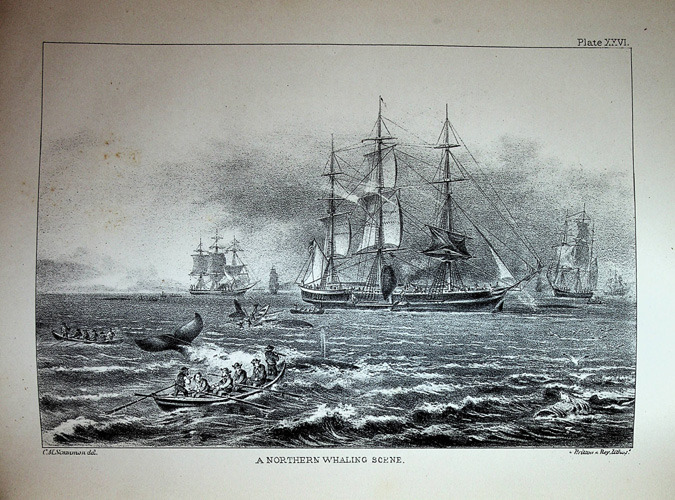 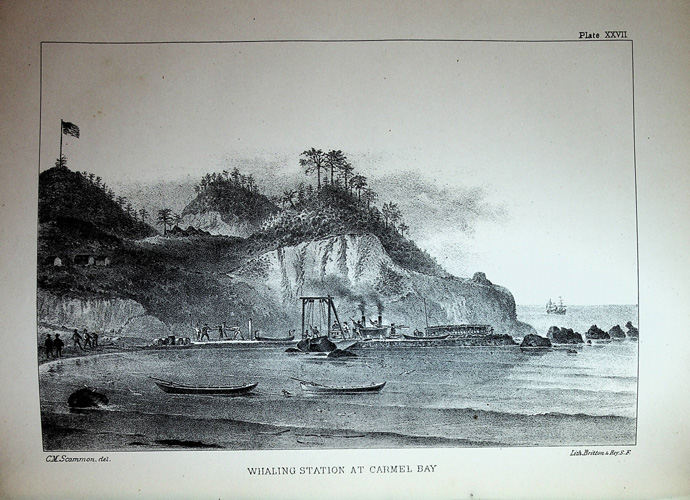 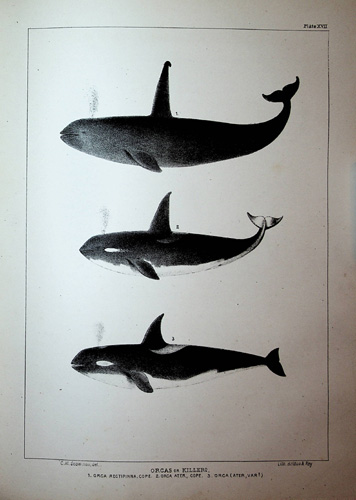 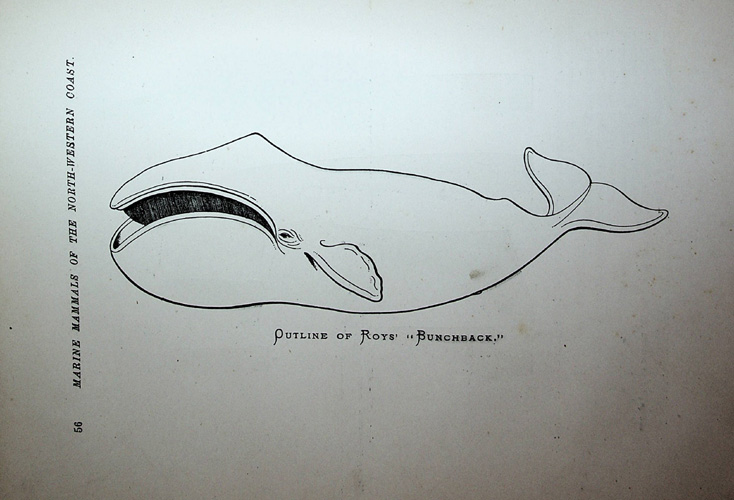 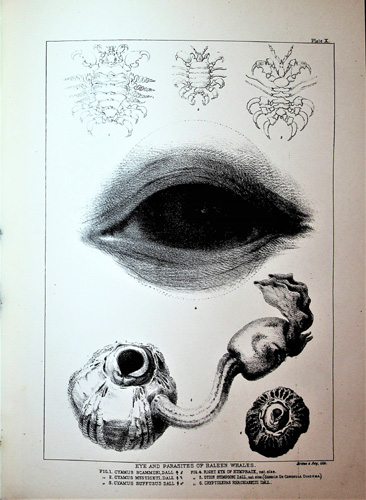 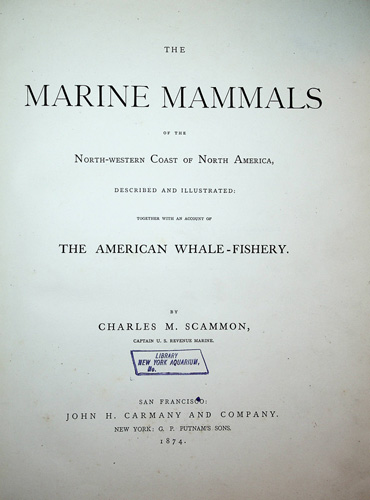 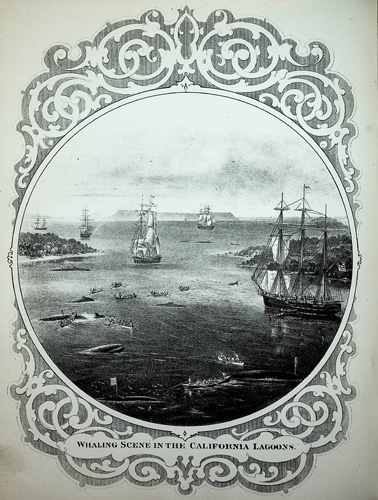 The Marine Mammals of the North-Western Coast of North America, described and illustrated: together with an account of the American Whale-Fishery

SCARCE BEAUTIFULLY ILLUSTRATED 19TH CENTURY HISTORY OF WHALING AND NATURAL HISTORY OF MARINE MAMMALS ON AMERICA'S WEST COAST. 11 1/2 inches tall hardcover, original black pebbled cloth boards, rebacked with black cloth, gilt black leather labels to spine, all edges gilt. Dedicated to the memory of Louis Agassiz. Very fine lithographic plates, including frontis of whaling scene in the California Lagoons, whaling scene of 1763, northern whaling scene, and whaling station at Carmel Bay; 6 mounted bound-in double-page lithographs of whales; illustrations of whaling instruments, and of anatomy of marine mammals. Cover corners restored, small book catalog clippings listing this book laid in on front free endpaper, small institutional library handstamp to bottom of title page (no other library marks), pencil note by previous owner below copyright, verso of title page: Capt Scammon died May 2, 1911, Oakland Cal. Aged 86--CHF, a few pencilled marginalia scattered throughout text, otherwise unmarked. Overall very good. CHARLES MELVILLE SCAMMONS (1825-1911) was a 19th-century whaleman, naturalist, and author. He was the first to hunt the gray whales of both Laguna Ojo de Liebre and San Ignacio Lagoon, the former once being called Scammon's Lagoon after him. In 1874 he wrote the book The Marine Mammals of the North-western Coast of North America, which was a financial failure. It is now considered a classic. Scammon was born in Pittston, Maine, on May 28, 1825. In 1850 he sailed for California. On April 1, 1852 he left San Francisco in command of the brig Mary Helen (160 tons) on a combined sealing and whaling voyage. He returned on August 26 with 350 barrels of oil obtained from elephant seals. During the winter of 1855-56 he was among the vessels hunting gray whales in Magdalena Bay, when he was commanding the ship Leonore. In December 1857, commanding the brig Boston, with the schooner-tender Marin, he first hunted the gray whales of Laguna Ojo de Liebre, catching twenty. The following winter (1858–59), commanding the bark Ocean Bird and accompanied by the schooner tenders A.M. Simpson and Kate, he returned to the lagoon, catching forty-seven cows. In the winter of 1859-60 he first exploited another lagoon to the south, San Ignacio. Within a few seasons it had been swept clean of whales. HEAVY ITEM--INQUIRE FOR SHIPPING COSTS.

Title: The Marine Mammals of the North-Western Coast of North America, described and illustrated: together with an account of the American Whale-Fishery

The Marine Mammals of the North-Western Coast of North America, described and illustrated: together with an account of the American Whale-Fishery