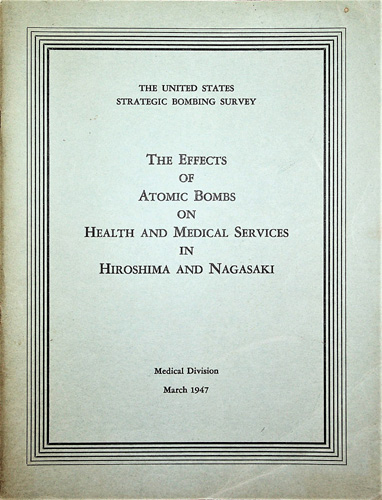 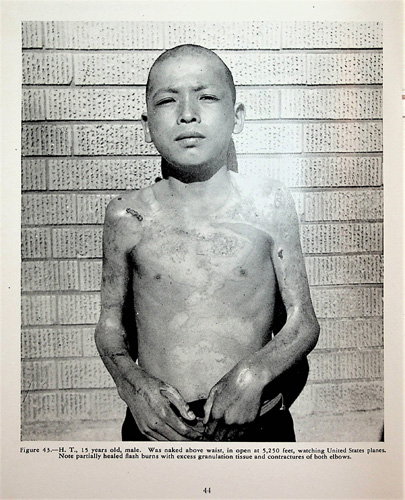 The Effects of Atomic Bombs on Health and Medical Services in Hiroshima and Nagasaki. The United States Strategic Bombing Survey, Medical Division

1947 FIRST REPORT OF HEALTH EFFECTS OF ATOMIC BOMBS IN HIROSHIMA AND NAGASAKI. 10 1/4 inches tall stapled book, printed paper covers, over 50 black & white photographs of ruins and victims of first atomic bombs used in World War II. Age-toning and slight wear to edges, unmarked and overall very good. FOREWORD The United States Strategic Bombing Survey was established by the Secretary of War on 3 November 1944, purusant to a directive from the late President Roosevelt. Its mission was to con- duct an impartial and expert study of the effects of our aerial attack on Germany, to be used in connection with air attacks on Japan and to estab- lish a basis for evaluating the importance and potentialities of air power as an instrument of military strategy, for planning the future develop- ment of the United States armed forces, and for determining future economic policies with respect to the national defense. A summary report and some 200 supporting reports containing the find- ings of the Survey in Germany have been i Published. On 15 August 1945, President Truman requested that the Survey conduct a similar study of the effects of all types of air attack in the war against Japan, submitting reports in duplicate to the Secretary of War and to the Secretary of the Navy. The Survey interrogated more than 700 Japa- military, Government, and industrial officials. It also recovered and translated many documents which not only have been useful to the Survey, but also will furnish data valuable for other studies. Arrangements have been made to turn over Survey's files to the Central Intelligence Group, through which they will be available for further examination and distribution.

Title: The Effects of Atomic Bombs on Health and Medical Services in Hiroshima and Nagasaki. The United States Strategic Bombing Survey, Medical Division

The Effects of Atomic Bombs on Health and Medical Services in Hiroshima and Nagasaki. The United States Strategic Bombing Survey, Medical Division