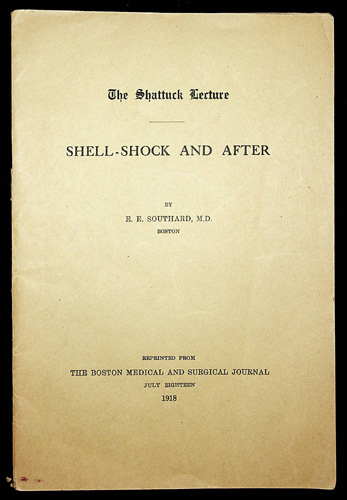 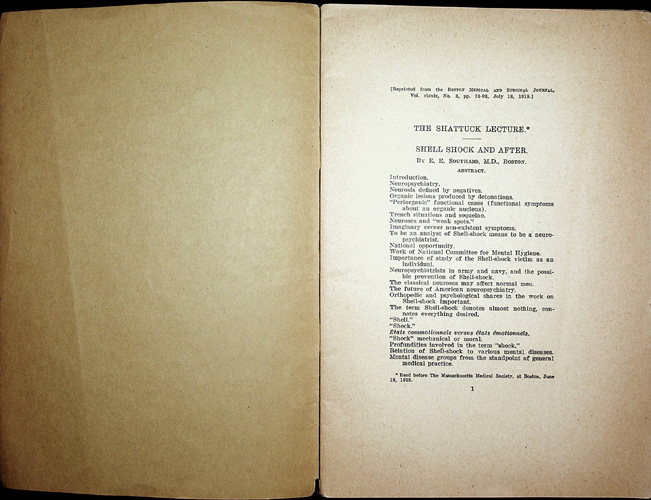 Shell-Shock and After - The Shattuck Lecture

1918 LANDMARK LECTURE BY PIONEER INVESTIGATOR OF SHELL-SHOCK IN WORLD WAR I. 9 inches tall offprint from The Boston Medical And Surgical Journal, July 18, 1918; brown printed paper covers, lightly browned pages, 68 pages, unmarked and very good. ELMER ERNEST SOUTHARD (1876 - 1920) was an American neuropsychiatrist, neuropathologist, professor and author. Born in Boston, Southard lived there for almost his entire life. He attended Boston Latin School, then completed college and medical school at Harvard University. While studying at Harvard, he distinguished himself as a chess player. Southard briefly studied in Germany, then returned to the United States as a pathologist at Danvers State Hospital. He held academic appointments at Harvard University and Harvard Medical School. Southard headed the Boston Psychopathic Hospital after its opening in 1912. There he pioneered the pathologic study of the brain and was particularly interested in the study of shell shock and schizophrenia. He published several books, including Shell Shock and Other Neuropsychiatric Problems, which included nearly one thousand case histories. Southard served as president of the American Medico-Psychological Association and the Boston Society of Psychiatry and Neurology. He held advisory positions with the U.S. Chemical Warfare Service and with the Eugenics Record Office. Southard was also an influential mentor, providing guidance to several well-known figures in psychiatry and psychology. He worked with Myrtelle Canavan early in her career, and he inspired Karl Menninger's interest in psychiatry. Comparative psychologist Robert Yerkes referred to Southard as my master of psychopathology. Southard engaged in early studies of the phenomenon of shell shock in the World War I era. In the debate over whether shell shock resulted from physical or emotional causes, Southard found overlap between organic and functional ailments and preferred not to make distinctions between the two. In Shell Shock and Other Neuropsychiatric Problems, he described the term shell shock as advantageous because it compared with the more acutely terrible and life-in-the-balance thing we know as traumatic or surgical shock. Indeed, once the condition was widely known to not result from physical forces, a stigma arose for patients, and arguments over its actual origins stood in the way of effective treatment.

Title: Shell-Shock and After - The Shattuck Lecture

Shell-Shock and After - The Shattuck Lecture