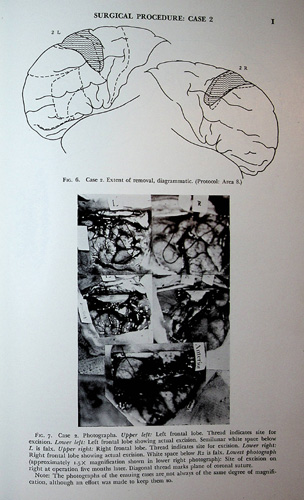 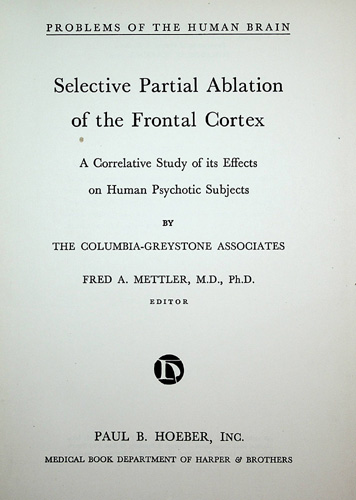 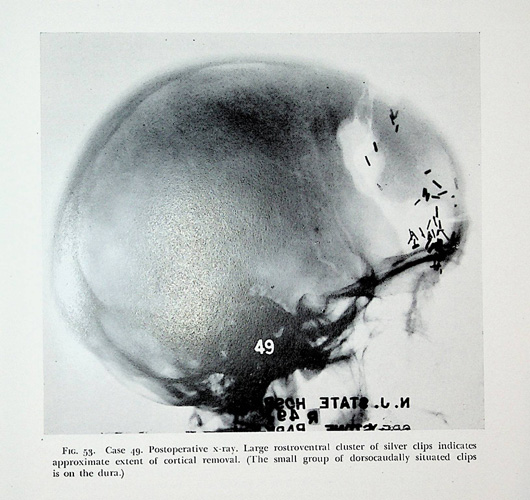 Selective Partial Ablation of the Frontal Cortex. A Correlative Study of its Effects on Human Psychotic Subjects by the Columbia-Greystone Associates

By: Mettler, Fred A.

LANDMARK REPORT OF CONTROLLED STUDY OF FRONTAL LOBOTOMY IN PSYCHOTIC PATIENTS--ASSOCIATION COPY. 10 1/4 inches tall hardcover, original red cloth binding, gilt title to spine, handstamp of Frank K. Beach to front endpaper, 517 pages, many illustrations and photographic plates. Light fading to spine, gilt lettering bright, binding tight, pages bright and unmarked, very good. PREFACE: In this report we present a detailed account of our study of the 48 patients in our series—24 of whom were operated upon and 24 in a control group. ... While we feel that much has been accomplished by this project, much more remains to be done. We now see more clearly, and have attempted to set down, many of the hurdles which must be overcome before we understand the func- tions of various parts of the brain. We were occasionally frustrated in our efforts to follow certain lines of investigation, both by practical inability to apply known technics and also by the non-existence of technics for certain studies. These are among the areas requiring immediate study. FRED ALBERT METTLER (born 1907) was Professor of Anatomy, Columbia University, New York. PROVENANCE: FRANK AMBROSE BEACH, JR. (1911 – 1988) was an American ethologist, best known as co-author of the 1951 book Patterns of Sexual Behavior. He is often regarded as the founder of behavioral endocrinology, as his publications marked the beginnings of the field. Donald Dewsbery, writing for the National Academy of Sciences, called Beach arguably the premier psychobiologist of his generation, influencing the development of psychobiology in numerous, diverse ways.

Title: Selective Partial Ablation of the Frontal Cortex. A Correlative Study of its Effects on Human Psychotic Subjects by the Columbia-Greystone Associates

Selective Partial Ablation of the Frontal Cortex. A Correlative Study of its Effects on Human Psychotic Subjects by the Columbia-Greystone Associates