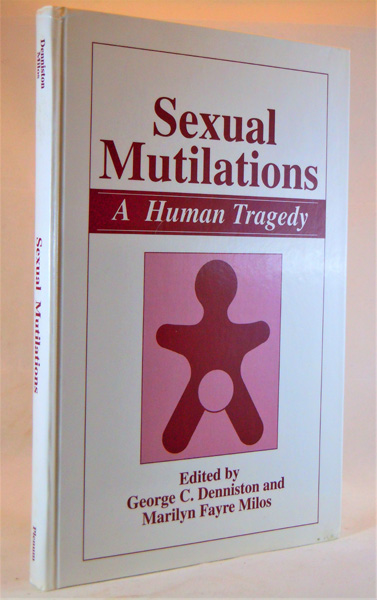 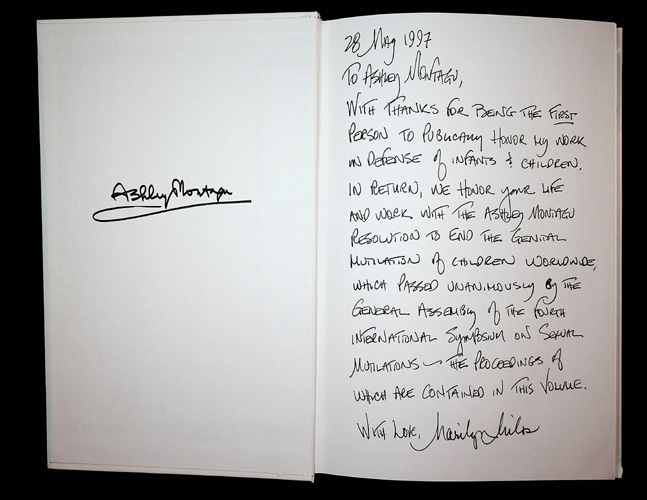 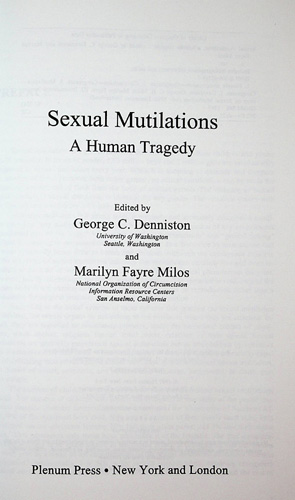 1997 PROCEEDINGS OF INTERNATIONAL SYMPOSIUM ON SEXUAL MUTILATIONS SIGNED BY EDITOR AND INSCRIBED TO ASHLEY MONTAGU, WITH HIS SIGNATURE. 10 inches tall hardcover, color printed laminated boards, no jacket as published, xiv, 237 pages, black and white illustrations. Signed on front paste-down by Ashley Montagu; Inscribed on front free endpaper by editor, Marilyn Fayre Milos: 28 May 1997/ To Ashley Montagu, With thanks for being the first person to publically honor my work in defense of infants & children. In return, we honor your life and work with the Ashley Montagu resolution to end the genital mutilation of children worldwide, which passed unanimously by the General Assembly of the Fourth International Symposium on Sexual Mutilations--the proceedings of which are contianed in this volume./ With Love, Marilyn Milos. PREFACE: Sexual mutilation is a global problem that affects 15.3 million children and young adults annually. In terms of gender, 13.3 million boys and 2 million girls are involuntarily subjected to sexual mutilation every year. While it is tempting to quantify and compare the amount of tissue removed from either gender, no ethical justification can be made for removing any amount of flesh from the body of another person. The violation of human rights implicit in sexual mutilation is identical for any gender. The violation occurs with the first cut into another person's body. MARILYN FAYRE MILOS (born March 22, 1940) is the founder and director of the National Organization of Circumcision Information Resource Centers (NOCIRC), a genital integrity organization which opposes the genital modification of children. Doctors Opposing Circumcision is a non-profit, all-volunteer organization founded in 1995 by GEORGE C. DENNISTON, MD, MPH, a physician and professor of family medicine. ASHLEY MONTAGU (1905 – 1999), previously known as Israel Ehrenberg, was a British-American anthropologist who popularized the study of topics such as race and gender and their relation to politics and development. He was the rapporteur, in 1950, for the UNESCO statement The Race Question. After relocating to the United States he became a naturalized American citizen in 1940, taught and lectured at Harvard, Princeton, Rutgers, the University of California, Santa Barbara, and New York University. He authored over sixty books throughout this lifetime. In 1995, the American Humanist Association named him the Humanist of the Year. Later in life, Montagu actively opposed genital modification and mutilation of children. In 1994, James Prescott, Ph.D., wrote the Ashley Montagu Resolution to End the Genital Mutilation of Children Worldwide: a Petition to the World Court, The Hague, named in honor of Dr. Montagu, who was one of its original signers.

Inscription: Inscribed to Ashley Montagu, with his signature