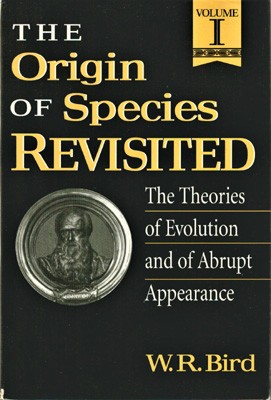 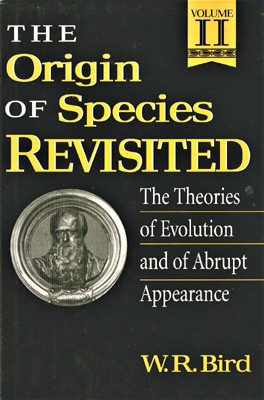 The Origin of Species Revisited. The Theories of Evolution and of Abrupt Appearance

MASSIVE 1,114-PAGE DOCUMENTATION CONTRASTING EVOLUTIONARY THEORY AND ABRUPT APPEARANCE (CREATIONISM). Two volumes, 9 1/4 inches tall hardcover, publisher's black cloth boards, gilt title to spines, xvi, 551 pp; xix, 563 pp; very good in very good dust jackets. FROM DUST JACKET: The Origin of Species Revisited is a comprehensive, thoroughly documented investigation of one of the great ongoing battles of this or any age: Darwin's theory of evolution versus the theory of creation and the theory of abrupt appearance. W. R. Bird, who argued the major case on the issue before the U.S. Supreme Court, presents an in-depth comparison of the two theories, in two volumes containing 2000 quotations and 5,400 footnotes. Volume I assesses scientific claims of the two chief views concerning the origins of the universe. the first life, and plants and animals. It sketches punctuationist, macromutationist, neutral ;electionist, structuralist, and other challenges to orthodox Darwinism, as well as the natural order systematics, transformed cladist, panspermia. discontinuitist, and creationist attacks on macroevolution. Volume II compares the scientific, non-religious, historical, educational, and constitutional natures of the theory of evolution and the theory of abrupt appearance. It discusses the definitions of science and religion and their applcability to theories of origins, the educational rationale for alternative explanations and nonindoctrination, and the constitutional requirements of academic freedom md separation of church and state. Mr. Bird's balanced and meticulous scholarship has received the praise of evolutionists and non-evolutionists alike. W. R. BIRD is an Atlanta attorney and Yale Law School graduate who has researched the issue of origins for years and who argued the major case on the issue before the U.S. Supreme Court. He is a member of the most prestigious legal organization, the American Law Institute, is an adjunct professor at a major law school (teaching its constitutional law course on church and state issues), and has published articles on this issue in the Yale Law Journal and the Harvard Journal of Law & Public Policy. The author is listed in the most selective directory, Who's Who in the World, as well as in Who's Who in the South and Southwest and Who's Who in American Law. In his student days, he received Yale's prize for one of the best two student publications and was the first student to exempt the freshman year at Vanderbilt (where he graduated summa cum laude).

Title: The Origin of Species Revisited. The Theories of Evolution and of Abrupt Appearance

The Origin of Species Revisited. The Theories of Evolution and of Abrupt Appearance