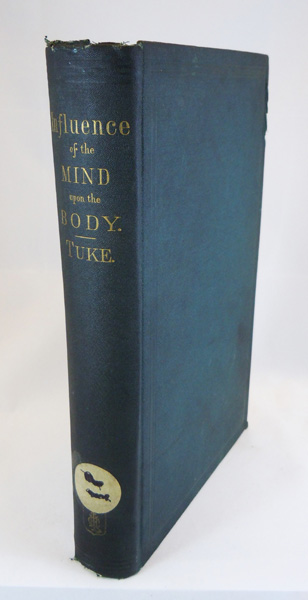 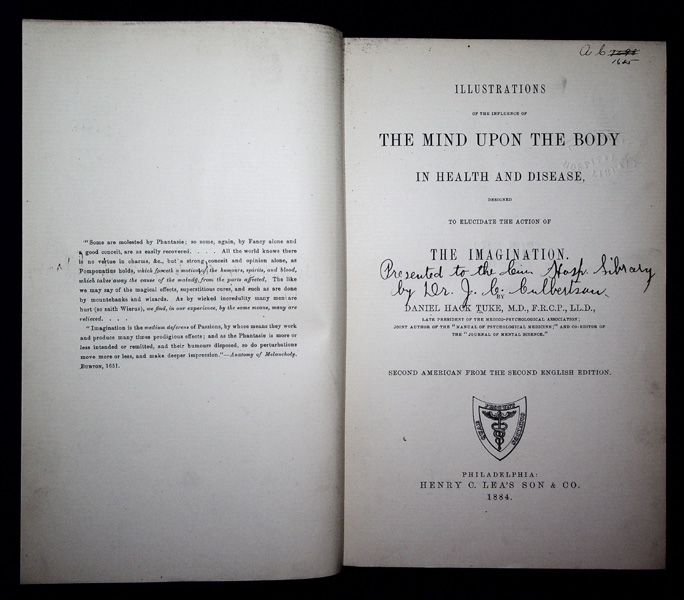 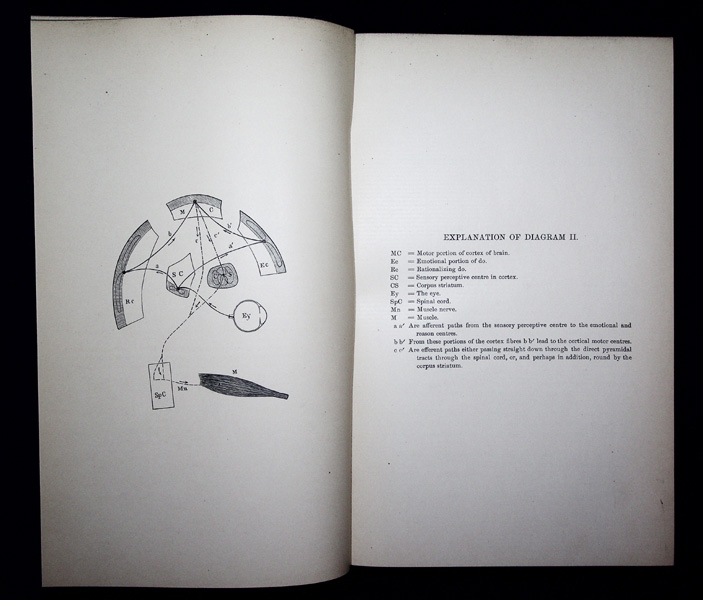 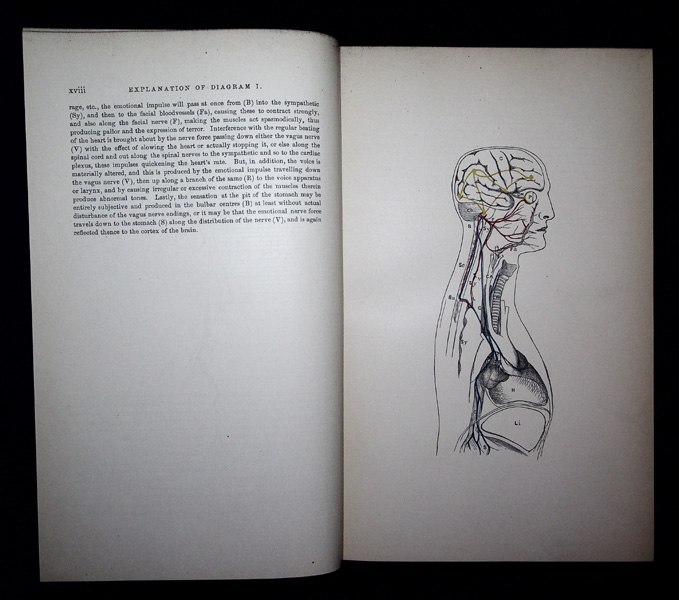 19TH CENTURY MONOGRAPH ON THE MIND-BODY CONNECTION IN DISEASE, COPY OF PHYSICIAN MEDICAL PUBLISHER. 9 1/2 inches tall hardcover, original green cloth boards, xvi, 482 pages, ink inscription on title page, 'Presented to the Cin. Hosp. Library by Dr. J. C. Culbertson,' with embossed stamp of Cincinnati Hospital Library. Two plates (1 colored) showing neural pathways, publisher's catalogue at rear. Corners and edge rubbed, spine dulled, ex-institutional library, overall very good. FROM PREFACE TO THE FIRST EDITION: 'The objects of the following pages may be thus stated: 1. To collect together in one volume authentic Illustrations of the influence of the Mind upon the Body, scattered through various Medical and other works, however familiar to many these cases may be supp]e merited by those falling within my own knowledge. 2. To give these cases fresh interest and value by arranging them on a definite physiological basis. 3. To show the power and extent of this influence not only in health in causing Disorders of Sensation, Motion, and the Organic Functions, but also its importance as a practical remedy in disease. 4 To ascertain as far as possible the channels through, and the mode by, which this influence is exerted. 5. To elucidate by this inquiry, the nature and action of what is usually understood as the Imagination. There are two classes of readers to whom I wish more especially to address myself. The medical reader, who I hope may be induced to employ Psycho-therapeutics in a more methodical way than heretofore, and thus copy Nature in those interesting instances, occasionally occur- ring, of sudden recovery from the spontaneous action of some powerful moral cause, by employing the same force designedly, instead of leaving to mere chance. ... The other class comprises those non-medical readers who may happen to peruse this work; and these, the author hopes, may be disposed to regard in a different light from what they may heretofore have done, the success of some of the fashionable modes of treatment current at the Present day.' FROM PREFACE TO THE SECOND EDITION: 'Since the former edition of this work there has been a remarkable increase in the amount of intelligent interest felt in the more subtle relations existing between Mind and Body, and, happily, physicians acknowledged position have devoted their attention to the study of psychical phenomena too often neglected even by those whose special province it is to determine their nature, and to enlighten the public mind as to what is real on the one hand, and what is either fancy or fraud on the other. The author feels that he cannot too strongly emphasize the position taken by him in this work, namely, that he only aspires to lay down and illustrate certain psycho-physical principles which appear clearly recog- nizable in the light of modern physiology.' CONTENTS: THE INTELLECT; THE EMOTIONS; VOLITION; INFLUENCE OF THE MIND UPON THE BODY IN THE CURE OF DISEASE. DANIEL HACK TUKE (1827-1895) was an English specialist in mental illness. He was the descendant of a long line of Quakers interested in mental illness: his great-grandfather, grandfather, father, and older brother managed the York Retreat, an institution that revolutionized treatment of the insane by introducing humane therapies. DR. J. C. CULBERTSON was publisher of The Cincinnati Lancet-Clinic, a weekly American medical journal published from 1878 to 1916.

Title: Illustrations of the influence of the Mind Upon the Body in Health and Disease designed to Elucidate the Action of the Imagination