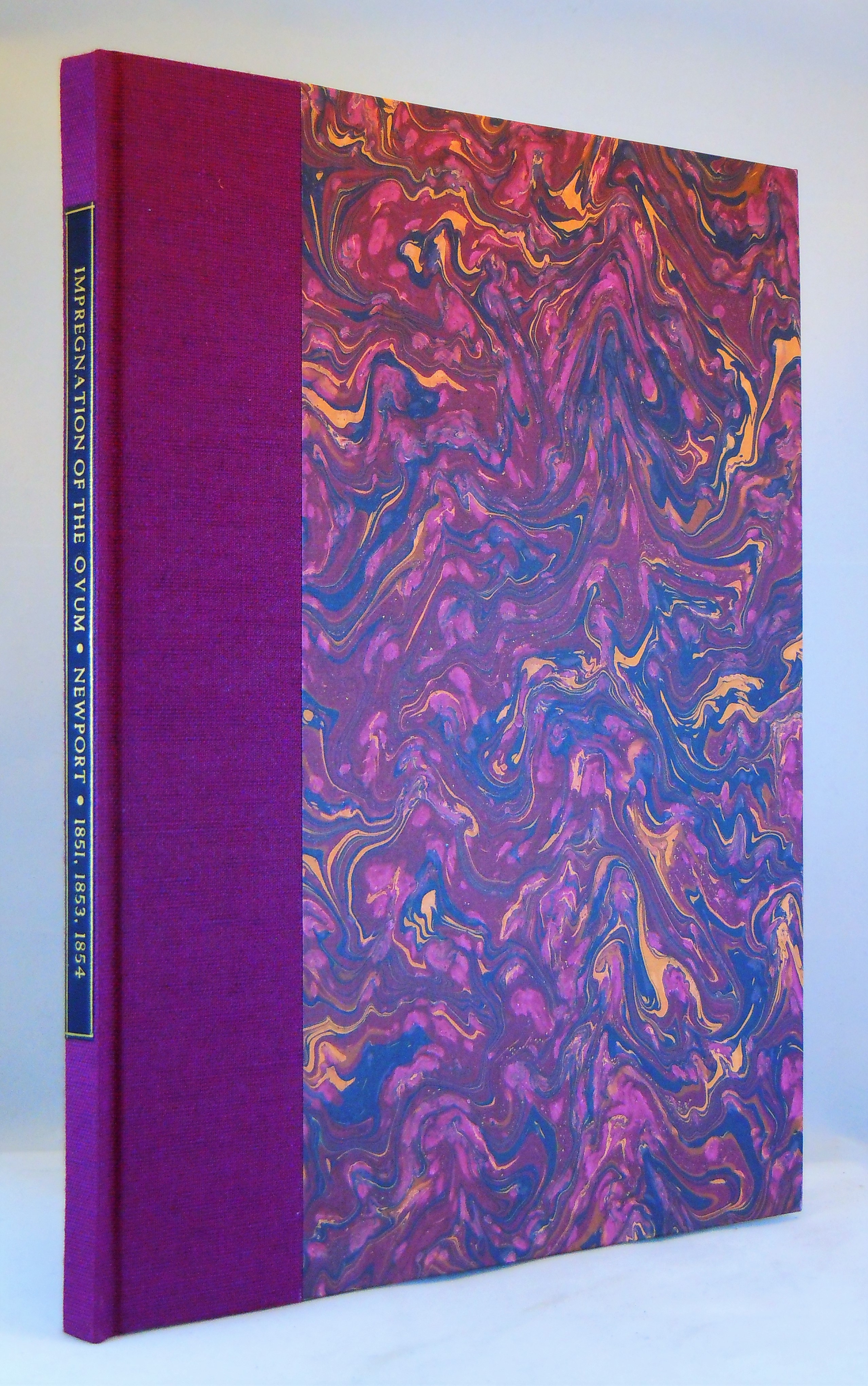 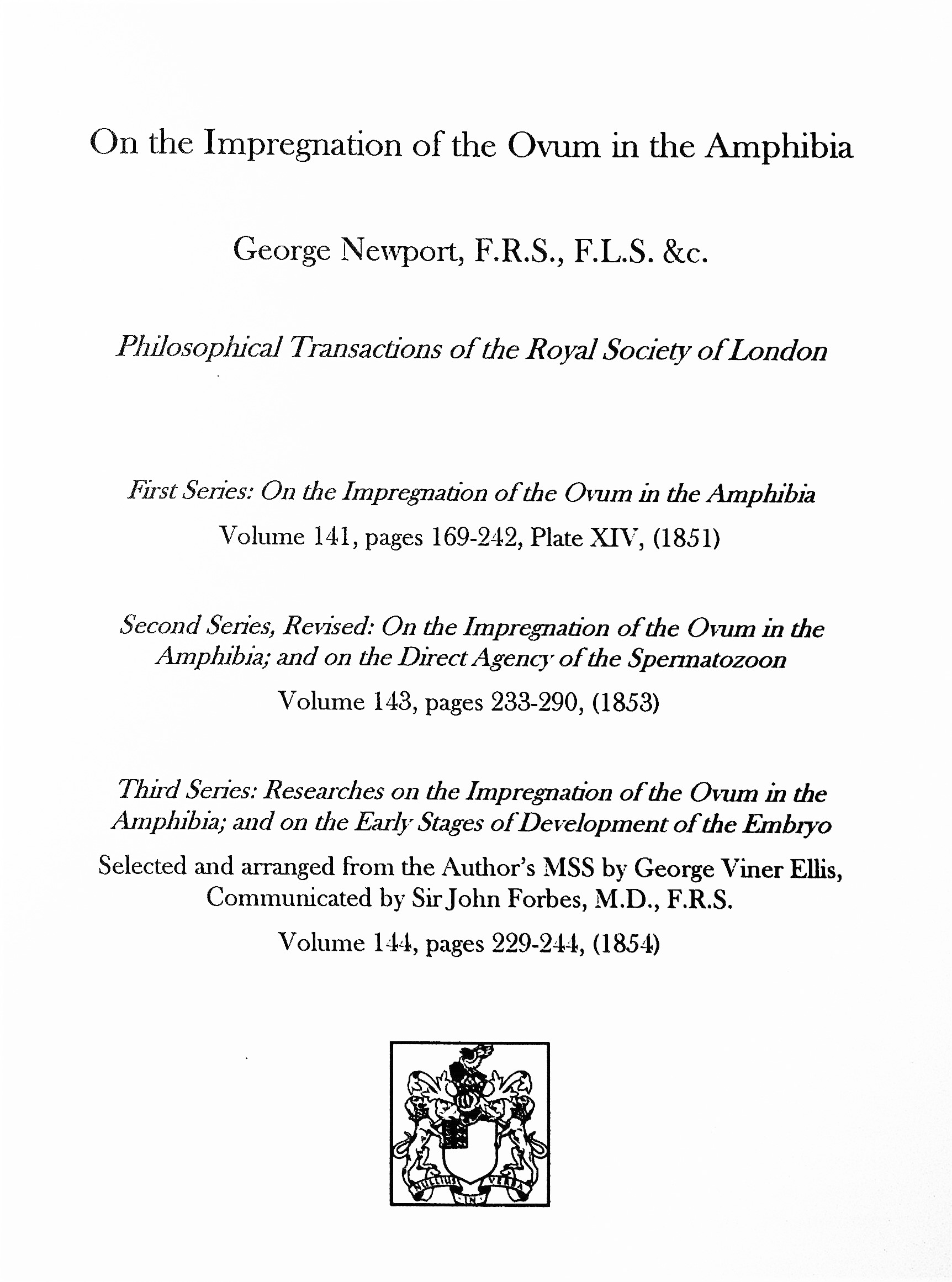 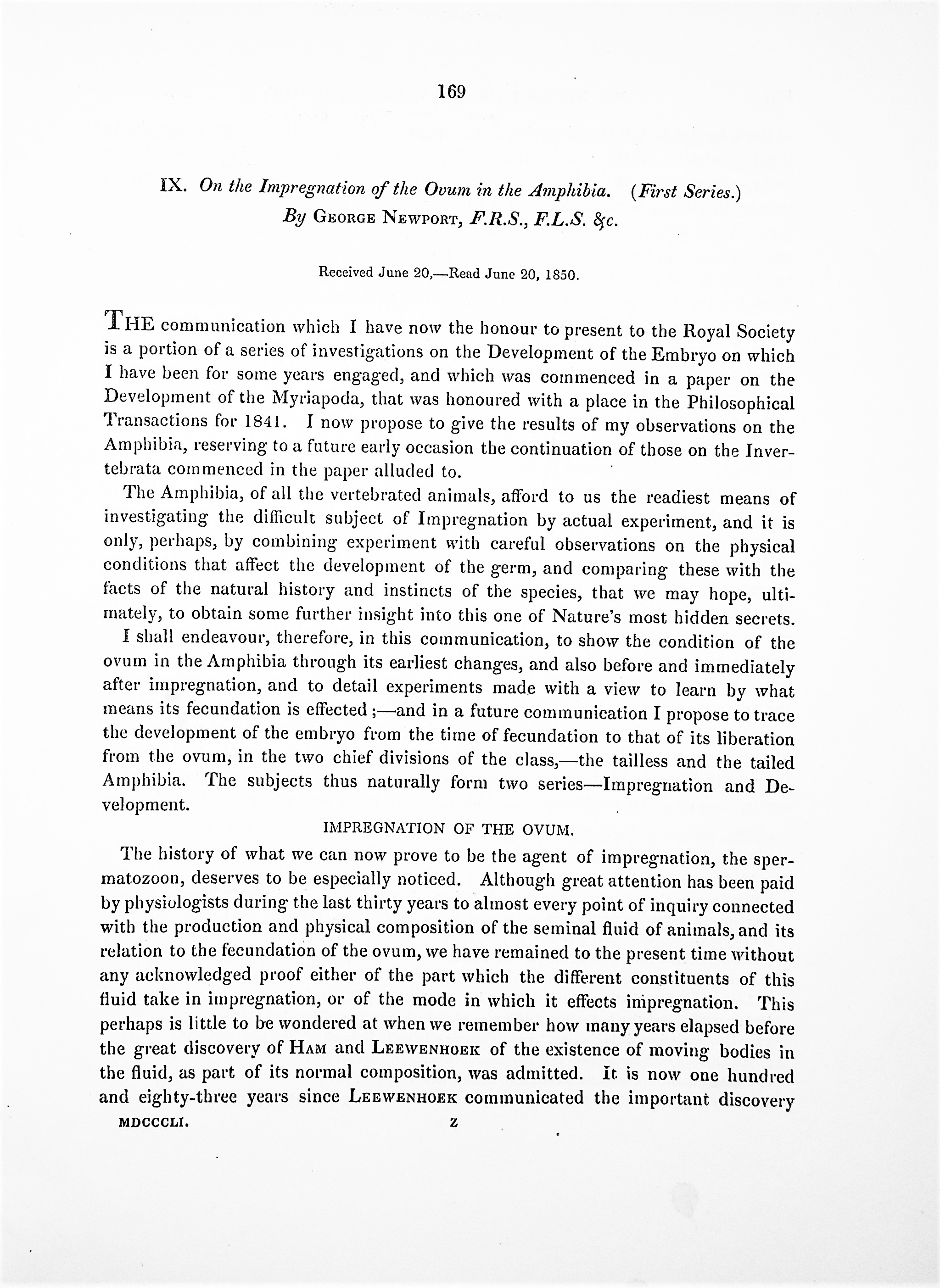 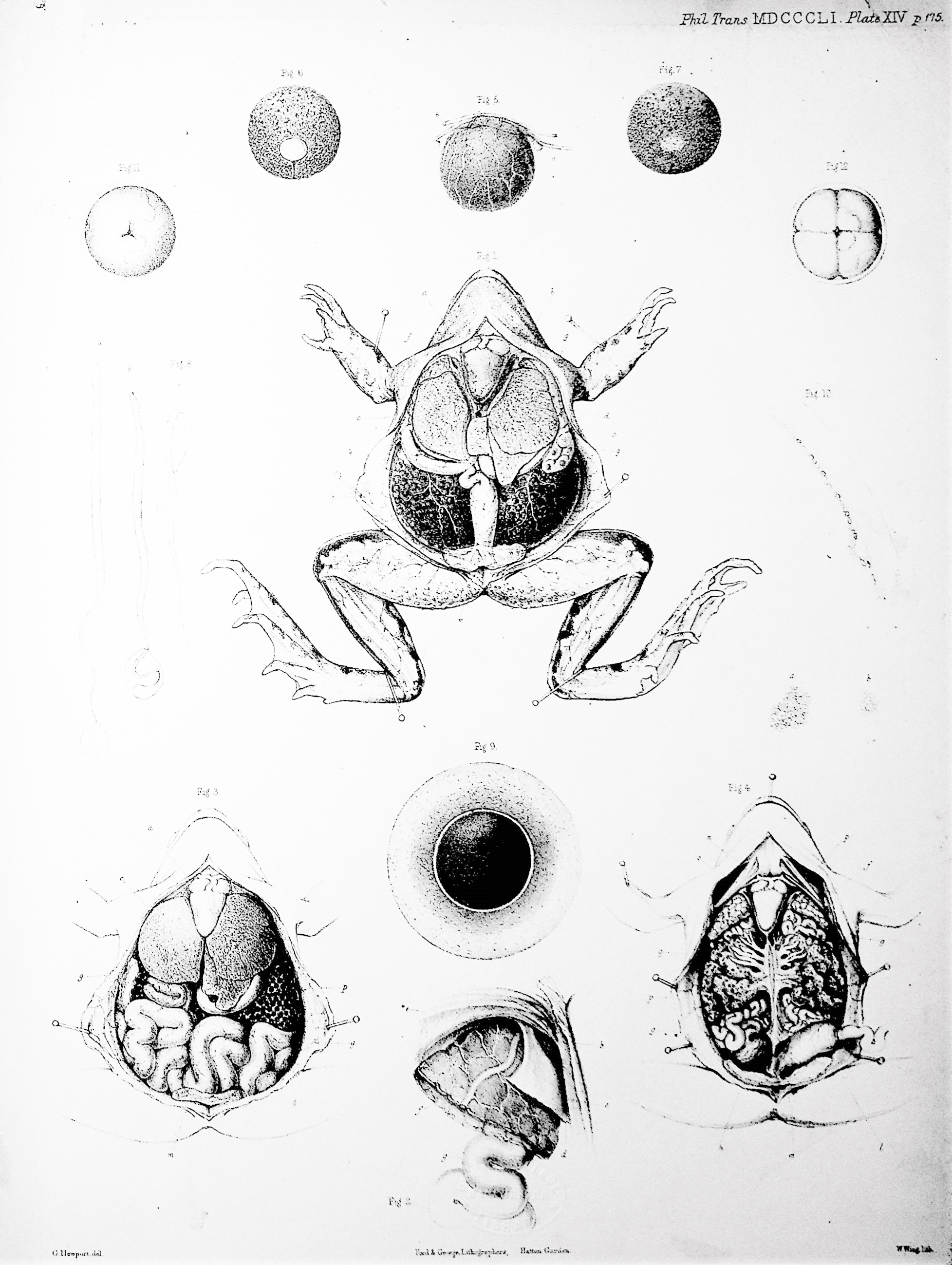 FIRST EDITION OF LANDMARK PAPERS DEMONSTRATING THE PROCESS OF FERTILIZATION OF THE VERTEBRATE EGG, AND EARLY EMBRYOGENESIS. 12 inches tall hardcover, recent 1/2 maroon cloth binding, marbled paper covers, gilt leather label to spine, new endpapers, list of sources of papers followed by bound extracts from 3 issues of the Philosophical Transactions of the Royal Society of London: Vol 141, pp 169-242, Plate XIV (1851), Vol. 143, pp 233-290 (1853), Vol. 144, pp 229-244 (1854). Binding fine, text pages unmarked, plate margins darkened, small college library embossed stamp to bottom of plate, very good in custom archival mylar cover. GEORGE NEWPORT (1803-1854) Newport held the post of house surgeon to the Chichester Infirmary until January 1837, when he established himself in practice gradually declined; and when in 1847 he was awarded a pension from the civil list of £100 per annum for his contributions to natural history, he was able to devote all his time to research. His extensive researches were rewarded with several honors. On 11 December 1843 he was elected a fellow of the Royal College of Surgeons of England, of which he was one of the original 300 fellows, and from 1844 to 1845 he was president of the Entomological Society. On 26 March 1846 he became a fellow of the Royal Society, and at the time of his death he was a Member of Council. Newport's contributions to biology lay mostly within the field of entomology and the embryology of the Insecta and Amphibia. Newport's most outstanding contribution to biology was his discovery that during fertilization in higher animals impregnation of the ovum by the spermatozoon is by penetration and not just by contact as previously thought. For his work on the frog (1851) he was awarded the Royal Medal of the Royal Society. He was also the first to observe the coincidence between the first plane of cleavage in the egg made by the spermatozoon at its place of entry and the median plane of the body of the embryo and thus of the adult body (1854). CITED BY GABRIEL AND FOGEL, Great Experiments in Biology (1955): "Although Leeuwenhoek had held that fertilization was accomplished by entry of a sperm cell into the egg, this assertion was unsupported by observation. The question of sperm entrance therefore remained a hotly contested matter until the middle of the nineteenth century. Of a number of reports which describe sperm entrance in various organisms, the account of Newport appears to be the most reliable." CITED BY MAIENSCHEIN, Whose View of Life? (2003): "More empirical evidence about eggs quickly showed that the egg provides material continuity between the mother and offspring. But what does the male contribute? Aristotle had realized that both parents must participate in the making of offspring. Yet the egg comes only from the mother. What is the role of those spermatozoa that Leeuwenhoek had first seen? Fortunately, improved microscopic techniques and equipment helped once again. By the 1840s, researchers had observed the presence of sperm within the egg after fertilization. Pursuing the hypothesis that it is sperm that fertilize eggs and actually initiate individual development, several researchers had already discovered through experimentation that eggs with no exposure to sperm do not develop and differentiate. Yet, even showing that sperm must be present or seeing that they occasionally are there does not reveal much about what they actually do. Generally, researchers interpreted the sperm as providing a stimulus that, in effect, excited the egg to begin developing. The sperm must act as a physical, or perhaps a chemical, prod to action. George Newport's observations proved particularly compelling, described the spermatozoa's passing through the gelatinous coating and the vitelline membrane that surrounds the frog's eggs and into the yolk."