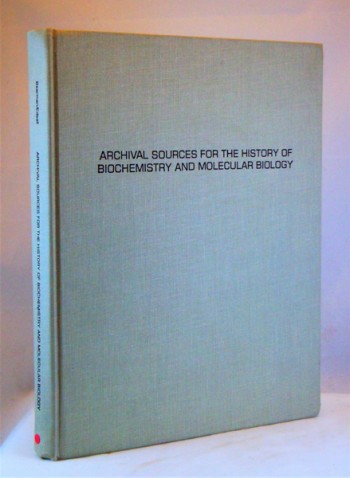 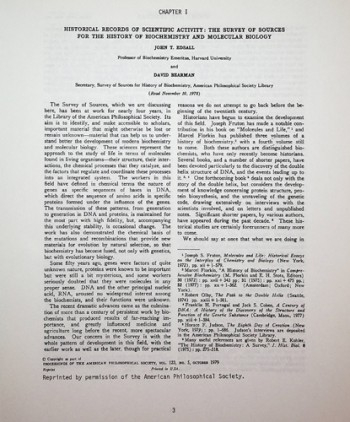 Archival Sources for the History of Biochemistry and Molecular Biology. A Reference Guide and Report

1980 REPORT ON ARCHIVAL SOURCES FOR HISTORY OF BIOCHEMISTRY AND MOLECULAR BIOLOGY HEADED BY PIONEER PROTEIN CHEMIST AND SCIENCE ACTIVIST. 10 1/2 inches tall hardcover, gray cloth binding, title to cover and spine, signed by Edsall on front free endpaper, xii, 338 pp, unmarked, very good. FROM PREFACE: The development of biochemistry and molecular biology is a central event in the intellectual history of our time. Its roots go back to Lavoisier and before, but its greatest development has occurred in the last fifty and especially the last thirty years. The demonstration of the biochemical basis of heredity and the universality of the genetic code; the detailed working out of the structure of proteins, with its far reaching implications for their functions as enzymes; the beginning of understanding of mechanisms for biochemical regulation and control, in development and metabolism of these discoveries, and others in modern biology, represent an advance in the understanding of life and its processes that is comparable in significance to the great advances in quantum physics and chemistry in the early twentieth century. Further great advances are proceeding now. These immense developments have begun to raise important philosophical and ethical questions.--John T. Edsall, 1979. JOHN TILESTON EDSALL (1902-2002) was an early protein scientist, who contributed significantly to the understanding of the hydrophobic interaction. Born in Philadelphia, John Edsall moved to Boston with his family at the age of 10. He graduated from Harvard University with a degree in chemistry. At Harvard he was a good friend of the physicist Robert Oppenheimer. Edsall worked with Edwin Cohn during World War II to apply protein methods to blood fractionation. In addition to work on muscle proteins, Edsall and his colleagues in the Department of Physical Chemistry, including Jeffries Wyman, began systematically to study the physical and solution properties of amino acids and small peptides. One of Edsall's contributions was the description of an amino acid as a dipolar ion. Among Edsall's many roles was that of a vigorous advocate for freedom of scientific inquiry as well as the responsible conduct of research and usage of applied science. Edsall played an important role also in the establishment of the Committee on Scientific Freedom and Responsibility (CSFR) of the American Association for Advancement of Science (AAAS). His article published in Science in 1975 â€œScientific Freedom and Responsibilityâ€ is a seminal statement of issues confronting scientists and citizens that is still relevant. Throughout his long career, Edsall continued to be an informed, articulate, and effective voice of concern regarding nuclear, biological, and chemical agents for war, environmental degradation, and the relationship of technology to society.

Title: Archival Sources for the History of Biochemistry and Molecular Biology. A Reference Guide and Report

Publisher: Boston and Philadelphia, American Academy of Arts and Sciences and the American Philosophical Society: 1980

Archival Sources for the History of Biochemistry and Molecular Biology. A Reference Guide and Report