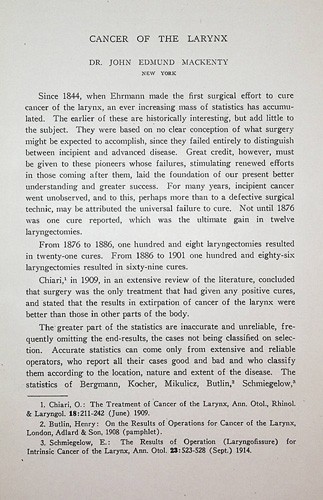 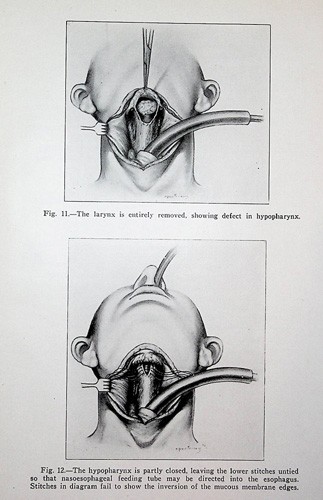 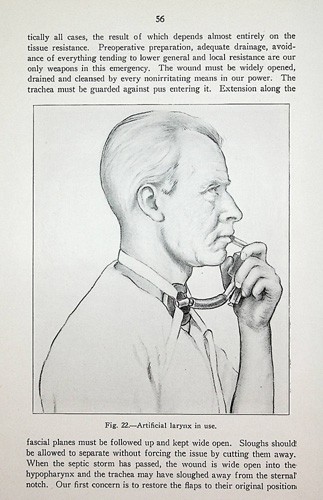 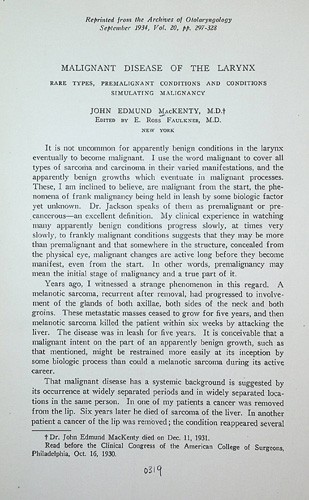 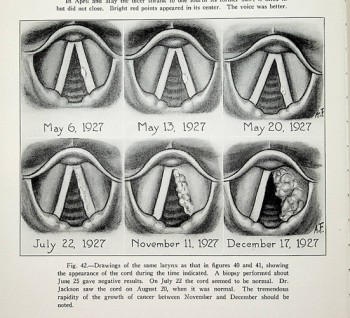 1926-1934 TWO REVIEW PAPERS ON LARYNGECTOMY BY NEW YORK SURGEON TOGETHER WITH COMMEMORATIVE VOLUME BY HIS ASSOCIATES--COPY OF FAMILY OF ONE OF HIS PATIENTS WITH PHOTO. Three hardcover volumes, black cloth binding, gilt title to covers. 1. Mackenty, John Edmund. Cancer of the Larynx, offprint Arch. Otolaryngol. 1926 (3) 205-232. Library numbers bottom spine, bookplate and handstamp of institutional library to front paste-down and front endpaper respectively, 63 pp, 25 black & white illustrations. 2. Mackenty, John Edmund. Malignant Disease of the Larynx, offprint Arch. Otolaryngol. 1934 Vol. 20, 297-328. Library numbers bottom spine, no other library marks, 32 pp, 43 black & white illustrations. 3. Transactions of a Commemorative Meeting in Honour of Dr. John Edmund Mackenty, held by the Section of Otolaryngology, the New York Academy of Medicine, April 20th, 1932, 50 pp. Inscribed top of front free endpaper, Dr. 'Mac' - a dear & also friend (and our doctor!!!), embossed name and address lower corner front free endpaper; laid in envelope marked, photo - friends of BJ and CJ before marriage and throughout lifetime & children after that containing 2 3/4 x 4 1/2 inch photo with inscription verso, Burges Johnson & Dr. John MacKenty, taken at Bareaks Port Washington/ Closest family friends even before marriage & throughout their lives; CONTENTS: Historical sketch of the operation of thyrotomy and laryngectomy by D. Bryson Delavan; Outstanding points in laryngectomy as developed by MacKenty and some of the other ideas relating to this operation by Fielding O. Lewis; Atresia of the pharynx and other plastic operations developed by MacKenty by E. Ross Faulkner; My experience with the use of artificial larynx by Joseph L. Buttenwieser; The early diagnosis of cancer of the larynx by Cornelius G. Coakley; The cancer problem as related to laryngology by Dr. Harrison S. Martland; Closing remarks by Charles J. Imperatori. JOHN EDMUND MACKENTY (1869-1931) Although celebrated as a New York surgeon he was a Canadian by birth, having graduated at McGill University, Montreal, in 1892. After a few years in Boston, with Dr. Cabot, and some post-graduate work in Europe, he settled in New York in 1899. There, for thirty years, he was identified with the large Manhattan Ear and Throat Hospital, where most of his well-known work on cancer of the larynx was carried out. His great experience in laryngectomy gave him an enviable reputation in this special procedure, which he shared with such European workers as Gluck, Soerensen and Tapia. At one time he reported 31 laryngectomies without a death later on, he put on record 102 laryngectomies with four deaths, all these being in diabetic subjects. His follow-up results were also remarkable. Between 1917 and 1922, 31 laryngectomies gave five recurrences; from 1922 to 1926,58 laryngectomies gave five recurrences. Both these records illustrate the well-established fact that, with experience, improvement increases both in the selection of cases and in operative skill.