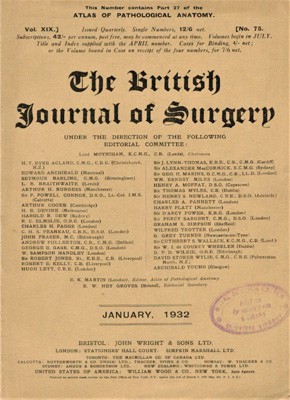 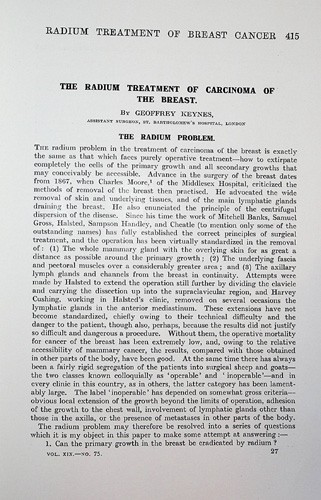 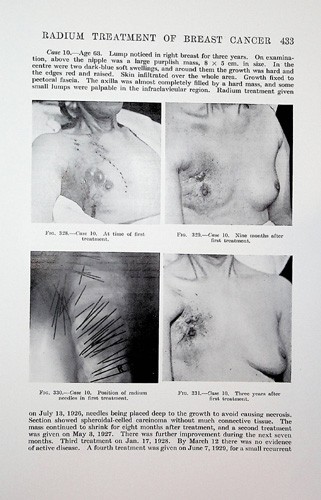 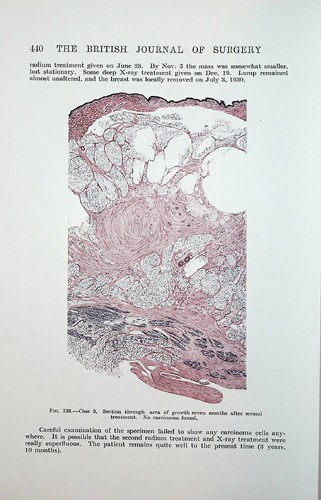 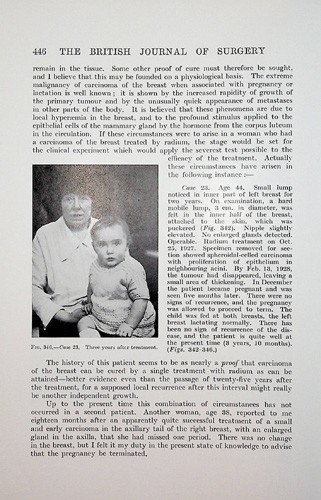 The Radium Treatment of Carcinoma of the Breast in The British Journal of Surgery, January, 1932

1932 FIRST EDITION OF LANDMARK PUBLICATION OF SUCCESSFUL RADIATION THERAPY FOR BREAST CANCER 50 YEARS BEFORE ITS GENERAL ACCEPTANCE. 10 inches tall entire journal issue in gray printed paper covers, pages 415-480, black & white and color figures 312-359, table Analysis of 171 cases of cancer of the breast treated by radium. Corners worn, top of spine frayed, institutional library stamp to cover, pages unmarked, very good. Garrison-Morton No. 5786. Keynes's successes with radium in breast cancer established this method of conservative treatment. SIR GEOFFREY LANGDON KEYNES (1887-1982) was an English surgeon and author. He began his career as a medic in World War I, before becoming a doctor at St. Bartholomew's Hospital in London, where he made notable innovations in the fields of blood transfusion and breast cancer surgery. Keynes began working full-time at St. Bartholomew's Hospital in London, where he worked under George Gask and Sir Thomas Dunhill, after returning from World War I. Keynes used his influence as an assistant surgeon to advocate for limited surgery instead of the invasive radical mastectomy. Frustrated with the mortality rate and gruesomeness of the radical mastectomy, Keynes experimented by inserting fifty milligrams of radium in a patient's tumor. He later observed that, The ulcer rapidly healed ... and the whole mass became smaller, softer and less fixed. Keynes pursued his new idea through a number of trials, observing the effectiveness of injecting radium chloride into breast cancer tumors compared with the effectiveness of the radical mastectomy. The promising results of these trials led Keynes to be cautiously optimistic, writing in 1927 that the extension of [an] operation beyond a local removal might sometimes be unnecessary. Keynes' outlook was considered a radical break from the medical consensus at the time. Keynes wrote in his autobiography that his work with radium was regarded with some interest by American surgeons, but that the concept of a limited mastectomy failed to gain significant traction in the medical community at the time. His doubts regarding the radical mastectomy were vindicated some fifty years later, when innovators like Bernard Fisher and others revisited his data and pursued what became known as a lumpectomy. Limited surgeries, like the lumpectomy, accompanied by radiation are now the status quo in breast cancer treatment.

Title: The Radium Treatment of Carcinoma of the Breast in The British Journal of Surgery, January, 1932

The Radium Treatment of Carcinoma of the Breast in The British Journal of Surgery, January, 1932