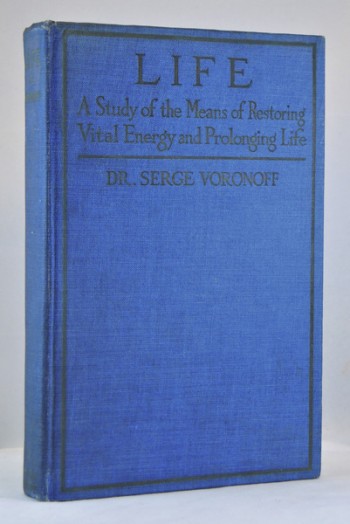 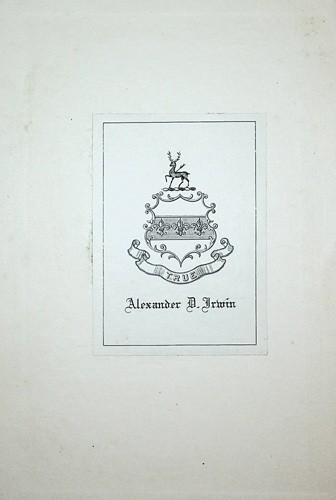 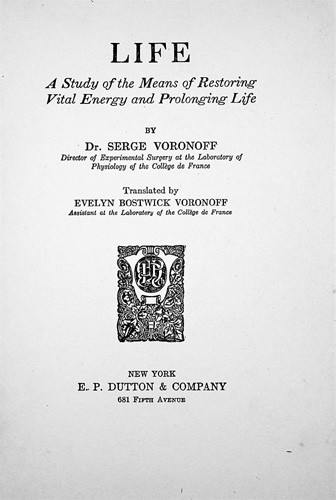 Life. A Study of the Means of Restoring Vital Energy and Prolonging Life

1920 THE SCIENCE BEHIND VORONOFF'S FAMOUS MONKEY GLAND TRANSPLANT PROCEDURE FOR PROLONGING LIFE. 8 1/4 inches tall hardcover, publisher's blue cloth binding, printed title to cover and spine, armorial bookplate of previous owner to front paste-down, xx, 160 pp, 39 figures (including full page black & white plates). Light edgewear to covers, 2 small spots to back cover, binding tight, pages unmarked, very good. FROM TRANSLATOR'S PREFACE: In this translation of my husband's Vivre, I Ã ave endeavored to present in English faithfully and accurately, the profound creative thought of his scientific discoveries for restoring our vital energy and prolonging the life dear to all of us, voiced with such, sincerity and eloquence in his original. ... It describes the processes of renewal of the worn-out glandular cogs and wheels of our body in order that its mechanism shall function perfectly at a time when the brain, educated to a point where its potentialities of useful creative work are at their maximum, undergoes a decay of physical stamina threatening its powers with stagnation. ... Dr. Voronof, treading in the footsteps of that great Master in experimental science) Claude Bernard, makes clear that the grafting glands will, in the future, become an everyday procedure, just as bone-grafting grew to be a common-place of surgical practice during the recent war. SERGE VORONOFF (1866 - 1951) was a French surgeon of Russian extraction who gained fame for his technique of grafting monkey testicle tissue on to the testicles of men for purportedly therapeutic purposes while working in France in the 1920s and 1930s. His work was ridiculed by the medical establishment. In November 1991, The Lancet, suggested that Voronoff's work be revisited. In particular, since modern medicine has established that the Sertoli cells of the testes constitute a barrier to the immune system, rendering the testes an immunologically privileged site for the transplantation of foreign tissue, the thin slices of monkey testicles Voronoff implanted into the patient's testicles may in theory have survived to produce some benefit. As recently as 2005, Voronoff's work in the 1920s and 1930s was noted for setting the basis for the modern anti-aging strategy of replacing hormones. Such practices are currently advocated by alternative medicine organizations such as the American Academy of Anti-Aging Medicine.

Title: Life. A Study of the Means of Restoring Vital Energy and Prolonging Life

Life. A Study of the Means of Restoring Vital Energy and Prolonging Life