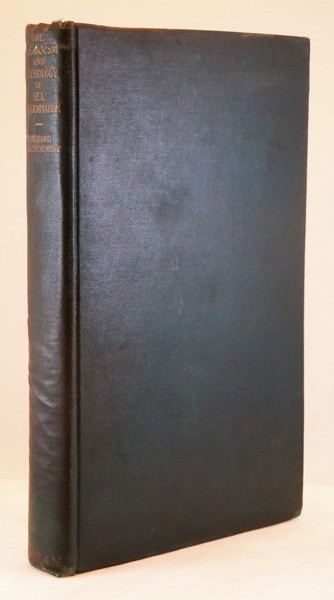 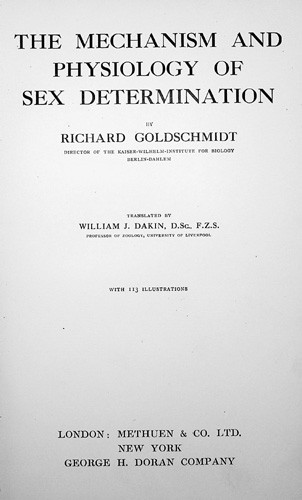 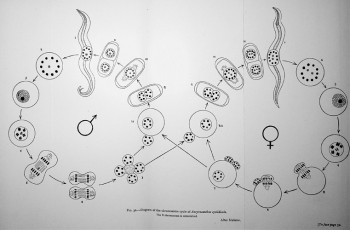 The Mechanism and Physiology of Sex Determination

1923 MONOGRAPH BY BRILLIANT GENETICIST AT THE TIME OF FORMULATION OF THE MODERN SYNTHESIS OF GENETICS AND EVOLUTION. 10 inches tall hardcover, publisher's green cloth binding, gilt title to spine, physician's bookplate to front paste-down, viii, 259 pp, over 100 figures (including fold-out plates). Covers lightly soiled, corners and spine ends bumped, endpapers darkened, page margins darkened, unmarked. Very good-. REVIEW BY JULIAN HUXLEY IN NATURE [Vol. 112, pp 927-930, 29 Dec. 1923] "The earlier rigid belief that sex-determination was entirely a matter of the chromosome-constitution must therefore be modified. Sex, in all higher animals and in some plants, is normally determined by the chromo somes, but (as might have been foreseen) the normal agency can in certain circumtances be overridden. It is clear that, with the point of view arising from these facts, much that is both new and important has been gained. ... Goldschmidt's idea of different rates of production of substances in the embryo is in itself very fruitful, while if his correlation of the rate of production of the sub stance with the amount of some initial fermentcon tained in the gene, and this amount with the potency of an allelomorph in a multiple series,-if this is substantiated, we acquire a new outlook into the relation between Mendelian genes and their mode of action in development." RICHARD GOLDSCHMIDT (1878-1958) was a geneticist and evolutionist who attemped to integrate genetics, development, and evolution. He pioneered understanding of reaction norms, genetic assimilation, dynamical genetics, sex determination, and heterochrony. In 1903 Goldschmidt began working as an assistant to Richard Hertwig at the University of Munich, where he continued his work on nematodes and their histology, including studies of the nervous system development of Ascaris and the anatomy of Amphioxus. He founded the histology journal Archiv fur Zellforschung while working in Hertwig's laboratory. Under Hertwig's influence, he also began to take an interest in chromosome behavior and the new field of genetics. In 1909 Goldschmidt became professor at the University of Munich and, inspired by Wilhelm Johannsen's genetics treatise Elemente der exakten Erblichkeitslehre, began to study sex determination and other aspects of the genetics of the gypsy moth. His studies of the gypsy moth, which culminated in his 1934 monograph Lymantria, became the basis for his theory of sex determination, which he developed from 1911 until 1931. Goldschmidt left Munich in 1914 for the position as head of the genetics section of the newly founded Kaiser Wilhelm Institute for Biology. During a field trip to Japan in 1914 he was not able to return to Germany due to the outbreak of the First World War and got stranded in the United States. He ended up in an internment camp in Fort Oglethorpe, Georgia for dangerous Germans. After his release in 1918 he returned to Germany in 1919 and worked at the Kaiser Wilhelm Institute. Sensing that it was unsafe for him to remain in Germany he emigrated to the United States 1936, where he became professor at the University of California, Berkeley.

Title: The Mechanism and Physiology of Sex Determination

The Mechanism and Physiology of Sex Determination