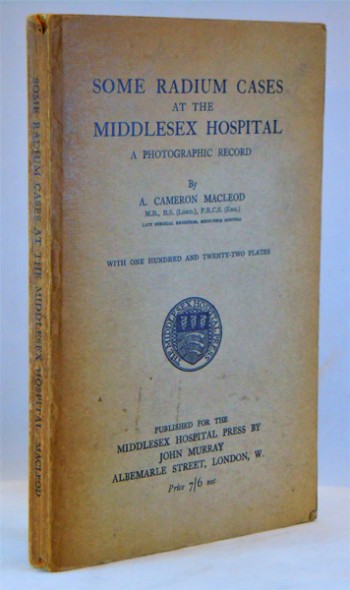 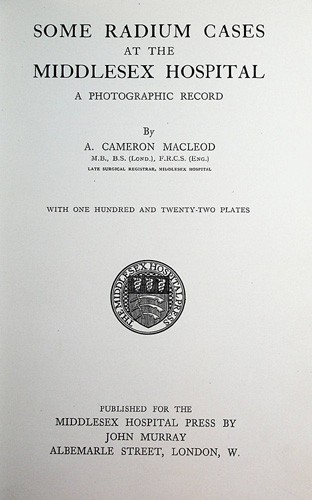 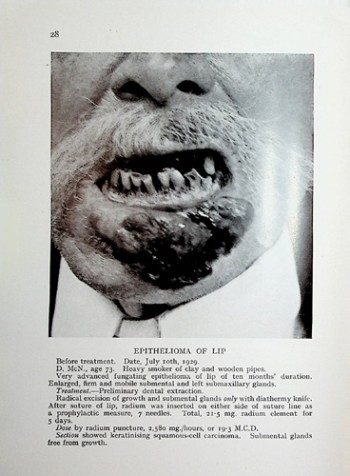 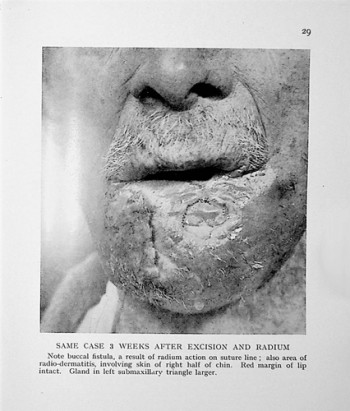 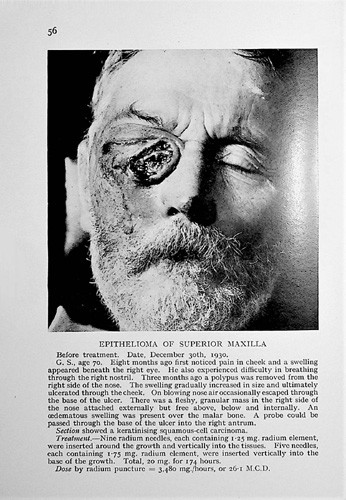 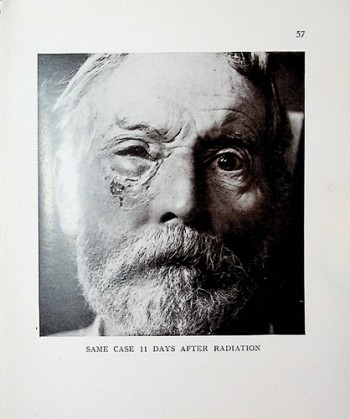 Some Radium Cases at the Middlesex Hospital. A Photographic Record

By: Macleod, A. Cameron

1931 SCARCE PHOTOGRAPHIC RECORD OF THE BEGINNINGS OF RADIATION THERAPY. 8 1/2 inches tall hardcover, printed paper-covered boards, printed title to spine, institutional library bookplate to front paste-down, 154 pp, over 100 black & white photographs of patients' lesions with descriptive text. Very good. FROM THE PREFACE: "Radium now holds an important position in the treatment of many different conditions. Owing to the advent of improved technical methods of radiation, certain types of malignant disease, even when in an early stage, are now being treated with radium in preference to surgery. ... Radiotherapy is in its infancy, and the methods now employed for its application may be substantially altered as research and experiment proceed. For these reasons it was thought desirable to publish this series of photographs which illustrate some of the results obtained with radium in the Middlesex Hospital. ... All the illustrations are untouched, and are the work of Mr. Amyas McKenzie, Clinical Photographer to the Hospital. ... The time has not yet come for determining the value of radiation treatment by statistical methods. That this value great there can be no doubt. It is believed that this collection of photographs will convince those who are sceptical, the same time illustrating the limitations of radiotherapy." ALEXANDER CAMERON MACLEOD (1899-1971) was educated at Shrewsbury School and the Middlesex Hospital, where he was house surgeon to Sampson Handley and became surgical registrar. He was then appointed to the staff of Charing Cross Hospital, where he proved an excellent clinician and teacher, becoming senior tutor in surgery and ultimately consulting surgeon. He was consulting surgeon also to Hampstead General Hospital and the Connaught Hospital, Walthamstow. During the second world war he served in the RAMC and attained the rank of Lieutenant-Colonel in the North African campaign.

Title: Some Radium Cases at the Middlesex Hospital. A Photographic Record

Some Radium Cases at the Middlesex Hospital. A Photographic Record