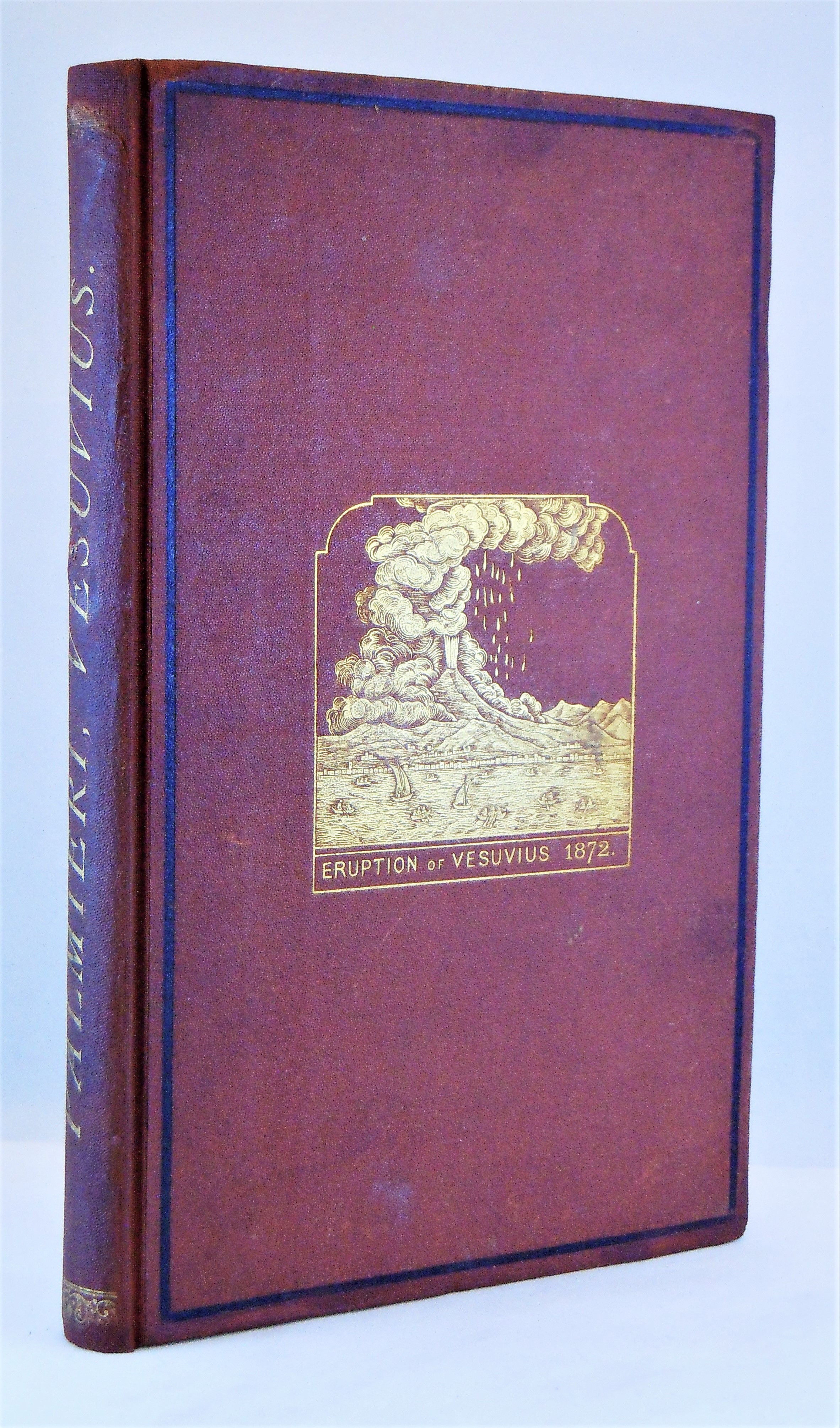 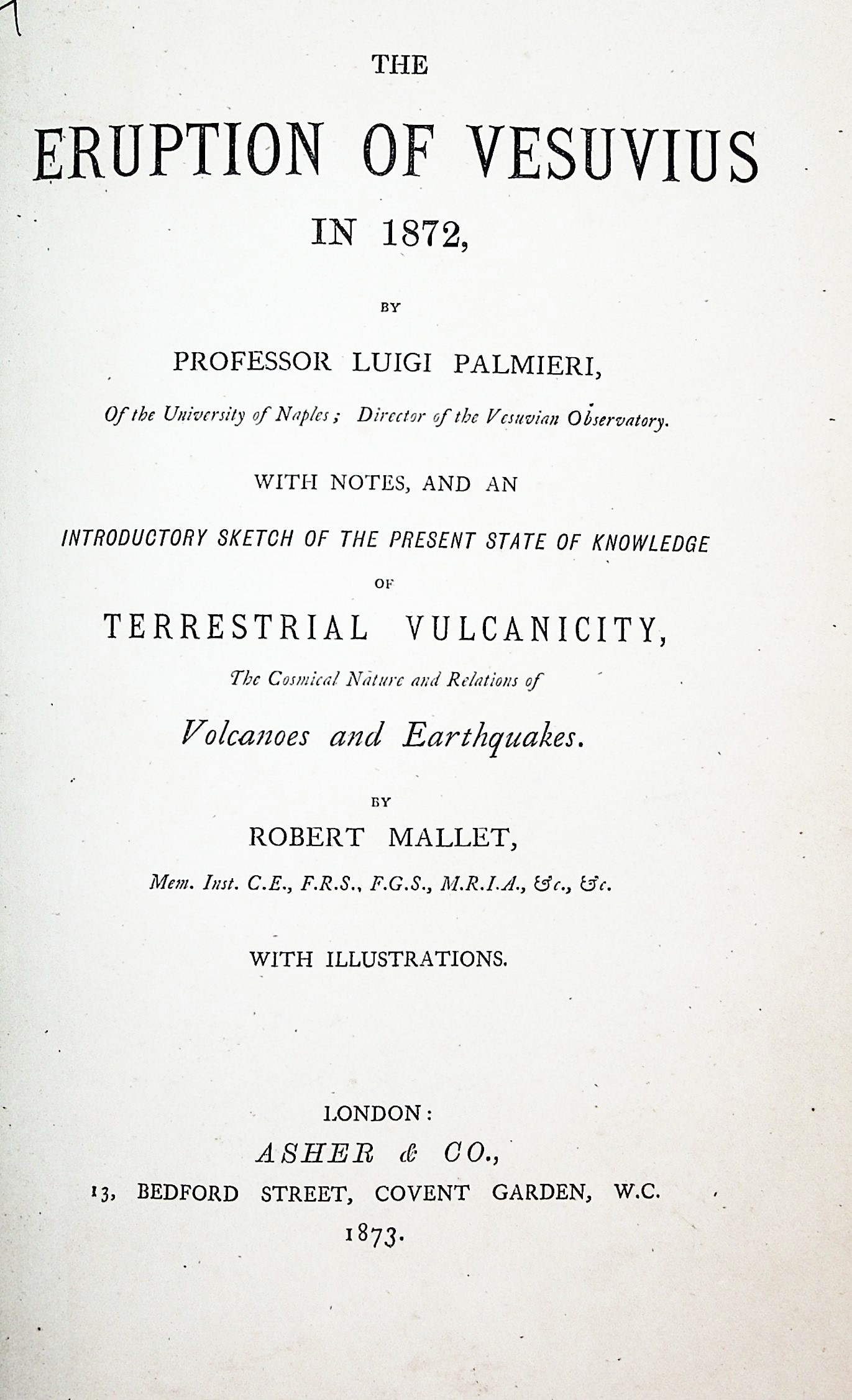 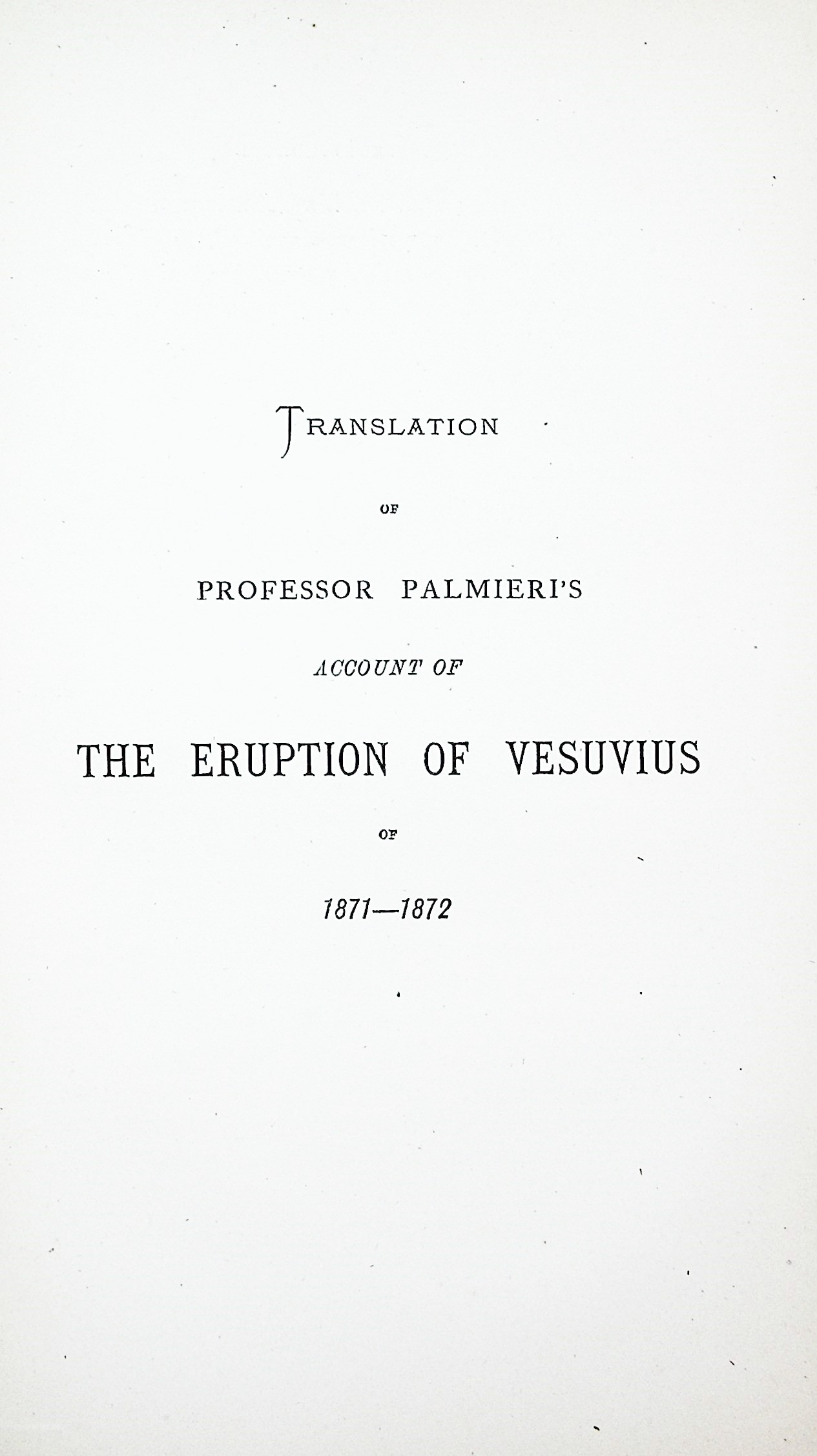 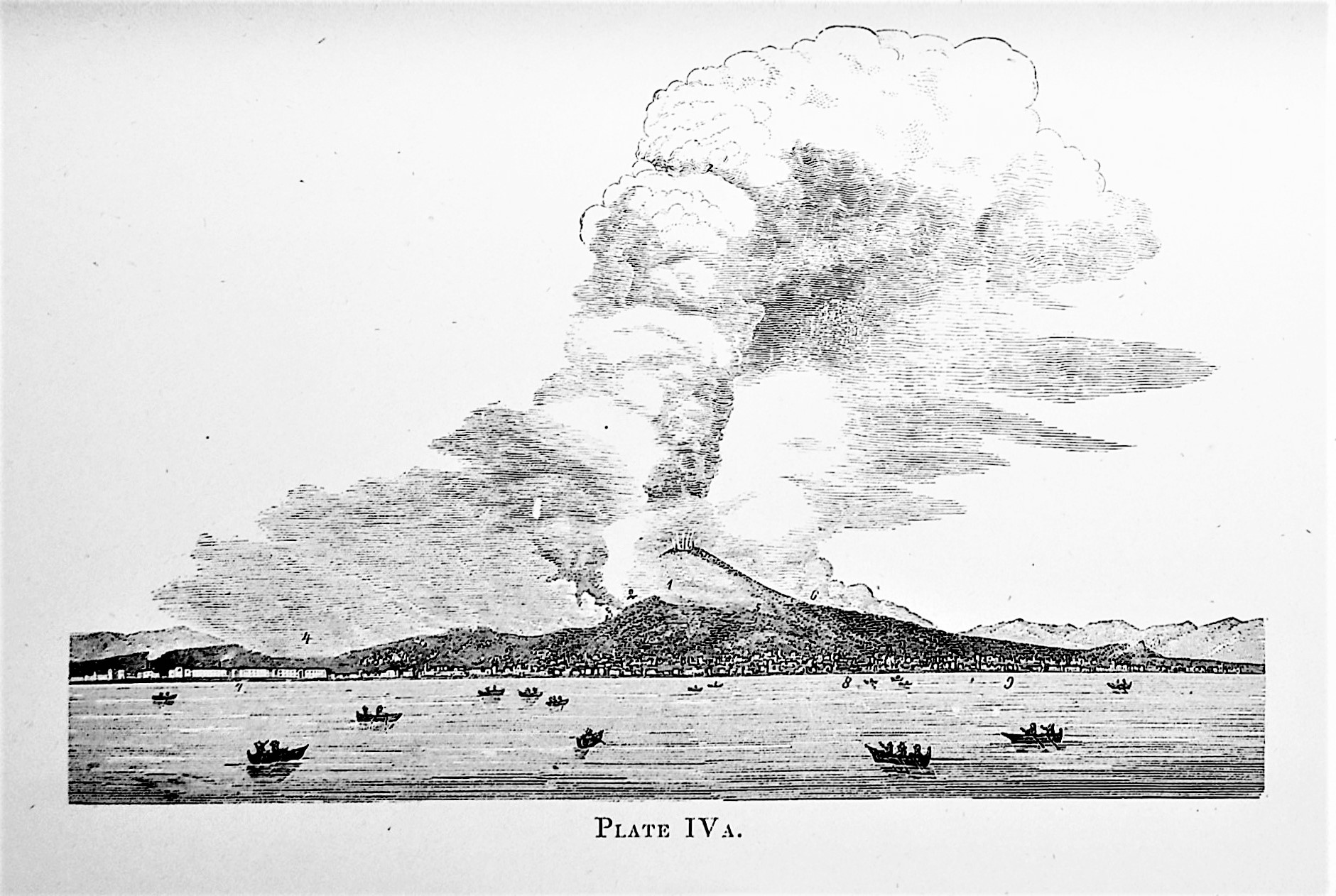 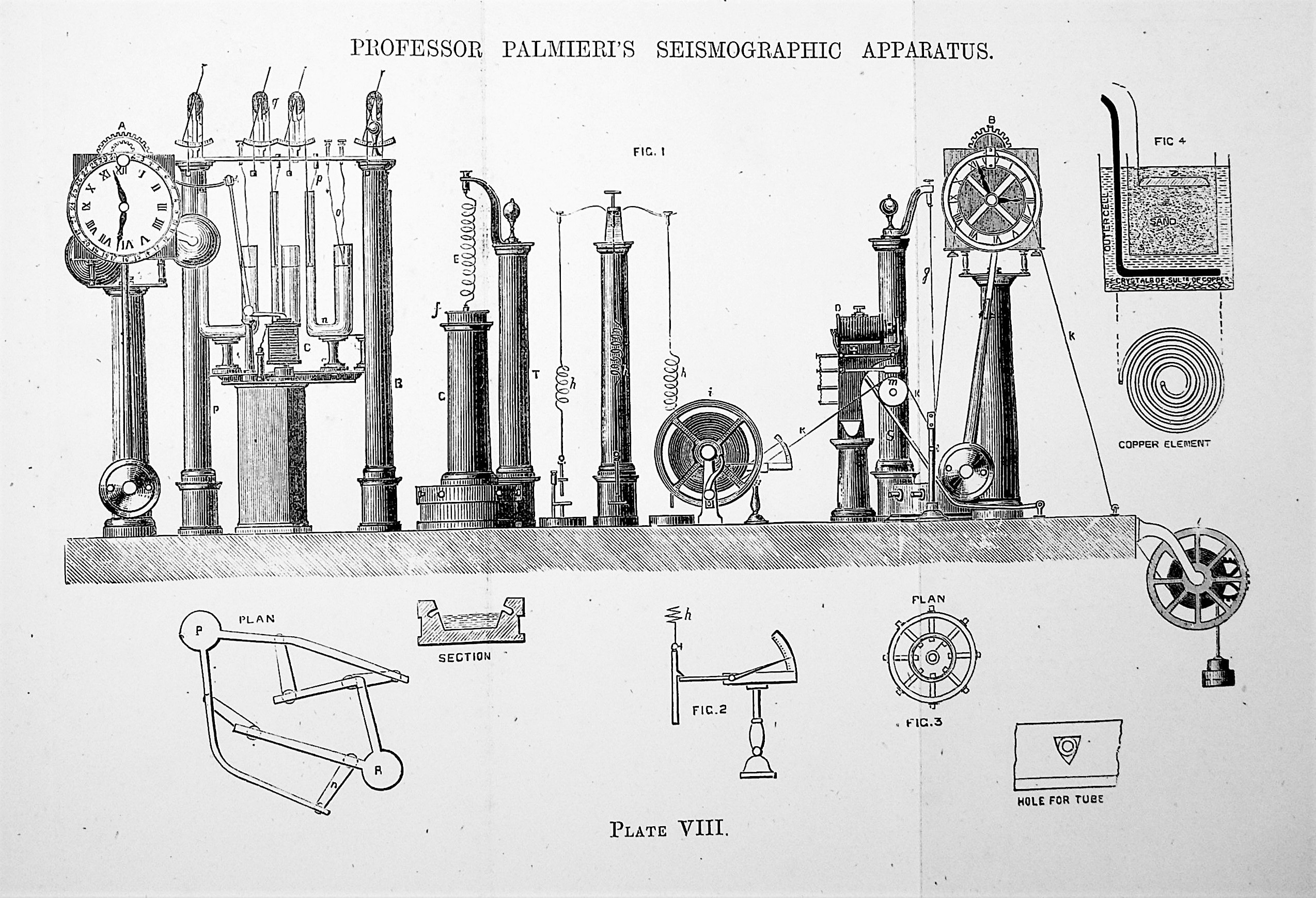 The Eruption of Vesuvius in 1872 by Professor Luigi Palmieri with notes and an Introductory Sketch of the Present State of Knowledge of Terrestrial Vulanicity, the Cosmical Nature and Relations of Volcanoes and Earthquakes by Robert Mallet, with illustrations

By: Palmieri, Luigi and Mallet, Robert

1873 SCARCE ILLUSTRATED REPORT OF HISTORIC ERUPTION OF MT. VESUVIUS IN 1872 BY ITALIAN AND IRISH VUCANOLOGISTS. 10 inches tall hardcover, publisher's red cloth binding, gilt image of Eruption of Vesuvius 1872 to cover, expertly rebacked with original gilt spine conserved, new endpapers, 148 pp, 8 plates (1 folding), binding tight, text and plates crisp and unmarked, very good. REVIEWED IN NATURE [Vol. 7, pp 259-261, 06 February 1873. The Eruption of Vesuvius in 1872 by David Forbes]: "That, in these days of rapid intercourse, the re-appearance of volcanic phenomena on the large scale in any part of the earth's surface should awaken a far more than mere local interest, was well illustrated in the case of the late great outbreak of Mount Vesuvius, during the continuance of which the telegraphic bulletins received from the fiery mountain became the subject of general inquiry and discussion in all parts of the civilised world; and even now that the eruption has entirely subsided, the publication of a translation by Mr. Mallet, of the report of the well-known Italian savant, Professor Palmieri, entitled "Incendio Vesuviano del 26 Aprile, 1872," will be welcomed as a valuable contribution to English scientific literature quite independently of its being a book likely to secure numerous readers amongst the non-scientific public also. LUIGI PALMIERI (1807-1896) was an Italian physicist and meteorologist. He was famous for his scientific studies of the eruptions of Mount Vesuvius, for his researches on earthquakes and meteorological phenomena and for improving the seismograph of the time. Palmieri received a degree in physics from the University of Naples. In 1845, he was made Professor of Physics at the Royal Naval School in Naples and in 1847 was appointed as Chair of Physics at the university. In 1848, he began working at the Vesuvius Observatory and in 1854 was appointed as Director of the Observatory. Using an electromagnetic seismometer for the detection and measurement of ground tremors, Palmieri was able to detect very slight movements in trying to predict volcanic eruptions. Furthermore, he was the first to detect the presence of Helium on Earth on the lava of Mount Vesuvius. ROBERT MALLET (1810-1881) was an Irish geophysicist, civil engineer, and inventor who distinguished himself in research on earthquakes and is sometimes called the father of seismology. Mallet was elected to the Royal Irish Academy in 1832 at the early age of 22. He also enrolled in the British Association for the Advancement of Science in 1835 which helped finance much of his research in seismology. In 1838 he became a life member of the Royal Geological Society of Ireland, and acted as its President from 1846â€“48. On 16 December 1857, the area around Padula, Italy, was devastated by the Great Neapolitan earthquake which caused 11,000 deaths. At the time it was the third largest known earthquake in the world and has been estimated to have been of magnitude 6.9 on the Richter Scale. Mallet, with letters of support from Charles Lyell and Charles Darwin, petitioned the Royal Society of London and received a grant of £150 to go to Padula and record at first hand the devastation. The resulting report was presented to the Royal Society as the Report on the Great Neapolitan Earthquake of 1857. It was a major scientific work and made great use of the then new research tool of photography to record the devastation caused by the earthquake. In 1862, he published the Great Neapolitan Earthquake of 1857: The First Principles of Observational Seismology in two volumes; he brought forward evidence to show that the depth below the Earth's surface, from where the impulse of the Neapolitan earthquake originated, was about 89 geographical miles. One of Mallet's papers was "Volcanic Energy: an Attempt to develop its True Origin and Cosmical Relations," in which he sought to show that volcanic heat may be attributed to the effects of crushing, contortion and other disturbances in the crust of the earth; the disturbances leading to the formation of lines of fracture, more or less vertical, down which water would find its way, and if the temperature generated be sufficient volcanic eruptions of steam or lava would follow.

Title: The Eruption of Vesuvius in 1872 by Professor Luigi Palmieri with notes and an Introductory Sketch of the Present State of Knowledge of Terrestrial Vulanicity, the Cosmical Nature and Relations of Volcanoes and Earthquakes by Robert Mallet, with illustrations

The Eruption of Vesuvius in 1872 by Professor Luigi Palmieri with notes and an Introductory Sketch of the Present State of Knowledge of Terrestrial Vulanicity, the Cosmical Nature and Relations of Volcanoes and Earthquakes by Robert Mallet, with illustrations