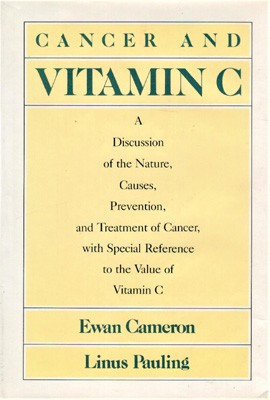 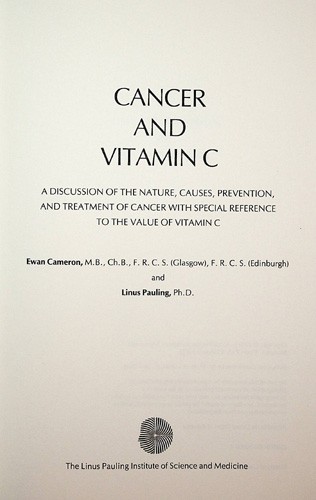 Cancer and Vitamin C. A Discussion of the Nature, Causes, Prevention, and Treatment of Cancer with Special Reference to the Value of Vitamin C

By: Cameron, Ewan and Pauling, Linus

1979 SIGNED FIRST EDITION LINUS PAULING'S ARGUMENT FOR HIGH-DOSE VITAMIN C IN CANCER TREATMENT. 9 1/2 inches tall hardcover, publisher's tan cloth covers, blue cloth spine with gilt title, inscribed front free endpaper To Peter Ladd Gilsey--Linus Pauling. 238 pp, corners bumped, very good in very good dust jacket. LINUS PAULING (1901-1994) was one of the founders of the fields of quantum chemistry and molecular biology. Pauling also worked on the structures of biological molecules, and showed the importance of the alpha helix and beta sheet in protein secondary structure. Pauling's approach combined methods and results from X-ray crystallography, molecular model building and quantum chemistry. His discoveries inspired the work of James Watson, Francis Crick, and Rosalind Franklin on the structure of DNA, which in turn made it possible for geneticists to crack the DNA code of all organisms. For his scientific work, Pauling was awarded the Nobel Prize in Chemistry in 1954. For his peace activism, he was awarded the Nobel Peace Prize in 1962. He is one of four individuals to have won more than one Nobel Prize (the others being Marie Curie, John Bardeen and Frederick Sanger). Of these, he is the only person to have been awarded two unshared Nobel Prizes. In 1941, at age 40, Pauling was diagnosed with Bright's disease, a renal disease. Following the recommendations of Thomas Addis, who actively recruited Ava Helen Pauling as nutritionist, cook, and eventually as deputy 'doctor', Pauling was able to control the disease with Addis's then-unusual low-protein salt-free diet and vitamin supplements. Thus Pauling's initial â€“ and intensely personal â€“ exposure to the idea of treating disease with vitamin supplements was positive. In 1973, with Arthur B. Robinson and another colleague, Pauling founded the Institute of Orthomolecular Medicine in Menlo Park, California, which was soon renamed the Linus Pauling Institute of Science and Medicine. Pauling directed research on vitamin C, but also continued his theoretical work in chemistry and physics until his death. Pauling's work on vitamin C in his later years generated much controversy. He was first introduced to the concept of high-dose vitamin C by biochemist Irwin Stone in 1966. After becoming convinced of its worth, Pauling took 3 grams of vitamin C every day to prevent colds.[4] Excited by his own perceived results, he researched the clinical literature and published Vitamin C and the Common Cold in 1970. He began a long clinical collaboration with the British cancer surgeon Ewan Cameron in 1971 on the use of intravenous and oral vitamin C as cancer therapy for terminal patients. Cameron and Pauling wrote many technical papers and a popular book, Cancer and Vitamin C, that discussed their observations. A re-evaluation of the claims in 1982 found that the patient groups were not actually comparable, with the vitamin C group being less sick on entry to the study, and judged to be terminal much earlier than the comparison group. Later clinical trials conducted by the Mayo Clinic also concluded that high-dose (10,000 mg) vitamin C was no better than placebo at treating cancer and that there was no benefit to high-dose vitamin C. Nearly 40 years after publication of Cancer and Vitamin C, additional studies are ongoing. EWAN CAMERON (1922-1991) was a Scottish physician who worked with Linus Pauling on Vitamin C research. He received his medical degree from the University of Glasgow in 1944, and immediately joined the British Army, where he served as a medical officer in Burma for three years. In 1971, Cameron began corresponding with Dr. Linus Pauling. He completed many scientific studies in conjunction with the institute, and published Cancer and Vitamin C with Pauling in 1979. After retirement from Vale of Leven Hospital in 1982, Cameron was invited to become Medical Director and Senior Research Professor at the Linus Pauling Institute, where he worked closely with Pauling on many research topics. PROVENANCE: PETER LADD GILSEY (1924-2010) was an asset manager in Washington DC.

Title: Cancer and Vitamin C. A Discussion of the Nature, Causes, Prevention, and Treatment of Cancer with Special Reference to the Value of Vitamin C

Cancer and Vitamin C. A Discussion of the Nature, Causes, Prevention, and Treatment of Cancer with Special Reference to the Value of Vitamin C