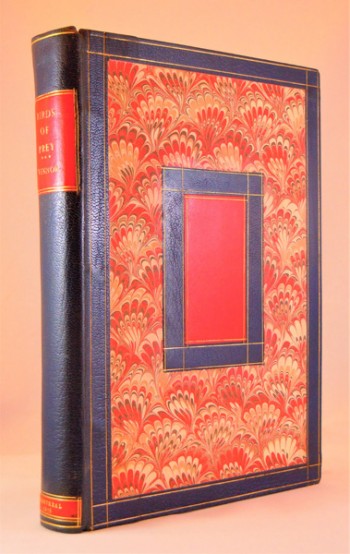 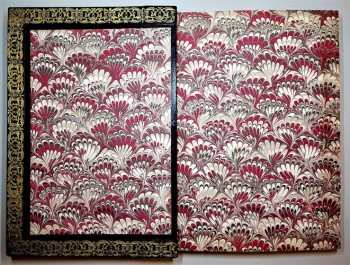 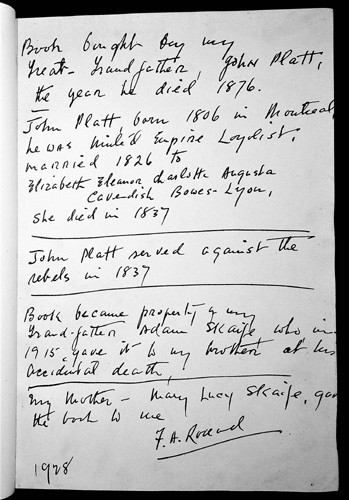 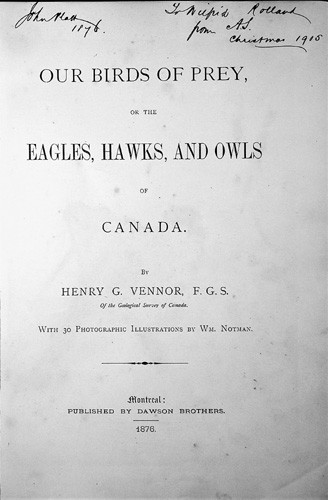 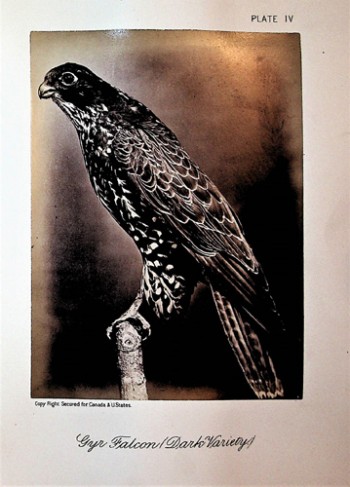 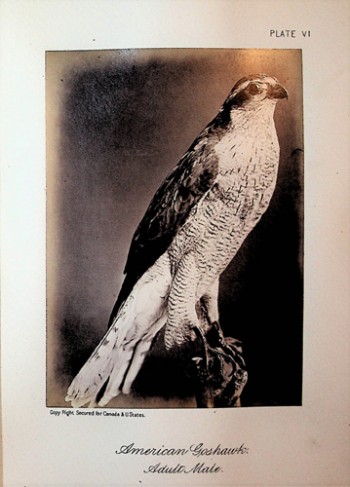 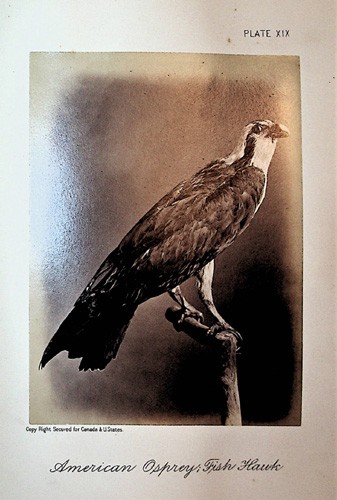 Our Birds of Prey, or the Eagles, Hawks, and Owls of Canada, with 30 Photographic Illustrations by Wm. Notman

FINELY BOUND BOOK OF ORIGINAL PHOTOGRAPHS OF BIRDS BY 19TH CENTURY NOTED CANADIAN PHOTOGRAPHER. 10 1/2 inches tall hardcover, recent black leather binding, elaborate gilt-ruled covers and spine with hand marbled paper and red leather inserts, marbled endpapers, viii, 154 pp, 30 original large sepia albumen photographs mounted on verso of leaves of printed cardstock (Plate XVIII inserted as frontispiece); age toning of original endpapers and preliminary pages, rippling of pages with mounted photographs as in all copies of this book. Very good. PROVENANCE: signature of John Platt, 1876 left top of title page, also inscribed To Wilfred Rolland from A.S. Christmas 1915, right top of page; Inscription on front endpaper: Book bought by my great-grandfather, John Platt, the year he died, 1876. John Platt born 1806 in Montreal, he was Empire Loyalist, married 1826 to Elizabeth Eleanor Charlotte Augusta Cavendish Bowes-Lyon, she died in 1837./ John Platt served against the rebels in 1837/ Book became property of my grandfather Adam Skaife, who in 1915 gave it to my brother At his accidental death, my mother--Mary Lucy Skaife, gave the book to me. F. A. Rolland, 1928. ADAM SKAIFE was a trading partner with the Molson brothers, brewers in the Province of Quebec. HENRY GEORGE VENNOR (1840 â€“ 1884) was a Canadian geologist and ornithologist. After high school he attended McGill College, where he studied natural sciences and civil engineering under the geologists John William Dawson and Thomas Sterry Hunt, graduating with honours in 1860. While a student Vennor collected Montreal Island fossils and wrote on ornithology for the Canadian Naturalist and Geologist and the British American Magazine of Toronto. After McGill, he joined the trading company of John Frothingham and William Workman in Montreal, then in 1865 accepted an apprenticeship under Sir William Edmond Logan, director of the Geological Survey of Canada, becoming a full member a year later. For fifteen years he worked on the geology of Ontario and Pontiac County, Quebec. WILLIAM NOTMAN (1826-1891) founded the Notman photographic studio in 1856. During its 78 years in operation, the studio and the personal history of its founder were closely linked. After finishing his studies in Scotland, Notman began his career in business by working in the family firm. But when it ran into financial difficulties he decided to move to MontrÃ©al. When he arrived, the city was buzzing with activity, so in 1856 Notman opened his own photography studio. A short time later, James Hodges, the engineer for the Grand Trunk Railway, asked Notman to photograph the stages in the construction of the Victoria Bridge. In 1860, Notman photographed the Prince of Wales during his visit to MontrÃ©al, then placed over 350 of the photographs into a maple box. This box was presented to the Prince of Wales by the Canadian government, an honour that earned Notman the title of Photographer to the Queen. Also in 1860, Notman took part in the founding of the Art Association of Montreal, and the association's very first meeting was held in Notman's Bleury Street studio. The studio flourished and by 1874 it had 55 employees. At one time Notman employed as many as six or eight photographers, and by the end of his 35-year career he had provided work for more than 40 photographers. Notman's photographers immortalized the most influencial men and women of the day, the most beautiful panoramas, the wildest and the most developed regions in the country, the latest technological advances and First Nations peoples. Notman exploited the commercial potential of photography to the fullest, offering his customers a wide variety of products. Between 1865 and 1868 Notman published Portraits of British Americans with biographical sketches and collaborated with the author W. George Beers in producing three portfolios of sports photographs. Notman also received medals at the world exhibition in MontrÃ©al in 1860, in London in 1862, in Paris in 1867 and 1878, in Australia in 1877 and again in London in 1886

Title: Our Birds of Prey, or the Eagles, Hawks, and Owls of Canada, with 30 Photographic Illustrations by Wm. Notman

Our Birds of Prey, or the Eagles, Hawks, and Owls of Canada, with 30 Photographic Illustrations by Wm. Notman