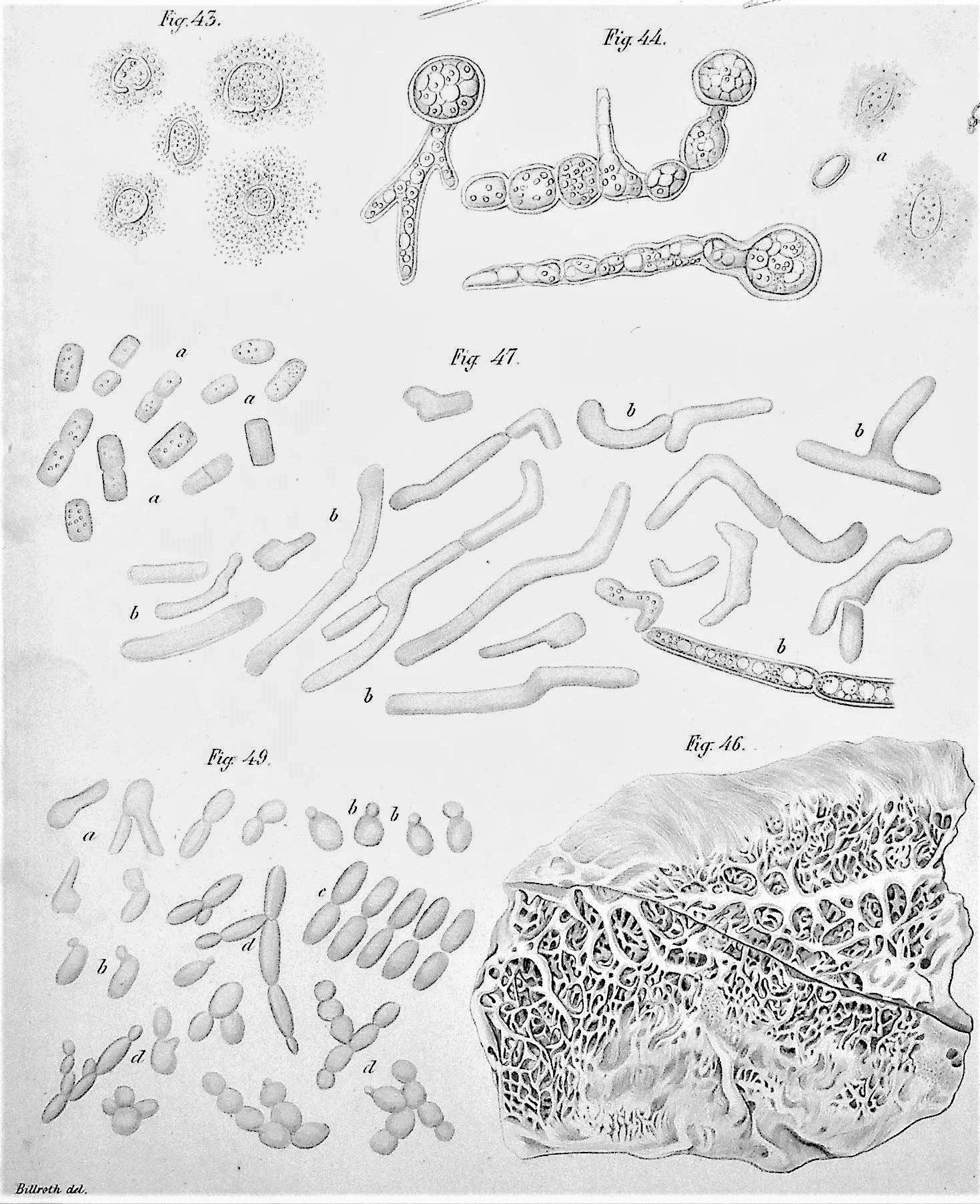 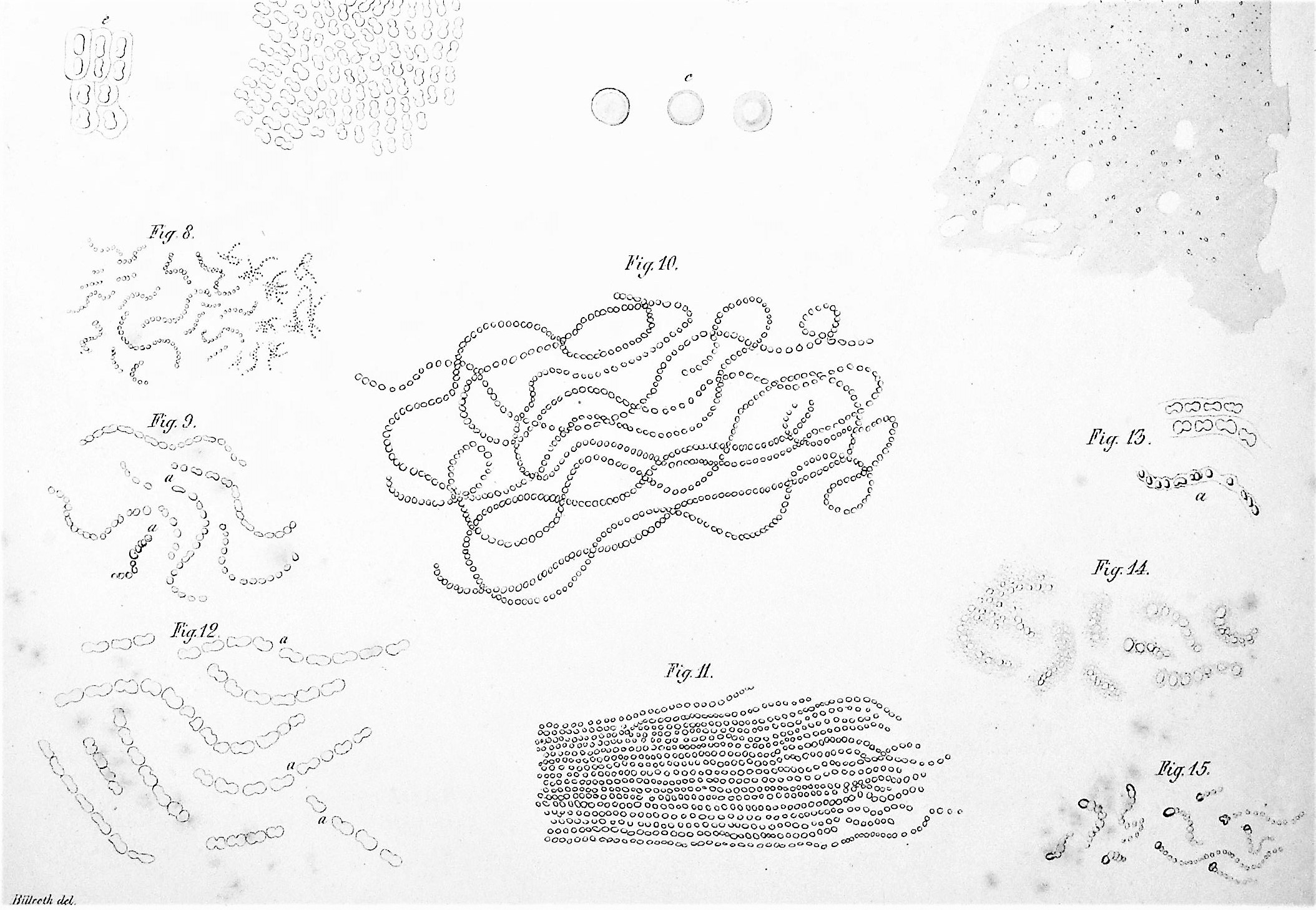 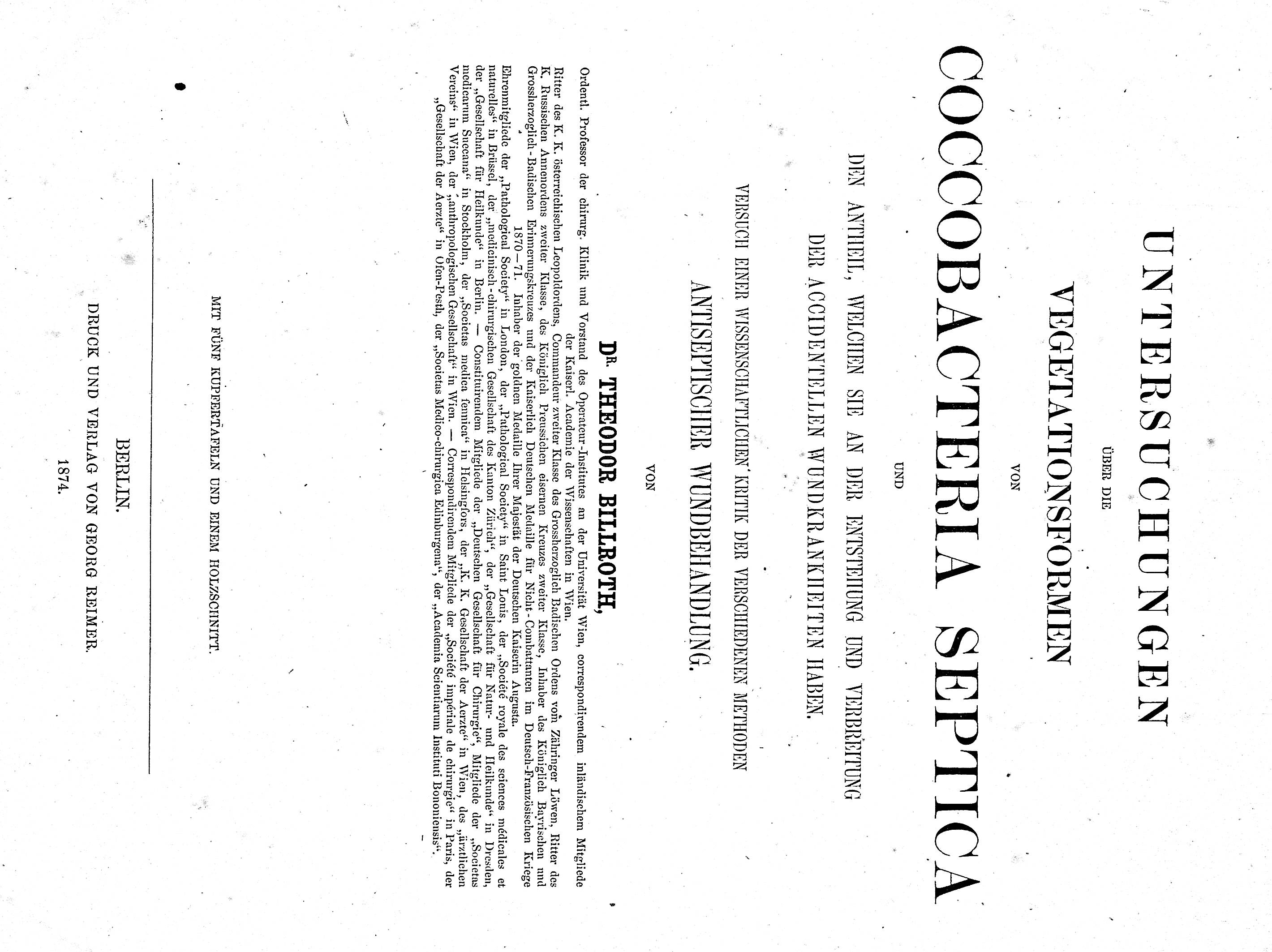 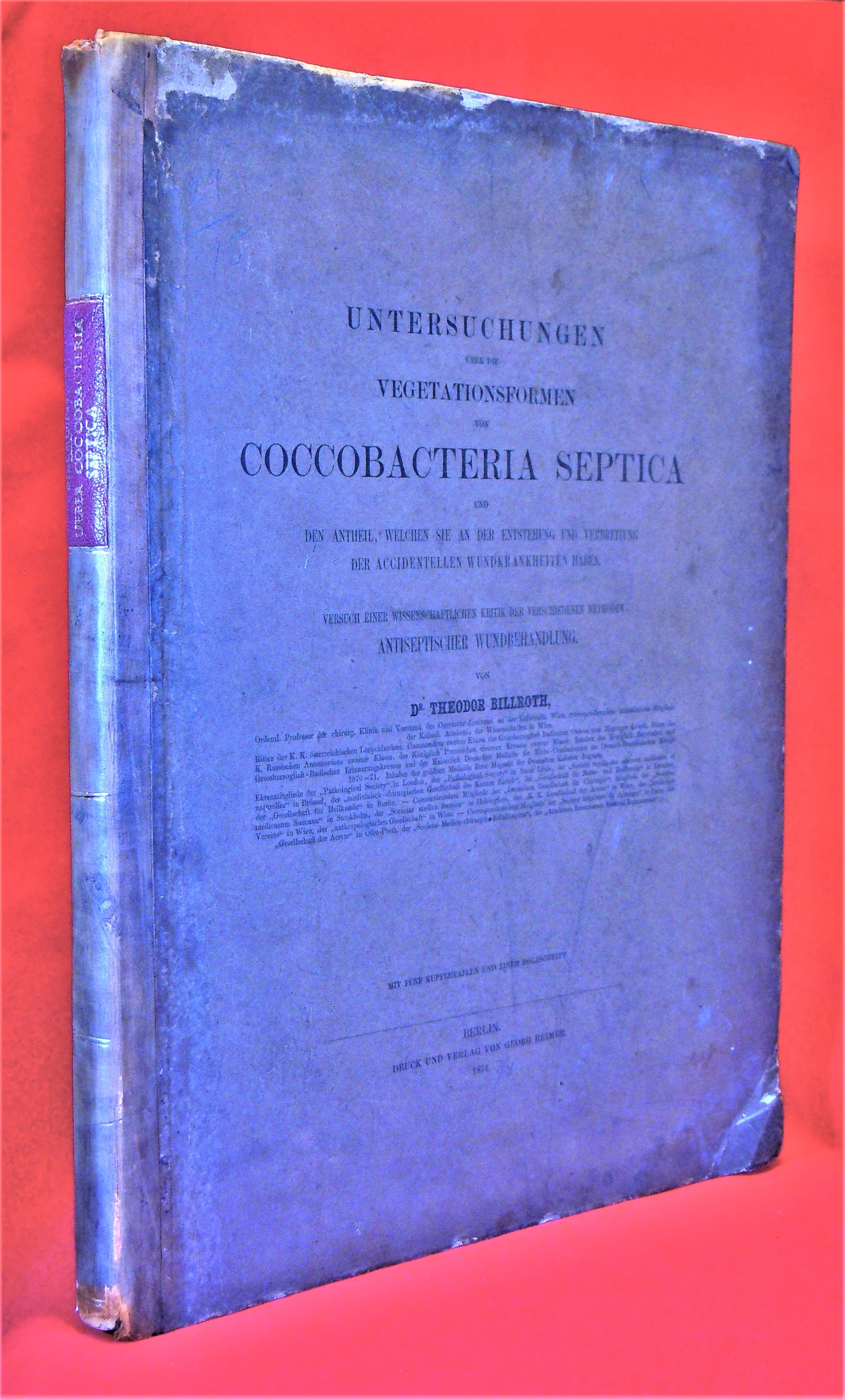 RARE 1874 FOLIO FIRST EDITION OF LANDMARK DESCRIPTION OF STREPTOCOCCAL WOUND INFECTION BY FOUNDING FATHER OF ABDOMINAL SURGERY. 12x15 inches tall folio, orginal printed brown paper covered boards with leather spine, gilt title to red leather label, xiv, 244 pp, 1 text illustration, 5 copper plates engraved by Wilhelm Grohmann. Cover edges rubbed and soiled, corners bumped, spine ends frayed, later endpapers, old water stain to lower right corner of preliminary pages, marginal age-toning, text and plates unmarked, overall good+. THEODOR BILLROTH (1829-1894) was an Austrian surgeon. regarded as the founding father of modern abdominal surgery. Torn between a career as a musician or as a physician, he acceded to his mother's wishes and enrolled himself at the University of Greifswald to study medicine, but gave up the whole of his first term to the study of music; Professor Wilhelm Baum, however, took him with him to GÃ¶ttingen, and his medical career was fixed. He then followed Professor Baum to the University of GÃ¶ttingen, and completed his medical doctorate at the Frederick William University of Berlin in 1852. In 1860, Billroth accepted an offer from the University of Zurich to become the Chair of Clinical Surgery, becoming director of the surgical hospital and clinic in Zurich. He was appointed professor of surgery at the University of Vienna in 1867. Though he laid the foundation of his fame at Zurich, it was in Vienna that he established himself as the power that he was in the surgical world. He did not limit himself to surgery only, and conducted extensive research on an ailment that affected many surgery patients at the time: wound fever. His treatise on wound fever, Untersuchungen Ã¼ber die Vegetationsformen von Coccobacteria septica, â€œInvestigations of the Vegetal Forms of Coccobacteria septica,â€ was the first description of streptococcal wound infection. He described these â€œsmall organisms (Kettenkokken) as found in either isolated or arranged in pairs, sometimes in chains of four to twenty or more links (Streptococcus; Gr. strepto, a chain, and coccus, a berry).â€ The importance of streptococci to history came in 1879 when Louis Pasteur isolated the microorganism from the uteruses and blood of women with puerperal fever. Billroth was quick to use antiseptic techniques in his surgical practice, and the number of surgical patients afflicted with wound fever greatly decreased. Billroth was instrumental in establishing the first modern school of thought in surgery. He had radical ideas on surgical training, advocating a prolonged surgical apprenticeship on completion of medical studies consisting of preliminary work in hospitals followed by performing operations on cadavers and experimental animals. This would be followed by a 2-3 year assistantship in a surgical department with studies of the surgical literature and the acquisition of advanced practical skills. William Halsted's pioneer surgical residency program was greatly influenced by Billroth's own methods of surgical education. Billroth was a talented amateur pianist and violinist. He met Brahms in the 1860s, when the composer was a rising star of the Viennese musical scene. They became close friends and shared musical insights. Brahms frequently sent Billroth his original manuscripts in order to get his opinion before publication, and Billroth participated as a musician in trial rehearsals of many of Brahms' chamber works before their first performances. Brahms dedicated his first two string quartets, Opus 51, to Billroth. WILHELM FRIEDRICH AUGUST GROHMANN (1835-1918) , engraver of the plates, was scientific illustrator for the Imperial Office of Public Health in Berlin. HEAVY ITEM--INQUIRE FOR SHIPPING COSTS.