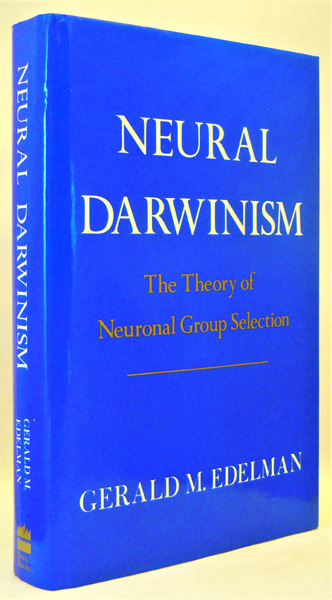 NEURAL DARWINISM SIGNED BY NOBEL AUTHOR GERALD EDELMAN -- COPY OF NOBEL RECIPIENT FRANCIS CRICK, WHO DUBBED THE BOOK NEURAL EDELMANISM. 9 1/2 inches tall hardcover, navy blue cloth binding, gilt title to spine, xxii, 371 pp, color and black & white illustrations, handstamp of Prof. F.H.C. Crick to front free endpaper, signature of author top of title page, very good in very good dust jacket. GERALD M. EDELMAN (1929 â€“ 2014) was an American biologist who shared the 1972 Nobel Prize in Physiology or Medicine for work with Rodney Robert Porter on the immune system. Edelman's Nobel Prize-winning research concerned discovery of the structure of antibody molecules. In interviews, he has said that the way the components of the immune system evolve over the life of the individual is analogous to the way the components of the brain evolve in a lifetime. There is a continuity in this way between his work on the immune system, for which he won the Nobel Prize, and his later work in neuroscience and in philosophy of mind. Obituary published in Science, 27 June 2014: Edelman's work in the 1960s revealed the chemical structure of antibody molecules, for which he received the Nobel Prize in 1972. While the discovery of the structure of antibody and of CAMs are undisputed landmarks in biology, the theory of nruronal group selection, also known as Neural Darwinism from the title of Edelman's book and dubbed 'neural Edelmanism' by Francis Crick, has remained controversial and not well understood. Yet there are good reasons to believe that Neural Darwinism represents Edelman's most important legacy and that it will endure as a classic. When Neural Darwinism was published, the extent to which the brain is plastic was unclear. Today, demonstrations of plasticity fill neruoscience publications, vindicating Edelman's stance, and we now realize that almost any encounter with the environment during a waking day will strengthen many brain circuits. PROVENANCE: FRANCIS H. C. CRICK (1916 â€“ 2004) was a British molecular biologist, biophysicist, and neuroscientist. In 1953, he co-authored with James Watson the academic paper proposing the double helix structure of the DNA molecule. Together with Watson and Maurice Wilkins, he was jointly awarded the 1962 Nobel Prize in Physiology or Medicine for their discoveries concerning the molecular structure of nucleic acids and its significance for information transfer in living material. His later research centered on theoretical neurobiology and attempts to advance the scientific study of human consciousness. In the 1980s, Crick was able to devote his full attention to his other interest, consciousness. His autobiographical book, What Mad Pursuit: A Personal View of Scientific Discovery, includes a description of why he left molecular biology and switched to neuroscience. Crick published a book describing how neurobiology had reached a mature enough stage so that consciousness could be the subject of a unified effort to study it at the molecular, cellular and behavioural levels. Crick's book The Astonishing Hypothesis made the argument that neuroscience now had the tools required to begin a scientific study of how brains produce conscious experiences. It is notable that Crick dubbed Neural Darwinism neural Edelmanism in deference to its proponent.

Inscription: Signed by one Nobel laureate to another