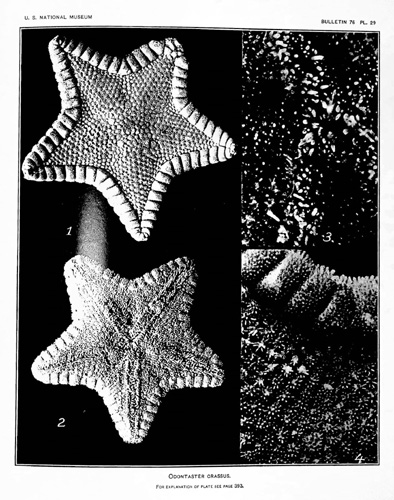 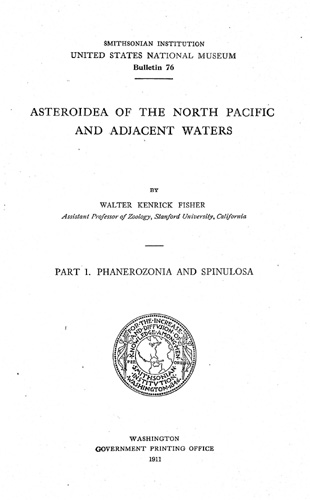 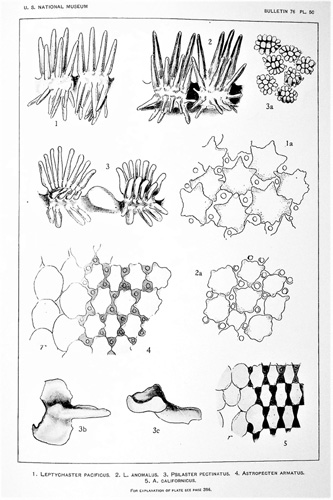 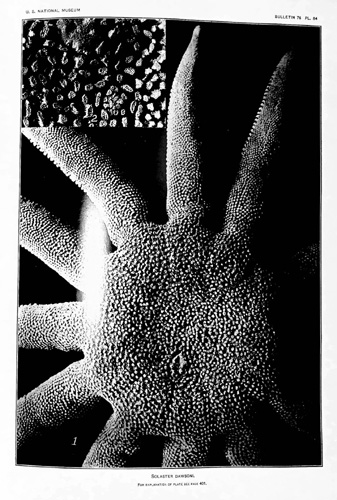 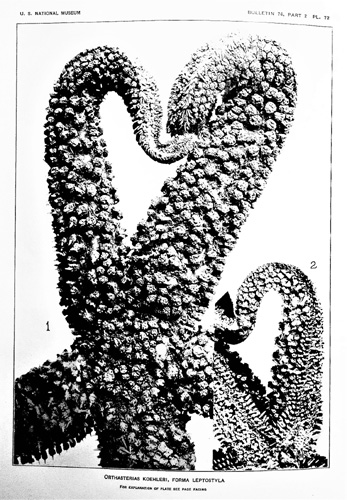 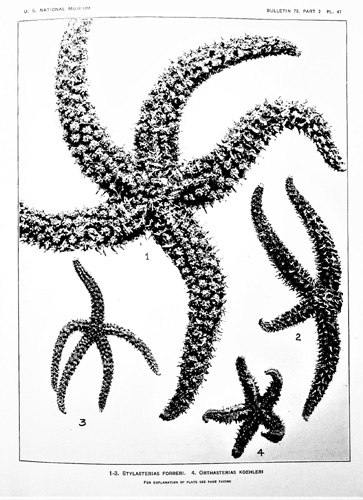 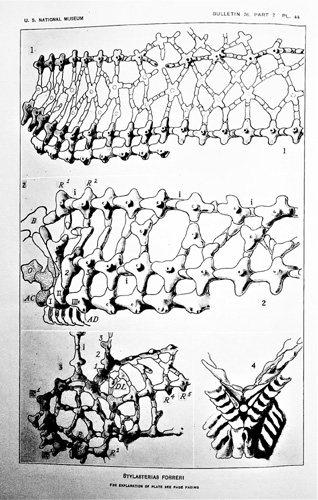 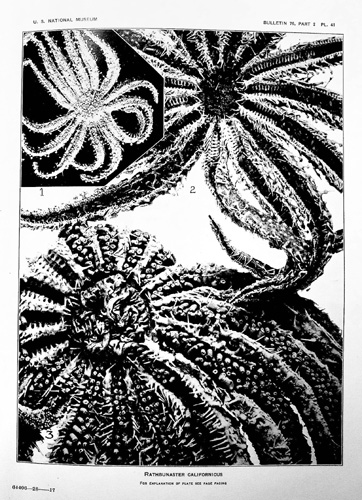 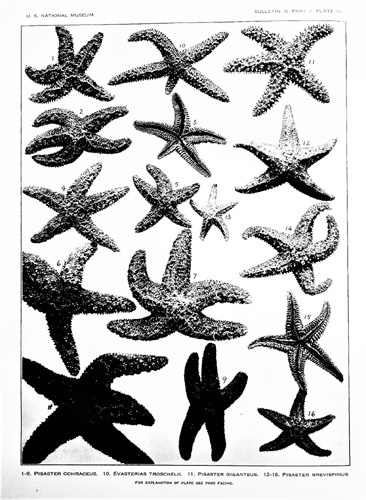 Asteroidea of the North Pacific and Adjacent Waters

TWO MASSIVE VOLUMES CONTAIN 296 SUPERB PLATES OF PACIFIC STARFISH BY WALTER FISHER, DIRECTOR OF THE HOPKINS MARINE STATION ON THE MONTEREY PENINSULA. Two hardbound volumes 12 inches tall, 2 inches thick, red cloth binding, gilt titles to spines, Vol. I, Part I. Phanerozonia and Sinulosa, vi, 406 pp, 122 black & white plates, index pp 407 - 419; Vol. II (2 volumes combined with original paper covers bound in). Part 2. Forcipulata (Part), iv, 1-161 pp, 81 plates pp 162-242 descriptions, pp 243-245 index; Part 3. Forcipulata (Concluded), iv, 1-255 pp, 93 plates pp 256-348 descriptions, 349-355 index. The volumes are unread and as new. WALTER KENRICK FISHER (1878 - 1953) was an American zoologist, evolutionary biologist, illustrator and painter. Fisher began his studies at Stanford University as an undergraduate in 1897, he graduated with a bachelor's degree in 1901, obtained a master's degree in 1903 with a dissertation called The anatomy of Lottia gigantea Gray and his Ph.D, thesis was The starfishes of the Hawaiian Island in 1906. He worked as a field naturalist for the US Biological Survey on two of the M.V. Albatross expeditions of the United States Fish Commission, in the summers of 1902 and 1904. This experience, the diversity of the specimens collected which he was able to study while on these voyages, and his examination of other invertebrate collections, led him to undertake a specialism in echinoderms. In 1906 he published the Starfishes of the Hawaiian Islands which was an account of the specimens collected during the 1906 expedition of the M.V. Albatross. This was followed in 1911 by Asteroidea of the North Pacific and Adjacent Waters, a monograph published by the U. S. National Museum which contained 400 pages, illustrated by Fisher with over 100 plates. The second part of this work came out in 1928, and the third in 1930, parts 2 and 3 combined being almost the same size as part 1. Fisher was appointed as an assistant in the Zoology Department from 1902 to 1905, he was then an instructor between 1905 and 1909, before gaining the position of assistant professor from 1909 to 1925 and he ended his career as a professor, a status he gained in 1925 and retained until his retirement in 1943. He was also Director of the Hopkins Marine Station from 1917 up to his retirement. Fisher and Ed Ricketts were said not to get along as Fisher had tried to stop the publication of Ricketts' Between Pacific Tides because it was too radical. As a result, it was said that Ricketts would wait for Fisher to be away from the Station to access its library for information, but Fisher still named an echiurid worm, Thalassema steinbecki, for Ricketts' friend, John Steinbeck, in 1946 as an expedition led by Steinbeck had collected the type specimens. However, in a letter in response to questions about the validity of Steinbeck's and Ricketts' collaboration on The Log from the Sea of Cortez Steinbeck wrote Dr. Fisher of the Hopkins Marine Station once said that Ed Ricketts and I together were the best single speculative zoologists in the world, and if he couldn't separate us, I would suggest that you do not try. The crinoid Parametra fisheri (Clark, 1908), the sea stars Nepanthia fisheri Rowe & Marsh, 1982, Astroceramus fisheri Koehler, 1909, the chiton Callistochiton fisheri W. H. Dall, 1919 and the peanut worm subgenus Fisherana Stephen, 1965 have all been named in honor of Fisher. HEAVY ITEMS REQUIRE EXTRA SHIPPING COSTS--PLEASE INQUIRE BEFORE PLACING ORDER.

Title: Asteroidea of the North Pacific and Adjacent Waters

Asteroidea of the North Pacific and Adjacent Waters