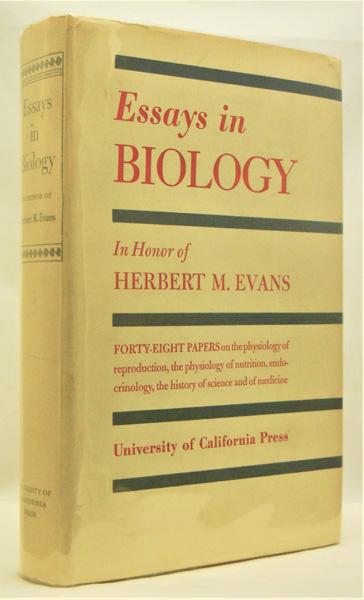 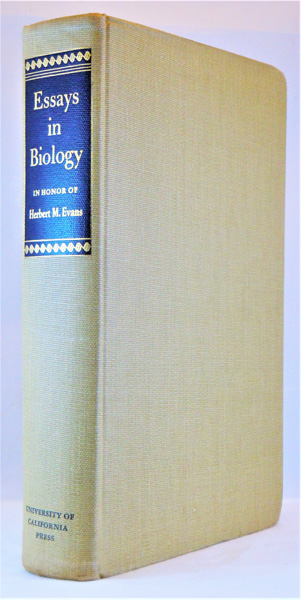 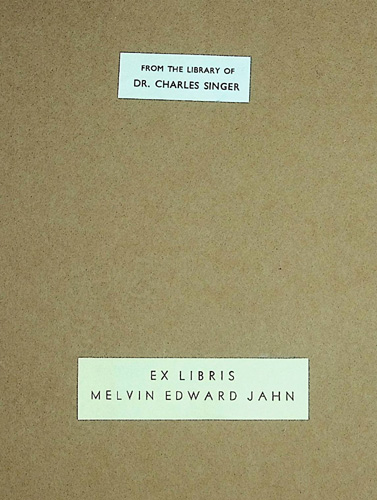 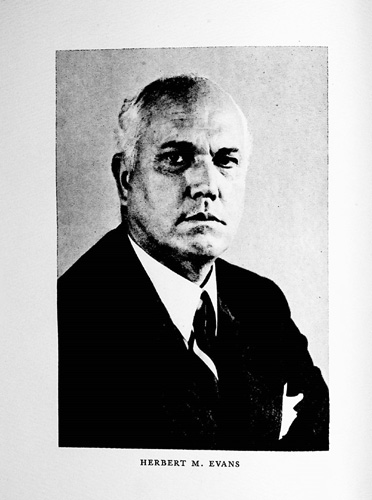 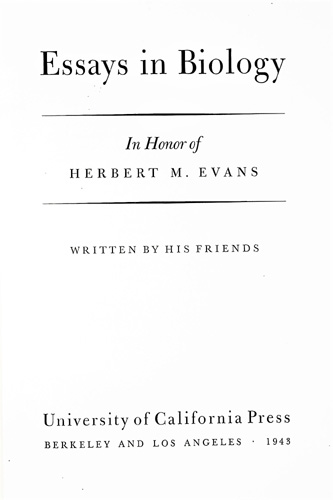 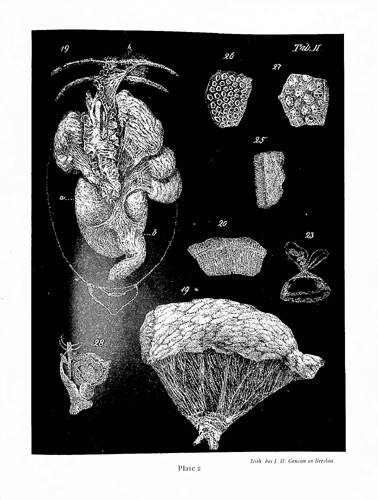 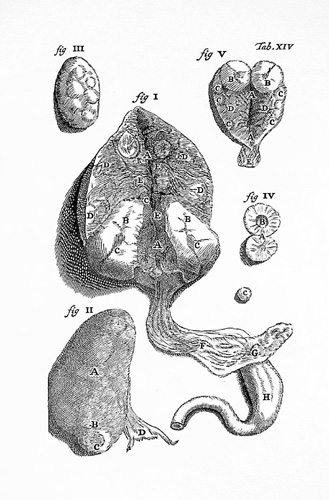 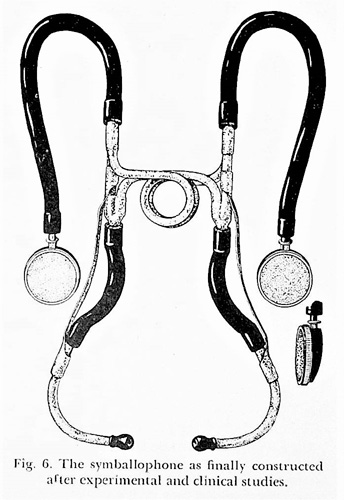 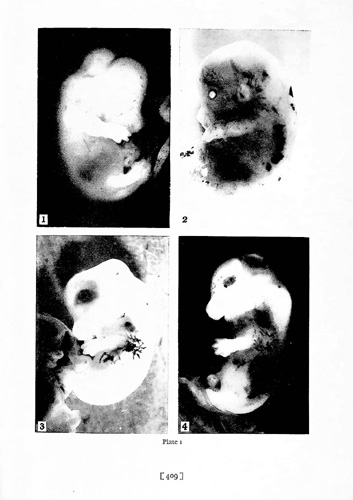 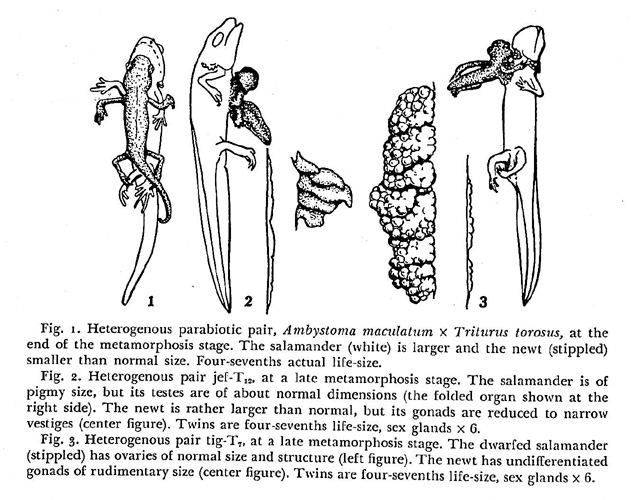 Essays in Biology in Honor of Herbert M. Evans

IMPORTANT ASSOCIATION COPY OF 3 EMINENT BIBLIOPHILES OF SCIENCE IN THE BERKELEY CIRCLE: FESTSCHRIFT FOR HERBERT EVANS, COPY OF CHARLES SINGER AND MELVIN EDWARD JAHN. 10 1/2 inches tall hardcover, tan cloth binding, gilt title to spine, bookplates of Dr. Charles Singer and Melvin Edward Jahn to front paste-down, frontis portrait of Herbert M. Evans, xxvii, 684 pp, many illustrations, plate with facing descriptive text; corners bumped, edges soiled, binding tight, very good in very good dust jacket. HERBERT McLEAN EVANS (1882 - 1971) was a U.S. anatomist and embryologist. In 1908, he obtained his medical degree from Johns Hopkins University, eventually becoming its associate professor of anatomy. Evans moved back to California in 1915 and was made professor of anatomy at the University of California, Berkeley, and held that position until his death. His medical research at Berkeley addressed problems relating to human nutrition, endocrinology, embryology, and histology. In 1918, his research into the number of human chromosomes led him to believe the number to be 48, when most people assumed the number to be much higher. It was only later discovered that the correct figure was 46. Evans had much greater success however with hormones extracted from the anterior lobe of the pituitary gland. He isolated human growth hormone, which was essential for human growth and development. In 1922 along with Katharine Scott Bishop, during feeding experiments on rats, he co-discovered Vitamin E which is needed for human reproduction. Evans became director of the Institute of Experimental Biology at Berkeley, in 1931. He continued his research on vitamine E and was finally able to isolate the pure compound from wheat germs in 1937. He was also instrumental in developing reproductive systems research with Miriam Sipson and C.H. Li, by studying the oestrus cycle of rats. Evans is also credited with developing Evans blue, a method which determines blood volume in humans and animals. PROVENANCE: CHARLES JOSEPH SINGER (1876 - 1960) accepted a commission as medical officer in the British Army in 1916, first as a pathologist and then as part of an archaeological expedition. At war's end, he returned to Oxford to lecture on the history of biology. In 1920 he was appointed to a lectureship in the history of medicine at University College of the University of London. He became president of the History of Medicine Society at the Royal Society of Medicine in London, in 1920. [1] His reputation extended beyond England, and in 1929 he accepted an invitation to lecture at Johns Hopkins University the following year. Johns Hopkins was also interested in offering him a permanent post, but their delay allowed the University of London to award him an honorary chair, which he accepted. By the time Johns Hopkins made their formal offer, he was satisfied with his position in London and declined their offer. The Singers spent time in Berkeley where Charles spent three months as a visiting lecturer at the University of California, after which they returned home to London. He was invited again by the University of California at Berkeley to lecture in 1932, an occasion that the Singers used to circle the globe going westward, spending about sixteen months away from England. On their return, Singer resumed his post at UCL, where he remained until his retirement in 1942. MELVIN EDWARD JAHN (1938 - 2003) was the youngest and the last of the great Berkeley scientific book collectors. It has often been noted that there is a certain contagion to book-collecting. Influential bibliographies, historic events or inspiring personalities can establish a vogue. Admiration, emulation and rivalry sustain it, but when the stimulus is withdrawn, or the circle of enthusiasts is dispersed or dies off, the epidemic is over. At the University of California it ran for just over a century. The taste for scientific books was well established at Berkeley in the 1890â€™s, by the botanists E.L. Greene, W.L. Jepson, H.M. Hall and W.A. Setchell, each collecting within their specialty, from a taxonomic and historical point of view. The taste became a mania by the 1920â€™s, with the advent of two omnivorous collectors, Charles Atwood Kofoid and Herbert McLean Evans. Evans never had more than a few thousand volumes on hand at any given moment, but circulated some 20,000 books in the course of his career. Bridson and Jacksonâ€™s Naturalistsâ€™ Libraries lists sixteen catalogues from which Evansâ€™s books were recorded and dispersed between 1930 and 1975. Every leading American history of science library has at least a few volumes that once were his. Evans was an inspiring and flamboyant presenceâ€”a bookseller manquÃ©. He clearly captivated the young Jahn in his student days at Berkeley in the late 1950â€™s, tempting him with dealersâ€™ catalogues and even passing on books from his library. Jahnâ€™s simple and elegant sans-serif book-labelâ€”Ex Libris/Melvin Edward Jahnâ€”is obviously inspired by Evansâ€™s more elaborate bookplate. Here alone does Jahn use his full name (as never in scientific publications), echoing his mentorâ€™s resonant triplet.

Title: Essays in Biology in Honor of Herbert M. Evans

Essays in Biology in Honor of Herbert M. Evans